Leaders And Caricatures: Yet Another Episode Shows Why Criticism Through Cartoons Is A One-Way Street In Tamil Nadu 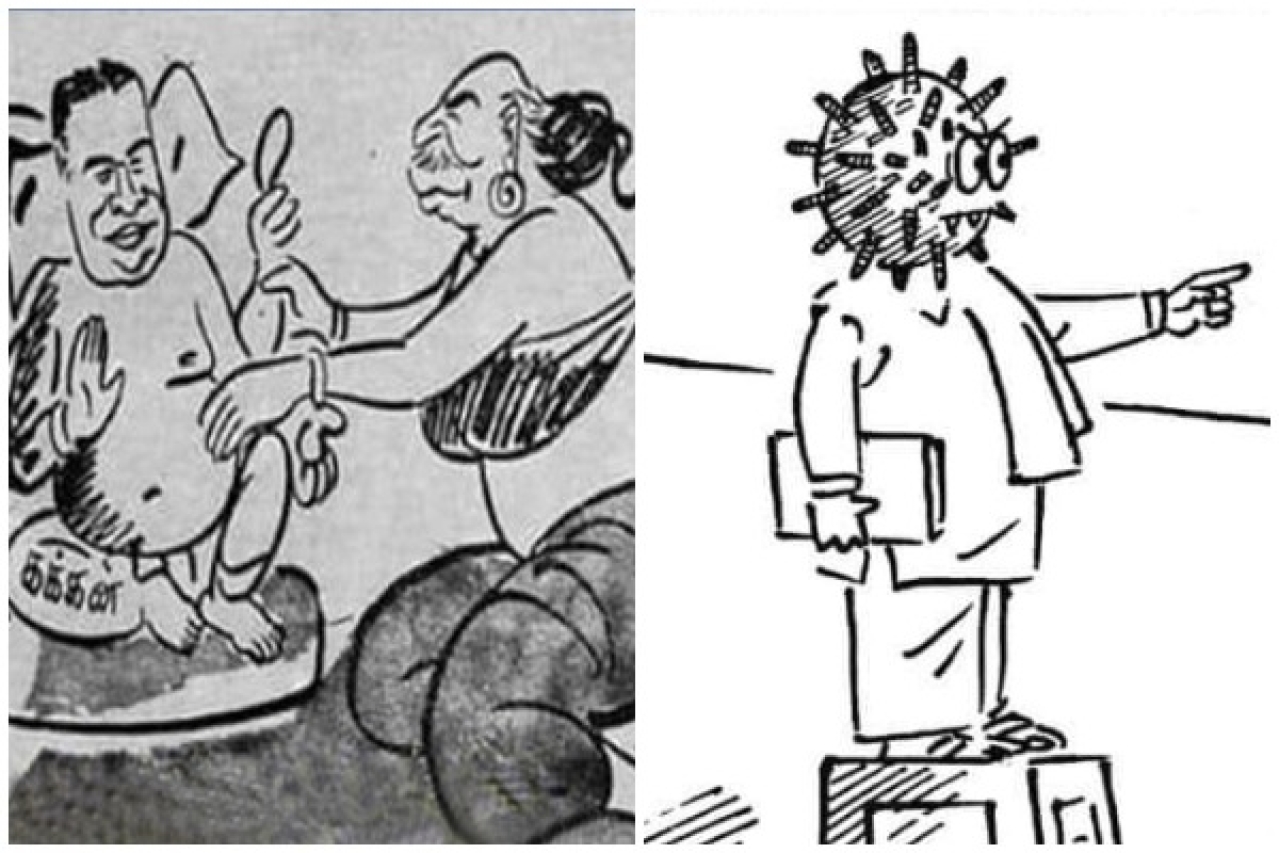 On 20 April 2020, amidst a national lock-down, a cartoon appeared in Dina Thanthi, a leading Tamil-language newspaper run by a popular cartoonist, Mathi.

The cartoon showed a statue of a leader with its face covered with a mask. The mask was of the form of the Sars-cov-2 virus. In the cartoon, a policeman is standing next to the statue and saying that it [the mask] was to create popular awareness during the lock-down and that it would be removed later. 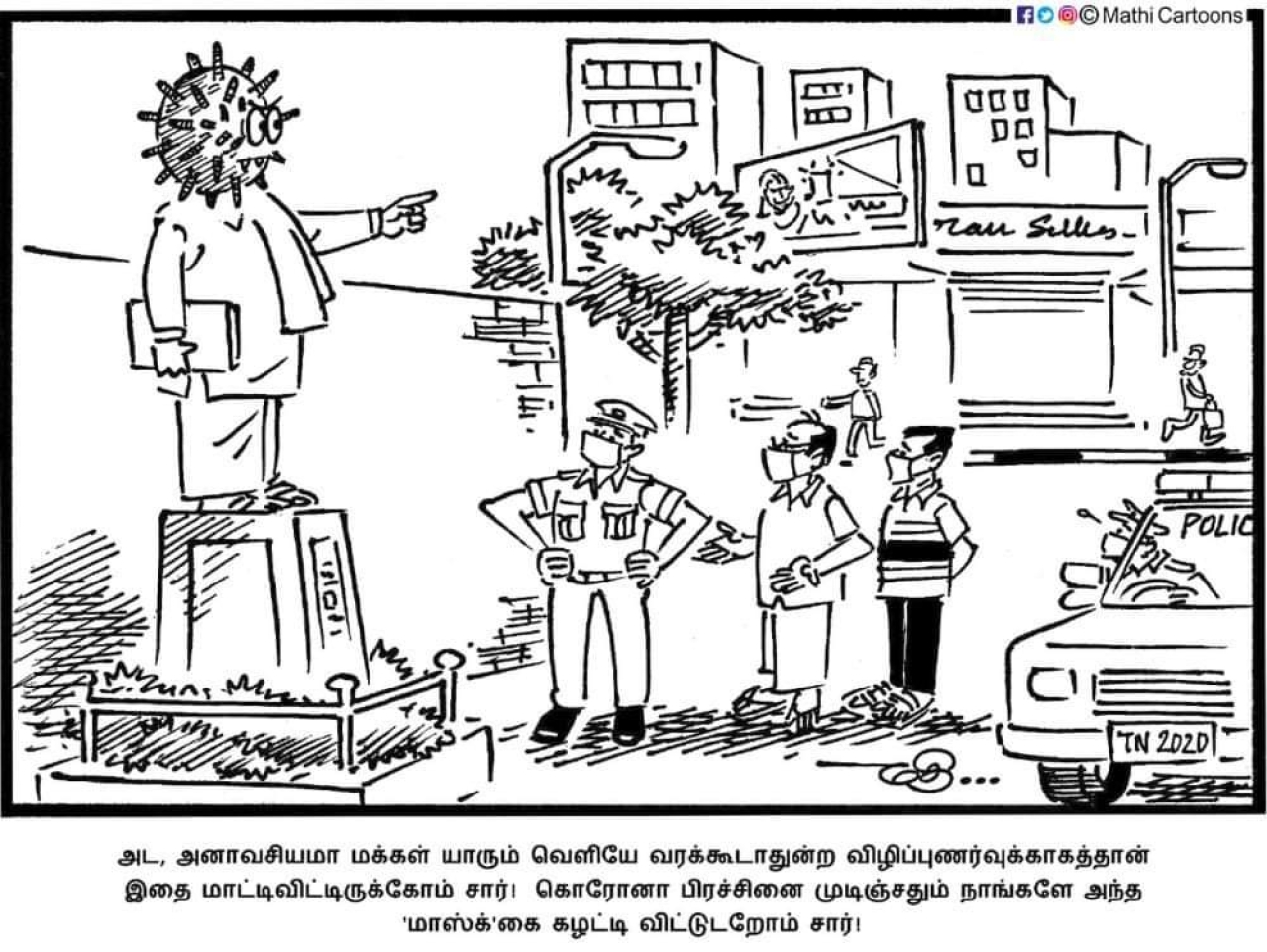 This cartoon led to an outcry from the Dravidianist parties because the statue depicted in it seemed to have a likeness to C N Annadurai - the former Chief Minister of Tamil Nadu and Dravida Munnetra Kazhagam (DMK) founder.

DMK Supremo M K Stalin issued a veiled warning to the newspaper. Those with no knowledge of history should not be allowed to insult their leaders he said.

Some years back, Dravidianist cadre had already demonstrated what they were capable of doing even to a friendly publication like Dinakaran, when it dared to criticise a dynast of the DMK’s first family.

The memory of the murderous attacks leading to deaths in the ‘Dinakaran’ office, during UPA-DMK rule, can make the media in Tamil Nadu tone down their criticism of the DMK.

The murderous violence against Dinakaran during the earlier UPA-DMK rule makes all newspapers in Tamil Nadu virtually obey DMK diktats.

So, Dina Thanthi issued an apology.

The outcry from the DMK and its digital minions led some people to dig into the past and unearth those caricatures which the DMK itself had made of its opponents. Opponents, who happened to be some of the greatest leaders Tamil Nadu has produced.

One such cartoon that the Dravidianists had made showed two leaders, who the Tamils hold in great respect, in a degrading way.

The cartoon should be considered as a quintessential specimen of the fundamental coda of Dravidianist politics itself.

To understand the level of depraved perversity of the Dravidianist cartoon, one should understand the life and legacy of Sri Kakkan, one of the two leaders demeaned by the cartoon.

His granddaughter, now a police officer, reminisced asking her grandfather once about the cane marks she saw on his skin.

The old man replied that they were scars from police beatings.

“Why did you get beaten up?”, the granddaughter asked.

Under K Kamaraj as Chief Minister for the state of Madras, Kakkanji held important portfolios including Home Affairs, Agriculture and Public Works. Yet, fiercely honest, he lived a poor man and died in self-embraced poverty.

To this day, Kakkanji is remembered as a personification of honesty - like the rishis one reads about in our epics and Puranas. 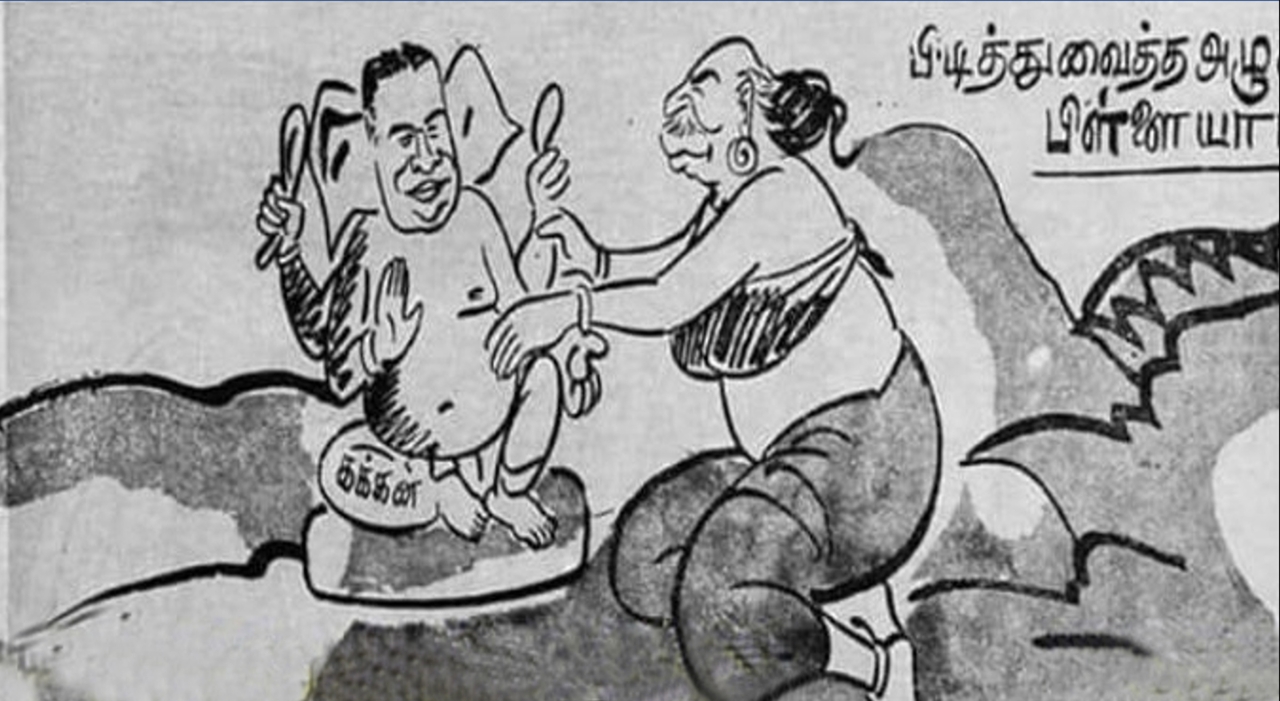 Now looking at the ‘cartoon’ or the rather hate-toon, one can see the visceral hatred the Dravidian movement had for the Dharma that emancipates the weakened sections of society.

To them, Kamaraj making Kakkanji powerful is similar to Parvati making Ganesha out of so-called dirt.

This Puranic version is a particular favourite of the pseudo-rationalists of the Dravidian variety to prove that Hindu Dharma is all superstitious nonsense. They disparagingly call Ganesha ‘Dirt-ball Ganesha’ and the same title is given to the cartoon too.

Kakkanji belonged to Scheduled Community. He fought with equal passion for social justice as he fought for the nation’s freedom. Whether it was the fight for water rights or for temple entry, he was in the forefront of many struggles.

Kakkanji was among the first batch of Scheduled Community Hindus to enter the famous Meenakshi Amman temple. He was part of the team led by Vaidhyanatha Iyer (1890 - 1955), the famous Gandhian freedom fighter.

When Iyer passed away, Kakkanji wrote a moving obituary for him. In the obituary, Kakkanji revealed how Iyer endured insults from the misguided elements of his own community with forbearance.

Like a son unto his father, Kakkanji participated in, and performed the last rites of Iyer.

‘Karma Veer’ Kamaraj, Kakkanji, and Vaidyanatha Iyer: Now Tamil Nadu suffers the ‘Karma’ of letting down such great souls who worked for social justice and harmony.

Vaidhyanatha Iyer, Kamaraj (called by Tamils as ‘Karma Veer’), Kakkanji - all of them represented the reform potential of true Sanatana Dharma. They strove simultaneously to remove social evils and social injustices, while bringing in social harmony.

On the other hand, the pantheon of the Dravidianist worthies, from EVR, to Anna and Karunanidhi, to the present generation of DMK leaders, represent the typical colonised mediocrity which uses social evils as political and propaganda capital to further its own interests.

The cartoon thus becomes proof of the consistent hatred that the Dravidianist movement harbours in its bosom since its inception through British colonial and evangelical stimuli.

Dravidian parties have always hated Hindu Dharma (calling it Brahminical and casteist) and have no affinity for the Scheduled communities either. Yet, they could always use the injustice suffered by the marginalised groups due to social stagnation to attack Sanatana Dharma.

It is unfortunate that the Dravidian movement, which should apologise to Tamils for misleading them for generations, should arm-twist newspapers and cartoonists for even the mildest alleged criticisms of their leaders.

This is the karma that Tamil Nadu is enduring for electing those who defiled some of the greatest of our leaders like Kamaraj and Kakkan.

Get Swarajya in your inbox everyday. Subscribe here.
Tags:
332 Shares