Left-Liberal Outrage Bogus: Why Soundararajan Was Right To Take Unruly Sofia To Court 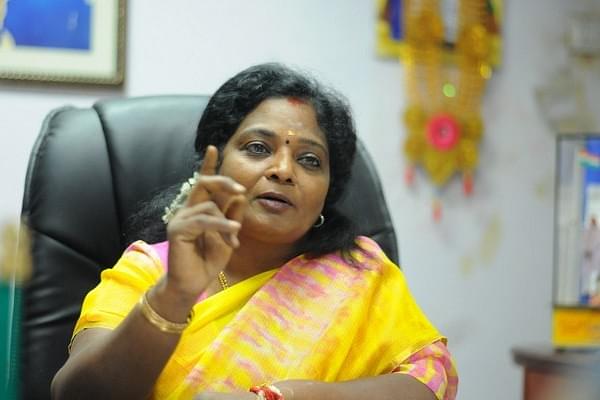 Predictably, the arrest and subsequent release of an unruly passenger named Lois Sofia, who tried to intimidate Tamil Nadu Bharatiya Janata Party (BJP) chief Dr Tamilsai Soundararajan was the talk of the social media yesterday (4 September). While partisanship almost always dictates whose side you are going to come down on, I think in the lead-up to what appears to be an extremely antagonistic 2019, it is important to put the left-liberal-opposition nexus’s howling on this issue in its proper context.

To start with, let’s call Sofia’s behaviour for what it was – an obnoxious, intolerant zealot’s demonstration of her nasty temper that within the confines of the aeroplane could have had very serious consequences for everyone. In the justifiably jittery post 9/11 world, where even NFL stars can get themselves arrested for a bomb joke, it was a staggeringly ill-advised and inconsiderate provocation and Dr Soundararajan was entirely justified in taking serious cognizance of it.

The Left-liberal-opposition axis, however, took very unkindly to it and exploded in outrage about the “fascist” government, arresting “student” for calling the government fascist. Veteran journalist Rajdeep Sardesai demanded that a copy of the Constitution be sent to the police and BJP, because you know creating a ruckus on an aeroplane is a fundamental right enshrined in the Constitution. Another journalist wanted to know on what basis did Dr Soundararajan accuse Sofia of being a terrorist, because as it was established Sofia had photographic evidence of Dr Soundararajan shaking hands with Mussolini himself before accusing the BJP leader of being a fascist!

Since when did shouting against a government become a âcrimeâ? Can someone please send a copy of the constitution to TN cops and the TN BJP chief please? https://t.co/HX5MWCkdS6

That the Left strongly believes in intimidation as a valid tool is an established fact. This in turn, stems from their fundamental belief that those in disagreement with them must be either stupid or morally deficient. Why waste time explaining your position to the stupid or the villains? We saw them do this when filmmaker and author Vivek Agnihotri tried to take his film to screen at the Jadhavpur University, we saw them do this when they recently tried to prevent the Pondy Lit Fest from taking place.

This tactic of invading people’s private space when they are in public, is merely an individual level set-up of the broader politics of intimidation. Like most of Indian Left’s idea, this too has its roots in the American Left tactics. As a guerilla tactic it works because:

1) It often catches people when their political guard is supposedly down, eating at a restaurant or boarding a plane.

2) These ugly confrontations in public places also serve as warning to the silent majority of the other side – “mess with us and we won’t let you fly in peace.”

3) Unlike demonstrations on college campuses, these kind of do-it-yourself intimidation attacks require no co-ordination and very little expense.

4) Lastly, this tactic conforms to Saul Alinsky’s rule for radical number 6 – “a good tactic is the one your people enjoy”.

There is nothing that the over-entitled, mollycoddled, snow-flake millennial social justice warriors enjoy as much as drowning out your opponent’s voice by screaming loudly.

For far too long, the Left has successfully employed another one of Saul Alinsky’s rule for radical – “make the opposition live up to their own rules”. Principle of free speech is not recognised in any country on the earth where the Left rules, but still when it comes to a democratic country, they will try to make their opponents live up to the principle of free speech even when it puts people’s safety and well being at risk.

There is of course the favourite Left-liberal twist to this story. We saw it during the intolerance debate earlier, and we saw it again now. Back then they cited critiques of intolerance rhetoric as proof of intolerance itself. Today they offered the lawful action taken against the miscreant as a proof of fascism. This is a little ‘heads, I win; tails, you lose’ situation – if you don’t respond to their charges, they will repeat them until it becomes the truth. If you refute whatever ridiculous assertion they are trying to make, they will wave that about as proof of the same assertion.

Only one problem. For this to work, and to expand exponentially (have no doubt, if left unchecked, you and I are in for similar harassment at the hands of the intolerant Left at least for the next year), your people need to be reasonably sure that they could get away with it. Inside every frothing-at-mouth liberal making “off-with-his-head” proclamations on social media, there is a coward crybully, who finds the idea that their actions have consequence inherently unfair. The miscreant had 16 lawyers appearing on her behalf, she got bail.

However, the fact that there could be legal consequences to such behaviour might scare a few of these social justice warriors away. Also as impressive as the Left ecosystem is and as vast an apparatus they have at their disposal, is it adequate to spring 1,000 such miscreants out of jail? If yes, is it cost effective?

And therein lies the core of the Left-liberal-opposition indignation over this. To them, by not turning the other cheek, or by not laughing off this criminal trespass of her private space, Dr Soundararajan chose one course of action that would force them to go down the rabbit hole they don’t want to.

For the next one year at least, this method of harassment could be a very potent tactic to scare at least a few of the BJP supporters away. But that only works if there is a clean getaway. If the Left hates anyone that disagrees with them, then they positively loathe someone who responds fire with fire. Their vision of an ideal world is where they are screaming “fascists” in the face of their opponents while the opponents, gently and with an apologetic smile, try to reason with them.

An opposition that calls a spade a spade and throws the law at them is a dangerous opposition, mostly because an anarchist ideology like Left can’t do much within the confines of law and order. You and I as common citizens, however, must understand the immense risk such tactics pose to our freedom of movement and personal safety, and continue to call out such uncouth behaviour whenever it happens.