Long Read: The Political Permutations In Punjab Assembly Elections Of 2022 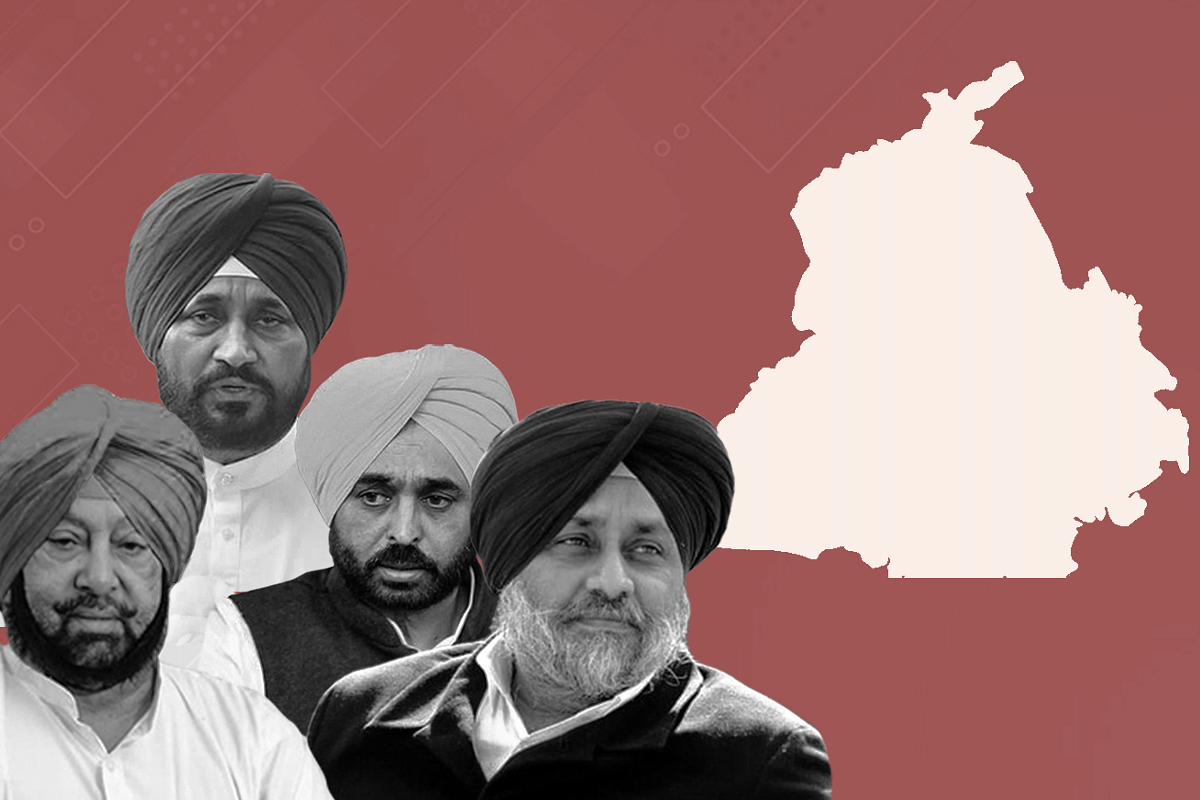 The battle lines are drawn for Punjab Assembly polls.

If one goes back six months to around July-August 2021, the assembly elections in Punjab appeared to be a settled affair. Parachuted from 10 Janpath, Navjot Singh Sidhu was to bide his time, be the loyal deputy to Captain Amarinder Singh, the sitting Chief Minister, looking to call his political retirement at a high after winning the elections in 2022.

Akalis were supposed to gain some lost ground from 2017, and the Aam Aadmi Party (AAP) was expected to make a lot of noise in return for a few scattered successes. It was a script convenient and realistic for all as the Bharatiya Janata Party (BJP) would again be denied any success in the state, fourth time in a row since Narendra Modi took over in Delhi in 2014.

And then followed a comedy of colossal errors that resulted in the state becoming more interesting than Uttar Pradesh with respect to elections.

The assembly election in Punjab, this time, is nothing like 2017. The AAP is no longer looking to be a second fiddle, but is a frontrunner with a revamped unit, even after their debacle and decimation on the ground in the national elections of 2019. Congress is no longer independent from the baggage of Congress’ first family, for now both its leaders, Sidhu and Charanjit Singh Channi, are political puppets in the hands of the Gandhi siblings.

Akalis can no longer utilise the credibility of the BJP in the Centre and instead have gone back to Bahujan Samaj Party (BSP), a party that did not have even one per cent of the vote share in most seats in 2017, and then, there is Captain Amarinder Singh, with an ego of a wounded lion, aiming to dent the Congress under Channi and AAP under Bhagwant Mann while allying with the breakaway faction of the Akalis and whatever is left of the BJP in the state after almost two years of the farmer protests.

Even with all the change in combinations, the situation on the ground continues to evolve. Captain, finally, as the representative of his alliance, has plunged into the political colosseum, elaborating on how Congress’ Sidhu is of an unstable mind and had the backing of the Pakistani lobby, and how Channi was often reported for misbehaving with senior government officials. While he opens the pandora’s box of Congress’ wrongdoings, his silence on those issues, some concerning national security, for the four years of his tenure, will also be under voter scrutiny.

The AAP, announcing Mann has their CM face, have rewarded their local hero and sole Lok Sabha parliamentarian, but have risked their fortunes, for winning Punjab will not be as simple as winning 1 of the 13 Lok Sabha constituencies in the state. Akalis and BSP are trying to woo the Jat Sikh and Dalit voters respectively, but face resistance from both AAP and Congress, further looking to erode their prospects. Congress, however, is holding its house of cards together given the erratic Sidhu may any day take down Channi, the party’s choice for the CM face, costing the votes of Dalit Sikhs and consequently, the entire election.

Thus, where does one look for answers in the four-way contest for a state this small yet so significant?

Firstly, each faction in the state, until 2017, had its loyal vote share. Even when they lost in 2002, the SAD-BJP faction had more votes (36.8 per cent) as compared to Captain’s Congress, the winner, with 35.8 per cent votes. In 2017, even when the SAD-BJP faction was routed after what many termed as 10 years of misrule, they had a vote share of over 30 per cent, more than that of the AAP that emerged as the principal opposition party in the state. Congress, losing elections in 2007 and 2012, had a vote share of 40.9 per cent and 40.1 per cent respectively, as compared to SAD-BJP’s 45.3 per cent and 41.9 per cent for the same elections.

Two, unlike other states in India, say Uttar Pradesh, Bihar, Gujarat, Karnataka, or Maharashtra, the caste barriers within the state are far more porous and fluid, and therefore, no party gets the overwhelming support from any single community.

Now, what would the Jat Sikh dynamics look like in 2022? The farmer protests would be weighing on the mind of the Jat Sikh voters, one, and two, a shift in the power centre in the state with Channi emerging as the first Dalit-Sikh CM could rattle many voters in this faction, pushing them towards the Akalis. However, can the Akalis recover the Jat Sikh voters they have lost to the AAP, or will the latter, as the current favourite to win the election, be the new political centre for this faction in the state? Also, there is the question of Jat Sikh voters wanting to align with the Captain faction.

Now, what would the Dalit Sikh dynamics look like in 2022? In Channi, Congress, after a spree of political miscalculations, have made a wise choice, for even in his brief tenure, the so-called scapegoat CM has managed to reach out to the Dalit Sikh voters, who were earlier voting on the basis of local loyalties, and consolidate his support. Akalis, never the first-favourites of Dalit Sikh voters anyway, would find their vote share further dented, but what the bigger worry would be in the AAP faction, who would not want to lose out on the Dalit Sikh vote bank after announcing Mann as their CM face.

The OBCs are a force to reckon with in the Malwa belt with 69 of the 117 seats, and for many parties willing to win in a contest as close as this, the OBC-Sikh vote would be important. While many may resonate with the Channi factor, it will all, eventually, boil down to the local arithmetic per seat, and how significant they are in a constituency.

Lastly, the Hindu voter, making up for 40 per cent of the state’s population. Ironically, even after the horrors of the 1980s and 1990s, and even the SAD-BJP alliance, the Hindu community has chosen to align with the Congress under Captain Amarinder Singh. A lot of it had to do with Captain’s strong stance against any separatist elements.

Now, after two years of farmer protests, and the whole realigning of political interests and Congress being accused of being in bed with some pro-separatist leaders, where would the Hindu vote swing?

The first assumption would be towards the BJP, but the party’s prospects, as of today, are battered in the state. Akalis, never a first-favourite of the Hindus, would find themselves further struggling for their vote after the exit of the BJP. The Hindu Dalit vote garnered due to the BSP voter is expected to be insignificant in the larger scheme of things. Congress under Channi may retain a significant vote share, but their success will largely depend on AAP’s failures, and how well they capture or do not capture the Hindu voter. Captain, BJP, and SAD(S) will get the Hindu votes, surely, but not good enough a number to translate into seats.

Pradeep Bhandari’s Jan Ki Baat, throws up some interesting findings from the ground. In a series of polls that Bhandari’s team conducted on the ground, a yearning for change amongst the voters was visible. This observation is without a doubt for even in 2019, the author, while on his tour in Punjab, learned that voters were miffed and exhausted with both the Akalis and Captain’s Congress, and wanted BJP to contest from more seats. For the voters, a change in the leadership was imperative as the state struggled with sluggish agricultural economy, stagnant growth in industry and other services. Today, the AAP seems to be filling that void.

But, where is AAP expected to gain from, especially when they were routed in 2019 in all Lok Sabha constituencies but one, that of Sangrur? Again, data from the same opinion polls by Bhandari offers clues to that. Firstly, AAP is expected to emerge as the biggest party in the Malwa belt, for no party can win Punjab without winning Malwa. Barring a few border constituencies, the party is expected to sweep the region, but more importantly, it may gain some ground in the Doaba and Majha regions as well. While AAP is not expected to clean-sweep the state with 70+ seats, it may just win enough to form the government.

There is another possibility on the cards too, that is that of AAP not reaching the magic number, for a lot many voters, because of caste or personality factor, may not resonate with Bhagwant Mann. There is also the question of infighting amongst the AAP with respect to ticket distribution, and as was the case in 2007, it could well be the AAP derailing the AAP, thus leaving the state with a hung assembly or giving Congress enough room to secure the magic number.

The third possibility, assuming a miracle of infinite proportions unfolds, is that of SAD, BSP, BJP, Captain’s PLC, and SAD(S) forming the government. This alliance of alliances would be driven by political motives alone, but would require Akalis to gain on the ground they lost in 2017, Captain’s PLC sweeping areas around Patiala, and the BJP being rescued by enough Hindu voters to give them a total of at least 15 seats alone in the state. Long-shot, but nevertheless, not theoretically implausible.

Lastly, the AAP and Congress under Channi coming together to form the government, assuming each party struggles to go beyond 40 or 45 seats. This would serve dual purposes.

One, for Congress, it solves the Sidhu conundrum, as by having Channi take over the post of the CM, they can discard Sidhu, as they discarded Captain and run the affairs from Delhi. For AAP, Mann as the deputy CM would solve Kejriwal’s conundrum of having an equal within the party and one with greater constitutional powers. A government remote controlled by the masters in the national capital, while taking care of the power equations within the respective parties, is not out of the question. Also, it is not like Kejriwal and Gandhis have not considered a coalition thus far.

Transcending all the caste equations, local poll arithmetic, personality battles, party dynamics, and the four-way contest on the ground, it is all going to boil down to this one question- is the yearning for change amongst the voters in the state greater in importance than the existing caste equations between Dalits and non-Dalits. If yes, AAP may have a second state to govern, or else, a hung assembly consequently translating into an alliance will be on the cards.

What’s worrying is that in the political scheme of things, before and after elections, the voters may be reduced to scapegoats at the cost of the state’s progress, development and security.