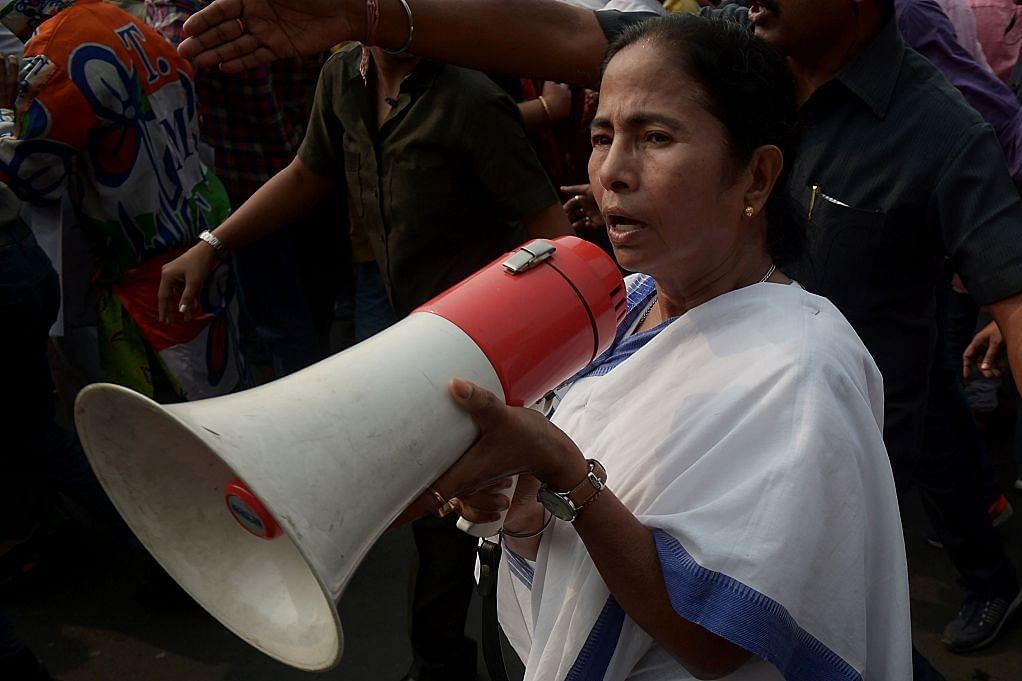 The list of candidates released by Trinamool Congress supremo Mamata Banerjee for the forthcoming Lok Sabha polls, reflects her alarm over the inroads made by the Bharatiya Janata Party (BJP) in Bengal. That is why she has, unlike in the past, relied more on political veterans rather than novices and film stars to take on the BJP.

The BJP has made considerable inroads in Bankura, Purulia, Midnapore, Bolpur, Jhargram, Cooch Behar, Jalpaiguri, Raiganj, Krishnagar and Ranaghat and many other places in the state. That is why she has done a complete U-turn on her favourite tactic of giving tickets to film stars, artistes and novices without any political base who will never pose any challenge to her or her anointed successor – her nephew Abhishek Banerjee.

Veteran Subrata Mukherjee, who was Mamata Banerjee’s mentor in the Congress and later joined her party, has thus been fielded from Bankura which was represented by yesteryear actor Moon Moon Sen in the last Lok Sabha. Mukherjee, the present panchayat and rural development minister, is one of the very few efficient performers in the state cabinet.

That Banerjee is willing to lose an efficient minister to counter the BJP speaks volumes about the political threat she faces from the saffron party. Moon Moon Sen has been packed off to Asansol, a seat now represented by the BJP’s Babul Supriyo. This move also indicates that Banerjee realises that Babul Supriyo cannot be defeated and, hence, she does not want to pit a serious candidate against him.

Veteran Congress legislator Manas Bhuniya, who defected to the Trinamool in 2016 and is the party’s Rajya Sabha MP now, has been fielded from Midnapore, another constituency where the BJP has gained strength. Yesteryear actor Sandhya Roy of the Trinamool had represented this seat in the last Lok Sabha. Banerjee was well aware that a lightweight like Roy would lose in Midnapore this time, and hence she has fielded a political veteran.

Mamata Banerjee has also sought to counter the BJP in Cooch Behar by replacing her incumbent MP Partha Pratim Roy with another political veteran and defector from the Forward Bloc, Paresh Chandra Adhikari. Adhikari was a three-time MLA from Mekliganj, which is part of the Cooch Behar Lok Sabha constituency, and a minister in the Left Front cabinet under Buddhadeb Bhattacharjee. Roy was facing anti-incumbency and had become unpopular with a section of local party leaders.

The BJP’s prospects in the Bolpur Lok Sabha seat are bright and realising this, Mamata Banerjee has fielded veteran legislator and defector from Congress, Asit Kumar Mal, from the seat. Mal, a five-time MLA from an assembly segment in the district, was the Congress chief whip before defecting to the Trinamool. Trinamool’s Anupam Hazra had won the Bolpur Lok Sabha seat last time, but joined the BJP recently. The Trinamool leadership had been very worried about the growing popularity of the BJP in the Adivasi inhabited areas of the western part of the state.

The BJP had performed well in the panchayat polls in that pocket last year and, since then, Mamata Banerjee has personally interacted with Adivasi leaders to woo them back. She has replaced her sitting MP from Jhargram, Uma Soren, with Birbaha Soren. Birbaha, though a newcomer to politics, is the niece of Nityanand Soren, chief of the influential tribal outfit Bharat Jakat Majhi Pargana Mahal. The name of Birbaha was suggested by this, and other tribal bodies. Mamata Banerjee sees a winner in Birbaha, but the BJP has the support of a large section of Adivasis.

Ranaghat is yet another constituency where the Trinamool faces a tough challenge from the BJP. The seat was won by Trinamool’s Tapas Mandal in 2014. But Mandal’s performance has been lacklustre and he has been facing strong anti-incumbency. Mamata Banerjee has, this time, chosen to field the young widow of Satyajit Biswas, the Trinamool MLA from an Assembly segment in this Lok Sabha seat. Satyajit was killed by some suspected Trinamool rivals earlier this year. Though his widow, Rupali, is a political greenhorn, Mamata Banerjee hopes that a sympathy wave in Rupali’s favour would stand her in good stead and see her through to the Lok Sabha.

Former matinee idol Tapas Pal, who was roped in to the Trinamool Congress by Mamata Banerjee a decade ago, has been representing neighbouring Krishnanagar Lok Sabha seat since 2009. But after he was accused and jailed for involvement in the Saradha scam and got embroiled in other controversies, the Trinamool supremo realised he would be easily defeated by the BJP which had become strong in the constituency. Pal has thus been replaced by Trinamool spokesperson Mahua Moitra, the party MLA from an Assembly segment in Nadia district. Krishnanagar falls within Nadia district. The Trinamool chief feels that Mahua Moitra, a former investment banker, will be strong enough to beat anti-incumbency and the BJP in Krishnanagar.

The Darjeeling seat, which was won by the BJP’s S S Ahluwalia last time, presented a challenge to the Trinamool. The Trinamool government was successful in brutally putting down the Gorkhaland movement two years ago and banishing the movement’s leadership, which was closely aligned to the BJP, from the hills. However, its proxies in the hills – the local leaders the Trinamool had propped up – do not have popular support. Mamata Banerjee thus chose a ‘son of the soil’, Amar Singh Rai, of the Gorkha Janmukti Morcha (the party which led the movement for a separate state) to contest the polls on a Trinamool ticket. Rai is the incumbent MLA from Darjeeling and had been in the forefront of the agitation, but then sided with the Morcha faction which was ‘won over’ by the Trinamool.

But the banished Morcha leaders are still very popular and Rai may not be able to counter their popularity, more so since he is contesting on a Trinamool ticket. The Gorkhas of the Darjeeling Hills have no love lost for the Trinamool.

The BJP has, over the past few years, emerged as a strong opposition to the Trinamool in Bishnupur, a sub-division in Bankura district. Trinamool’s Saumitra Khan had won this Lok Sabha seat in 2014, but he joined the BJP recently after a fallout with the Trinamool leadership. Mamata Banerjee has given the party ticket to Shyamal Santra, the sitting MLA of Kotulpur, an Assembly seat within Bishnupur. Santra is a known face in Bishnupur and is looked upon as one who gets things done. He is the junior panchayat and rural development minister and was performing well. That Mamata chose to sacrifice another efficient minister to counter the BJP is proof enough of how seriously she is taking the threat from the saffron party.

Mamata Banerjee has admitted that the polls this time pose a “tough challenge” to her party. “She knows that winning the maximum number of (Lok Sabha) seats this time from Bengal is crucial for her. The best case scenario for her is a hung verdict with no party being able to muster a majority.

The Trinamool supremo, thus, has left no stone unturned and is not only taking the BJP challenge head-on, but is determined to wipe out the last vestiges of the Congress and the Left from the state. She has engineered defections of MPs, MLAs and many senior leaders from the Congress over the years. But what is new is that, this time, she has fielded them and not her own party’s aspirants. Thus, Kania Lal Agarwal, the Congress MLA from Islampur who defected to the Trinamool, is being fielded from Raiganj, which was bagged by CPM’s Mohammad Salim in 2014. Agarwal is a known face in those parts.

He is being fielded from Murshidabad which was won by the CPM last time. The Trinamool has nominated beedi baron Khalilur Rehman from the Jangipur seat which was won by Congress’ Abhijeet Mukherjee (son of former president Pranab Mukherjee) in 2014. Rehman is well-regarded for his philanthropic activities and has a good chance of wresting the seat from the Congress.

The only two indulgences Mamata Banerjee allowed herself this time were Bengali actors Nusrat Jahan and Mimi Chakraborty. A mere two faces from the Bengali film industry being fielded this time is in stark contrast to the past when the Trinamool chief would give party tickets to many more actors.

“Apart from the personal popularity of the actors, she knew people would vote for them because they were her (Mamata Banerjee’s) nominees. And it was a zero-risk game too: their wins would be attributed to Mamata Banerjee while any loss would be blamed on the actors themselves.

Also, such lightweights and political novices without any support base of their own would never pose a challenge to the Trinamool chief or her nephew. But this time, Mamata Banerjee has not taken any chances. Nusrat and Mimi have also been fielded from safe seats,” said commentator Chakraborty. Mamata Banerjee has also steered clear of giving tickets to her ‘civil society’ brigade – academics, former bureaucrats, litterateurs, painters, stage artistes etc, as she had done in the past.

But the nominations of the two actors have become a subject of a lot of humour – often black – on social media. Also, Nusrat Jahan’s past has now returned to haunt her. She had allegedly spent time and sheltered the prime accused in the Park Street rape case and questions are once again being asked about why the Kolkata Police did not name her in the charge-sheet (read this) for sheltering the prime accused.

Another Trinamool candidate, Afrin Ali (nee Aparupa Poddar) is also embroiled in two serious controversies. She is an accused in the Narada sting operation and is facing charges of illegally claiming to be a Scheduled Caste even after her conversion to Islam to marry one Shakir Ali. Afrin contested and won from Arambagh constituency on a Trinamool ticket in 2014 and has been fielded again. Arambagh is a reserved constituency (for Scheduled Caste candidates) and Afrin Ali claims that though she has changed her name after marriage, she never converted to Islam. This case, like the Narada sting operation case, is pending before the Calcutta High Court.

The bottom line, however, is that Mamata Banerjee’s choice of candidates this time displays the seriousness with which she perceives the serious threat she faces from the BJP. And also her desperation to win the maximum number of seats from the state to further her national ambitions.