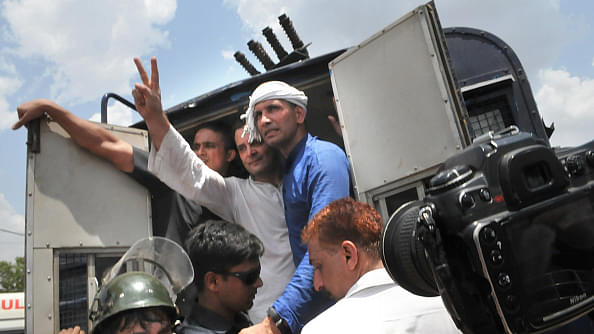 Congress vice-president Rahul Gandhi was detained on his way to Mandsaur on Thursday. He was released in the evening. (Mujeeb Faruqui/Hindustan Times via Getty Images)

The agrarian protest in Madhya Pradesh took a political turn on Thursday with Union Home Minister Rajnath Singh hinting at the involvement of “anti-social elements” in causing violence in Mandsaur and the detention and release of Congress vice-president Rahul Gandhi.

Madhya Pradesh Home Minister Bhupendra Singh accused the Congress of “inciting farmers” and argued that there was no farmers’ agitation anywhere in Madhya Pradesh”. The Shivraj Singh Chouhan-led Bharatiya Janata Party government in Madhya Pradesh, which prides itself on 20 per cent growth in the agriculture sector, smells a “political conspiracy to mislead farmers” ahead of the next assembly elections in late 2018.

Farmers in western Madhya Pradesh have been on protest since 1 June 2017 demanding a loan waiver and better prices for their produce. The protest turned violent on Tuesday after farmers torched vehicles and shops, blocked roads, and pelted the police with stones. Five people died in the firing.

Early in the afternoon Gandhi made an unsuccessful bid to enter the besieged Mandsaur district, the nucleus of farm unrest. He was stopped by Madhya Pradesh police and taken into custody along with other senior Congress leaders at Nayagaon in Neemach district, some 70km from Mandsaur.

Gandhi and other leaders were released later in the evening. He met the kin of those farmers who died in the firing in Dinva village of Neemach district and told them that he would raise the issue during the monsoon session of Parliament, according to local news channels.

In Mumbai, Home Minister Rajnath Singh said at a press conference that “he had complete information that anti-social elements were fanning violence in Madhya Pradesh” and added that the Madhya Pradesh government had already ordered a judicial probe. “Let’s await the findings of this probe,” he added when asked about the Madhya Pradesh BJP’s allegation that Congress was behind the violence.

Meanwhile, farmer organisations in the state rejected the relief measures announced by the Chief Minister on Wednesday, including assured procurement of pulses and onions at support prices and the creation of a state agricultural costs and marketing commission to determine remunerative prices.

“There is hardly any moong (green gram) or arhar (pigeon pea) left with the farmer to sell and this move will only benefit traders who has already purchased from farmers at lower than support prices,” said Kedar Sirohi of the Aam Kisan Union from Indore. “What will happen for (perishable) produce like vegetables and milk for which the prices are not remunerative?” he asked.

Shiv Kumar Sharma, convener of the Rashtriya Kisan Majdoor Sangh said the primary demand of farmer organisations is a waiver of loans. “The Chief Minister has not said a word on debt relief. Besides, what will a state commission on agricultural costs do when support prices are announced by the Centre?” He added that around 62 farmer organisations from various states would meet in Delhi on Saturday to decide the future course of action.

On Thursday the Bharatiya Kisan Union, which has a presence in Haryana, Punjab and Uttar Pradesh, asked the Madhya Pradesh government to release its state secretary Anil Yadav who was arrested earlier this week. “We request the Prime Minister to implement the Swaminathan Commission’s recommendation of fixing support prices at costs plus 50 per cent. If the government does not take immediate steps we will be forced to announce an indefinite strike in northern states,” the organisation said in a statement.

This piece was first published on The Live Mint and has been republished here with permission.