Madhya Pradesh: Why #BetiKaDushmanKamalNath Trended on Twitter And Why BJP Made A Video On It 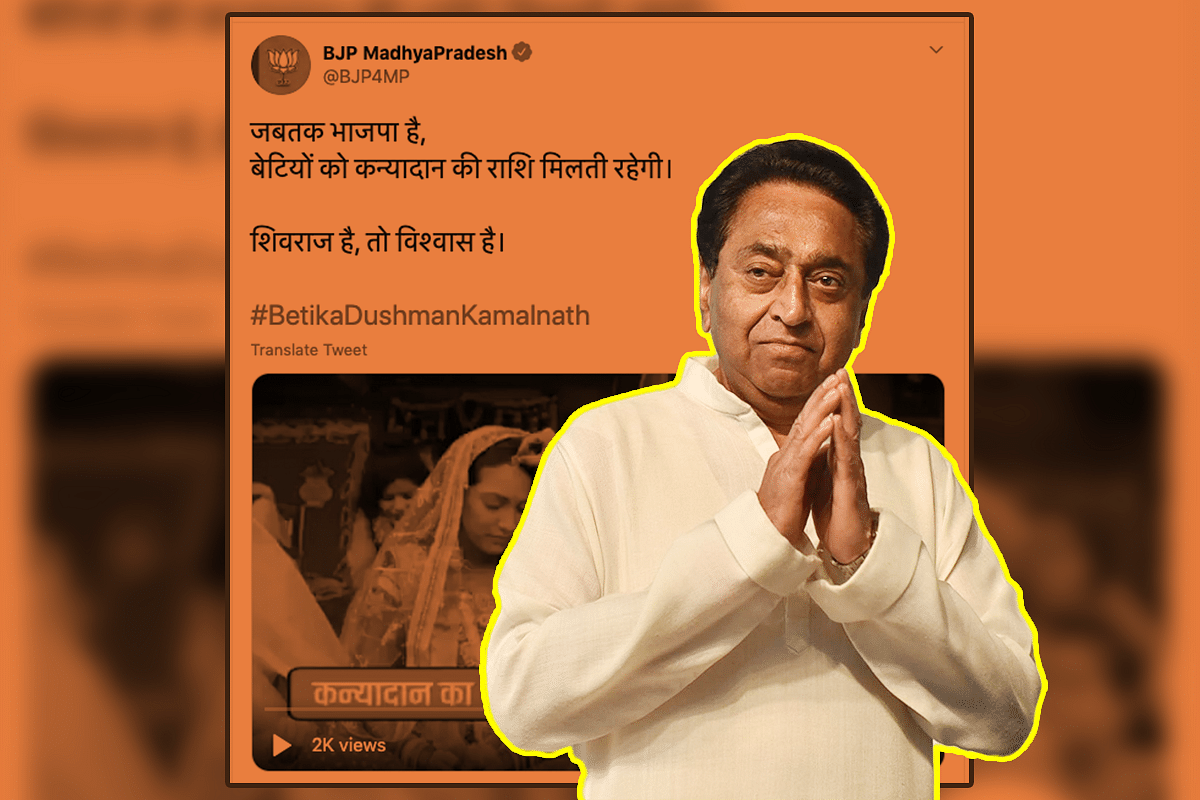 Congress leader Kamal Nath made an objectionable remark against Bharatiya Janata Party (BJP) leader and Madhya Pradesh minister Imarti Devi at an election campaign meeting in Madhya Pradesh last week. The remarks have led to strong criticisms of Kamal Nath and the Congress.

The remarks from Kamal Nath came while he was campaigning for a Congress candidate for the bypolls in Dabra. He said that his party candidate was a “simple person” unlike the opponent (from BJP) who is an “item”, referring to Devi.

“Why should I take the name (of the opposing candidate)? You all know that person better than me. What an item,” he said. The crowd shouted “Imarti Devi”.

With criticism and outrage surrounding Kamal Nath's remark, Madhya Pradesh BJP has upped its attacks on the veteran Congress leader. There is an issue within the larger issue here that MP BJP is using to corner Nath.
The larger issue that the BJP is taking up is the dignity of women and the daughters. "Beti".

The bypoll is round the corner and the BJP is making all efforts to strike and dent Congress in the wake of the controversy that involves caste and gender identities of Imarti Devi.

However, it's the stand of Nath on the Kanyadan Yojana that is being used by BJP to further build the mood against him.

The scheme was introduced during Shivraj Singh Chouhan's previous term. It used to offer Rs 28,000 to the couples to get married. When Nath came to power, he raised the financial aid to Rs 51,000. With Chouhan returning to power once again, the MP government decided to reduce the amount.

In August, the issue got politicised.

Social Justice Prem Singh Patel said that Nath had raised the amount after coming to power to get votes.

"We are considering reducing the amount being given under Kanyadan Yojana from Rs 51,000, as it is more than enough," Patel was quoted saying in this report.

He added, "Former Chief Minister Kamal Nath raised the amount to get votes. People are still struggling to get that money," he added.

The BJP has made a video praising Shivraj Singh Chouhan, who happens to be Nath's predecessor, and is fondly addressed as "Mamaji" (maternal uncle) in the state.

With the Kanyadan Yojana in focus, it draws a contrast between 15 years of Chouhan's work on protecting the dignity of women and the alleged "undoing" of the 15 months of Nath's rule.

BJP is using the moment to highlight the achievements of Chouhan in providing support to the daughters of the state -- with the Kanyadan Yojana.

The video also attempts to state clearly that Kamal Nath made promises he could not keep. The narrator in the video raises a question: the Mama (maternal uncle) who has treated the daughters of the state as Laxmi (goddess), how can he step away from kanyadan?

A new hashtag emerged on Twitter attacking Kamal Nath. The hashtag #BetikaDushmanKamalNath (the enemy of daughters) was used by the BJP to post the above video.

The video says that the promise was made and then they got rid of the responsibility: "Ikyaavan hazaar (Rs 51,000) ka vaada kiya aur fir palla jhaad liya".

In the backdrop is the issue of Nath's remark on Imarti Devi. She is a cabinet minister in Shivraj Singh Chouhan government in Madhya Pradesh. She is contesting the by-poll from BJP in Dabra.

Rekha Sharma, of the National Commission for Women (NCW), said in a post on Twitter that she is sending a notice to Kamal Nath and will be writing to the Election Commission of India (ECI).

In her attacks on Kamal Nath, Imarti Devi has referred to her caste.

She said, “What's my fault if I was born in a poor family? What is my fault if I belong to the Dalit community? Such people (former CM Kamal Nath) have no right to stay in Madhya Pradesh...I demand Congress president Sonia Gandhi to remove him from the party. She is also a woman and a mother, will she tolerate if anybody will say something like this about her daughter?"