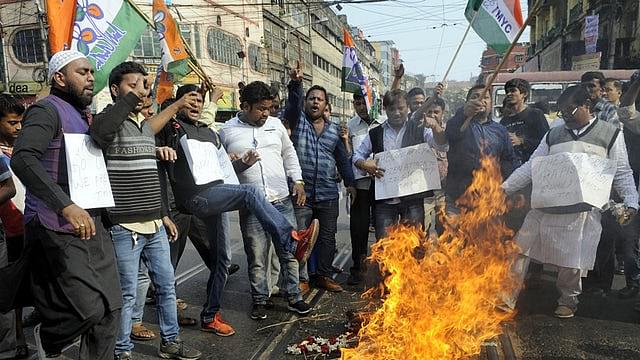 The Muslim-led communal conflagration in West Bengal’s North 24 Parganas district over an allegedly provocative Facebook post by a Class XI student – who has since been arrested – needs to be put down with an iron hand. It is not possible for Mamata Banerjee to establish any degree of credibility on law and order if she cannot rein in elements of the Muslim community who have decided they will react violently to any real or imagined slight to their religious sensibilities.

If self-styled gau rakshaks have been held to account and lambasted in the media for unleashing violence in defence of so-called Hindu sentiments, it is equally important in a secular country to ensure that violence is not the standard response to instances of provocation of the minority community. India’s Left-Secular intelligentsia has been claiming that free speech in under threat in India; this is the right occasion for them to prove that they truly worry about free speech. If a Facebook post, apparently sourced from information freely available all over the internet, can be deemed provocative enough to call for violence, one cannot imagine a more chilling impact on free speech.

The reality is that parts of West Bengal are rapidly being taken over by radical Islamists – including those feeling the heat in Sheikh Hasina’s Bangladesh – and Banerjee’s administration has not been able to quell this upsurge, and the resultant Hindu backlash.

In fact, the state appears to be duly “dhimmified”, intimidated enough to withdraw into a shell whenever radical Islamists threaten mayhem or resort to violence.

In January 2016, when a Muslim mob torched a police station in Kaliachak, Malda, the repair work was started almost immediately, and repainting was done in a couple of days, as if nothing happened. Most of the policemen posted at Kaliachak were shunted out, so that the truth about the mob attack is not allowed to spread easily.

The Kaliachak incident was the result of a mob protest against an alleged defamatory remark about the prophet by one Vishwa Hindu Parishad functionary, Kamlesh Tiwari. While hate speech is condemnable, the line separating hate speech from free speech is a thin one.

Last December, communal mobs went violent in Dhulagarh, Howrah district, but the local media was surprisingly silent and restrained in reporting the incidents that destroyed many Hindu homes and shops. The local media woke up only when one national news channel decided to focus on the riots, which forced the other channels to follow suit, ending the self-imposed censorship of the local media.

Banerjee’s minority-based politics is fuelling a communal backlash and mob violence which a national media obsessed with cow vigilantism seems unable to fathom.

The Chief Minister, meanwhile, is playing victim, claiming that the Governor talked to her insultingly on the Baduria violence. She also alleged a conspiracy by the Centre: “The ruling party at the Centre has an agenda. They have formed a 'Gau Raksha group' to kill people. A 'hate group' was formed to foment riots. Riots are taking place in the name of Hindu Samhati.”

Her response to these violent incidents is troubling. She in quoted by the Hindustan Times as telling her policemen to give anyone who foments communal trouble “a sound thrashing.”

Is this the way to enforce law and order? What then separates the police from the mob?