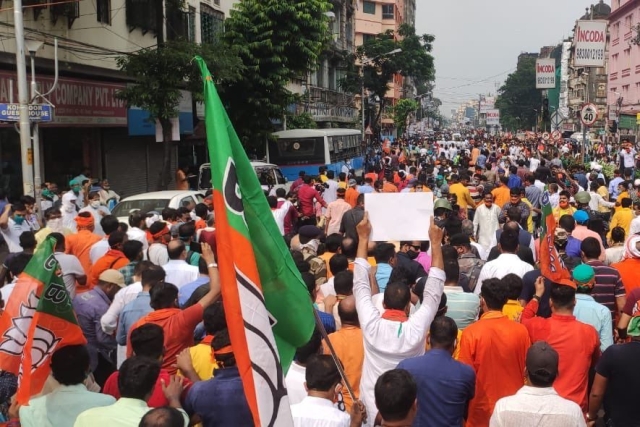 History appears to be repeating itself in Bengal. And Bengal chief minister Mamata Banerjee does not seem to have learnt any lessons from it.

In the beginning of the last decade, when the Trinamool was rapidly gaining ground in the state, the ruling Left Front government under Buddhadeb Bhattacharjee had tried to thwart the Trinamool’s rise through brute state power.

Trinamool protests and marches on a plethora of issues highlighting Left misrule used to be met with harsh police action. CPI(M) cadres used to attack Trinamool workers and supporters, especially in the rural and semi-urban areas.

Many Trinamool functionaries and supporters were killed or driven out of their homes. False cases were lodged against thousands of Trinamool activists. But Mamata Banerjee soldiered on, and the rest is history.

At that time, the Left had forgotten how it had to bear the brute force of the state machinery under Congress regimes from the early 1970s.

Under the Congress chief minister Siddhartha Shankar Ray, the state police turned into a private army of the ruling party and unleashed savagery on Left activists.

All that, however, could not thwart the CPI(M)-led Left Front from coming to power in Bengal in 1977. The Congress was relegated to the sidelines and reduced itself to a marginal player, and this helped the Left stay in power for 34 years.

Thus, when Buddhadeb Bhattacharjee set his police and party cadres on the Trinamool, he was forgetting the lessons that history threw up in the early and mid-1970s.

Mamata Banerjee, too, has forgotten the lessons thrown up a little over a decade ago. The ‘lesson’: that the rise of a party cannot be thwarted by deploying the state administration or use of muscle power.

Thursday’s massive protests by the BJP, in which police hurled smoke bombs and teargas on protestors, lathi-charged them brutally and drenched them with blue coloured water, was thus a throwback to the tumultuous days of the last leg of Left rule in Bengal.

Mamata Banerjee, in fact, may have conceded defeat even before the protests began. By shutting down Nabanna (as she has named the state secretariat) for two days (Thursday and Friday) on the specious plea of sanitising it--an explanation that has no takers--the Trinamool chief appeared to be running scared.

The state administration blocked all roads and highways leading to Kolkata and even created massive traffic snarls at toll booths on these highways to prevent vehicles loaded with BJP workers and supporters from reaching Kolkata. Cops attacked buses carrying BJP workers (see this and this).

To prevent BJP supporters from the districts neighbouring Kolkata from entering the city on Thursday, local police and Trinamool cadres allegedly conducted massive manhunts and warned BJP activists from venturing out.

Owners of buses and trucks were warned against hiring out their vehicles to transport BJP activists to Kolkata. Barricades were put up outside villages and small towns to prevent BJP activists and supporters from venturing out of their respective areas.

But all those measures could not prevent BJP activists from congregating in Kolkata and across the Hooghly river in Howrah (where Nabanna is located) to participate in the rally.

“Our men and women got down from their vehicles that were stuck in massive jams and walked long distances to participate in the protest rallies. Many got on boats and ferries to enter Kolkata (watch this),” said state BJP chief Dilip Ghosh.

The brutal police lathicharge (see this and this) on BJP activists and even leaders like national secretary Arvind Menon and state vice president Raju Banerjee portrayed the state administration in poor light.

Trinamool cadres and even policemen allegedly hurled bricks, stones and country made bombs at BJP protestors and processions (see this, this and this)

Allegations that the water from water cannons used by the police was laced with chemicals flew thick and fast. And the fact that the water was dyed blue--Mamata Banerjee’s chosen colour with which all government buildings and structures have been smeared--generated considerable criticism.

When Bharatiya Janata Yuva Morcha national president Tejasvi Surya, who has been smartly drafted in by the BJP to participate in the protests (read this), went to a police station in Kolkata late Thursday evening to lodge an FIR against police atrocities, he was kept waiting for hours and ultimately heckled (see this).

An incensed Surya, who was accompanied by two other Lok Sabha MPs, declared all the three parliamentarians would file breach of privilege motions (see this) against the erring police officers, a threat that they seem determined to follow through.

BJP state chief Ghosh claimed that had the police not imposed restrictions or tried to stop party workers and supporters from coming to Kolkata and Howrah, the number of protestors would have numbered at least five lakh.

But the BJP, after a stock-taking exercise late on Thursday, appeared satisfied. “The Trinamool is rattled and that is why it used the state administration to counter our protest. The more they try to repress us, the more our workers and supporters will be enthused,” asserted BJP state general secretary Sayantan Basu.

The BJP says that the bugle for ‘Battlefield Bengal 2021’ has already been sounded, and Trinamool is running scared.

Deploying brute power and using the police and musclemen to curb the BJP shows the Trinamool is scared, says BJP’s Ghosh.

“But repressive measures cannot stop us. Mamata Banerjee should know that,” Ghosh added.

The stormy scenes that unfolded on the streets of Kolkata and adjoining Howrah on Thursday were reminiscent of similar ones more than ten years ago.

At that time, it was Trinamool that was out on the streets and the police were acting as an auxiliary force of the CPI(M).

The Trinamool came to power in 2011, but seems to have forgotten the preceding years when it had to face police lathis that would have only strengthened its resolve to unseat the Left from power.