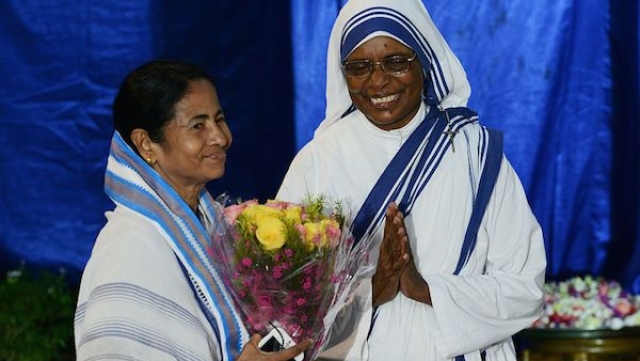 Life, and the world, is full of ironies. And West Bengal Chief Minister Mamata Banerjee will play one out over the next few days.

Banerjee has travelled to Rome to witness the elaborate charade of Mother Teresa being formally anointed a Saint by the Pope on the basis of a fantastical and dubious miracle attributed to the Albanian nun on Sunday (4 September). Next on her agenda are meetings with business and industry leaders in Rome and Munich, ostensibly to scout for investments in Bengal.

Mother Teresa, who made Kolkata her home, is closely associated with all that was, and is, wrong with this city. To the West, Mother Teresa is synonymous with Kolkata with its destitute and dying, its lepers, its hungry masses, its filth and decay. It is a different matter that the Kolkata of those decades is far removed from the Kolkata of today. But, then, perceptions are hard to dissipate.

More so since the Western world would like to continue to believe in the image of Kolkata that Mother Teresa represented and also actively portrayed to the world: a city full of disease-causing garbage, pestilence, wretchedness, despondency and suffering. And then comes a white-skinned angel, a Catholic to boot, who delivers the suffering masses of Kolkata from their collective evil and provides them the much-needed Christian succor from their heathen lives.

Mother Teresa cleanses the immoral, guilt-filled conscience of the Western world like none else does. It is important for the Western Christian world to celebrate her life in Kolkata. It is important for the Western world to donate generously to the Missionaries of Charity (which spends only a fraction of that in its “noble” mission of providing succor to the poor and ailing and allegedly parks the rest in the Vatican Bank) in the fond belief that after all their immoral deeds around the world, their tortured souls will find salvation through the “good” deeds of the evangelical nuns in blue-bordered white sarees.

On Sunday, as Mamata Banerjee and others watch the farcical pageant at the Vatican, the image of Kolkata as a hell-hole will once again be reinforced in the eyes of the world. Unwittingly, perhaps, but the visions of Kolkata (and, by extension, Bengal) that the Western world will conjure will be that of filth, squalor, hunger and disease— a city of the poor that is in a slow slide towards terminal decline.

Mamata Banerjee herself will be buttressing that image with her crumpled cotton saree (white and blue-bordered, in a show of misplaced solidarity with Mother), bathroom slippers and the unkempt look she so assiduously cultivates. And the world also remembers her for her singular contribution of driving the Tata car project, which could have provided jobs and reversed Bengal’s economic and industrial decline, out of Bengal. Her mercurial image and whimsical character only add to the heavy cross that she bears around her neck.

After having witnessed the celebration of Mother Teresa’s life as the “Saint of (Kolkata’s) gutters” and as a white Catholic nun who shouldered the “burden” of providing succor to Kolkata’s miserable masses, Mamata Banerjee will embark on the tough, if not impossible, task she has arrogated to herself. Convincing the rich, fat dons of Italy’s Chambers of Commerce and Industry that the Kolkata they associate with Mother Teresa is not the Kolkata she (Mamata) presides over will be quite an unyielding exercise for her.

When she walks into the thickly carpeted, ornate and gilded chambers of five star hotels in Rome and Munich where she will meet the dons, Mamata Banerjee will be clad in the same attire— crumpled cotton saree, bathroom slippers and that unkempt look. And she will, instantly, conjure up images of Mother Teresa in the minds of her audience who she wants to invest in Bengal.

The fat cats of Rome and Munich would have readily loosened their purse strings at Mother Teresa’s behest to donate to her order and do so today also in the Mother’s name. But putting their good money to expect handsome returns from Mamata’s Bengal? That will take them some convincing; unfortunately for Bengal, Mamata Banerjee is not the best-suited to do that. Donations and investments are, after all, two very different propositions and captains of industry and commerce know this only too well.

Mamata Banerjee, thus, ought to have delinked her “pilgrimage” to the Vatican from her business trips to Rome and Munich. And, for good effect, she would have done well to dress and behave like a Chief Minister seeking investments and pitching her state as a prime investment destination rather than dress and behave like one seeking donations.

Falsehoods & Fairy Tales: Whatever It Takes To Make A Saint Out Of Mother Teresa