Maratha, Jat Quotas & More: Why Jugaad Solutions Will Not Work Any More 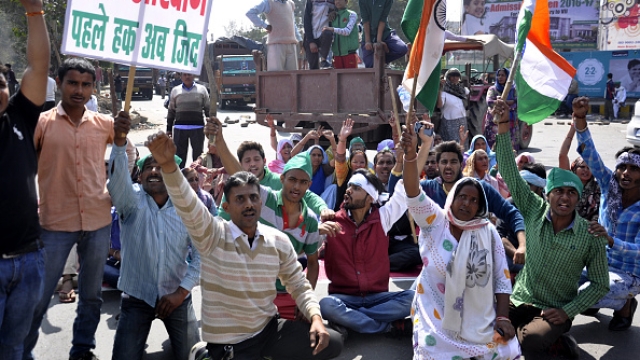 Jats protesting for their demands for reservation (Getty Images)

In the past couple of months, Maharashtra has witnessed a series of silent protests from the Maratha community. In various parts of the state, lakhs of Marathas have participated in these marches. The trigger for this outpouring of anger on the streets was the rape and murder of a 14-year-old Maratha girl in Kopardi village of Ahmednagar district in July this year. While observers debate whether these protests are spontaneous or a calculated political move to consolidate the community, one thing is certain: the patchwork solutions employed by politicians since independence to avoid tripping over India’s caste fault lines are not working.

Patchwork solutions, or jugaad, abound in every aspect of governance in India. Politicians have, for far too long, carefully avoided working on concrete solutions to real problems facing the country. The most common resort to any crisis is to come up with a law (or an institution). After some time, that law (or institution) in itself becomes a bigger problem than the one it was introduced to solve.

The Cauvery issue is a case in point. The Supreme Court thinks it can pass an order and solve the crisis. Instead of focusing on incentivising people to change crop patterns and water management, it resorts to judicial jugaad.

Our education system is in tatters, and there is a serious lack of capacity. Our solution? Pass a sectarian law which discriminates against the majority community and pushes it out of the education sector, bringing down the capacity even further.

Women’s security is a critical issue today. But what did we do after Nirbhaya’s rape and murder? Instead of working on ways to change attitudes at the societal level, we conveniently passed a draconian law that in itself has become a problem now.

Take the case of the Scheduled Caste and Scheduled Tribe Prevention of Atrocities Act. It was recently amended by the National Democratic Alliance government, making its provisions more stringent. The list of offences punishable under the act has been updated to prevent atrocities such as:

Though there is no doubt that SCs and STs are victims of these atrocities in disproportionate numbers, a state based on the ‘rule of law’ would not make an exception based on the victim’s caste. Isn’t it also an atrocity if a non-SC/ST woman’s clothing were removed? If it is, shouldn’t she be getting a compensation at par with that of an SC/ST woman?

One of the demands of the Marathas is that the misuse of this act should be stopped. The three suspects arrested for rape and murder belong to a Dalit caste. So here, the victim won’t be eligible for the same compensation as that for a Dalit. A new offence added in the act makes it punishable to ‘defile objects sacred to SC/ST members’. It is so broad that the Marathas are not even criticising the act openly for fear of being prosecuted. After all, the act in itself may be interpreted as a “sacred object.”

The Marathas are also demanding reservation in government jobs. They are not wrong in making this demand. The existing reservation system barely reflects the realities of 2016 and is a perfect example of the patchwork solutions that the politicians have employed instead of working on how to get more and more people off reservation.

Now, the judiciary is not letting politicians indulge in jugaad any more insofar as the quota system is concerned. Just in the last couple of years, the courts have stuck down attempts to give reservation to the Jats and the Marathas. The Gujarat government had also tried to placate the Patels by setting aside 10 percent quota for general candidates, but this too was termed unconstitutional by the judiciary.

If it was up to the politicians, there wouldn’t be any resentment among the Jats, Marathas and Patels, as they would’ve been placated through jugaad. While the judicial activism is welcome in this regard, it is too little and too late. It also reeks of hypocrisy and incompetence. Tamil Nadu has 69 percent reservation. This came into being even before the Mandal commission judgment was announced. Now, the courts won’t allow anyone to breach the 49 per cent quota limit. When the previous United Progressive Alliance government extended 16 percent reservation to the Marathas and 5 percent to the Muslims in Maharashtra, the Bombay High Court overruled this decision, saying this took the total reservation to 73 percent – beyond the Supreme Court’s stipulated 50 percent limit. But what is ironical is that Maharashtra already has crossed that limit. It has 52 percent reservation at present. What it conveys is that you can cross the 50 percent limit but not by much. This is a mockery of the Supreme Court’s own judgment.

Judicial activism is only adding fuel to the fire. The courts’ verdicts reflect more activism and less justice. For instance, the Supreme Court has admitted that on the composite economic scale, the score of Jats is 16.55, lower than that of Gujjars (19.38) and marginally higher than that of Ahirs (14.86) in Delhi. Despite this, the Supreme Court Bench ruled against the inclusion of Jats in the Other Backward Class (OBC) category.

Reality Check India (a twitter pseudonym) describes the situation thus: “It is clear that the Jats are being asked to come through a very highly fortified front door while there are others who are inside on much looser criteria through the back door.” He writes:

The biggest problem is that those who are already inside did not go through the same process of measurement that the outsiders are being subject to. This is a gigantic anomaly that can’t be brushed aside.

Jat Quota Stir: The Real Issue Is That Of The Equality And The Equal Protection Of The Laws

Then, there is the issue of the relevance of the quota system as we know it. It may have been relevant earlier, but it doesn’t reflect the realities of 2016.

After the introduction of land reform laws post-independence, the majority of land holdings were transferred from landlords to tillers. This greatly helped agrarian castes like Jats and Marathas. The green revolution further empowered them. However, the situation has changed today. For instance, the average size of an individual holding in Haryana has fallen from 3.77 hectares in 1970-71 to 2.55 hectares in 2010-11. In Maharashtra, the same has reduced from 4.28 hectares to 1.45 hectares in the same time period.

A handful of farmers in and around the National Capital Region have made fortunes selling their land. They have Fortuners and Pajeros to flaunt, as the twitter jokes go, but the rest are scraping the bottom of the barrel.

In Maharashtra, 80 percent of Marathas are still employed in agriculture (compared to India’s average of 55 percent). This Mint report quotes a Maratha social activist Kishore Shitole as saying, “Barely 2-5 percent of the Marathas are rich and politically powerful. The rest are poor, dependent on others, and unsure of their social and economic future.”

Apart from the decreasing size of the average land holding, other reasons for the rising demand for reservation among agrarian castes include falling agricultural incomes. Government jobs pay more and provide job security. There is competition in the marriage market due to the skewed sex ratio, particularly in the case of Haryana and Jats; so grooms with stable, government jobs are preferred. Failure of successful governments to move people away from agriculture and farming lies at the core of the problem.

This could’ve been avoided if we had taken manufacturing more seriously as a job creator rather than stifling the sector with the licence-permit-quota raj. We are now trying to catch up with the rest of the world through ‘Make in India’, but opposition party politicians are found mocking the initiative. India’s biggest enemy remains India itself.

The Mint reports today (12 October) that Maharashtra’s OBCs and Dalits are consolidating in the face of unprecedented mobilisation by the Marathas. They are opposing Maratha efforts to dilute the SC and ST Atrocities Act and don’t want them to be included in the OBC list either.

Earlier this year, the Jat quota stir had also turned into a caste war as Dalits and OBCs who risked losing their share of the reservation pie reacted strongly to Jats’ demand for reservation. The saving grace in Maharashtra is that both Marathas and OBCs/Dalits are resorting to peaceful methods of protest. But for how long?

As this Swarajya column contends, Indian society is in undergoing a churn and needs leadership of the highest quality at every level. Sooner or later, we are going to have to face these and other problems head on.

Look at the Economy. Modi government has not taken any short cuts. It is ushering in deep institutional reforms. We now have a monetary policy framework in place. The NK Singh committee will soon submit its recommendations on a new fiscal law. The Goods and Services Tax (GST) Council will now decide your taxes instead of one person. The enactment of the Insolvency and Bankruptcy Code will place India ahead of most of the developed economies in insolvency rankings. We now have a Bank Boards Bureau in place to keep a tab on the indiscretions of the public sector banks and improve their governance.

These are structural reforms aimed at curing what ails Indian economy in the long term. No quick fixes. PM Modi needs to extrapolate this thinking to other aspects of governance and society too. It’s time we fixed our problems and completed the hard task of nation building.