Media Bias In Bengal Polls: The Story Of A (Tele)Graph That Keeps Falling 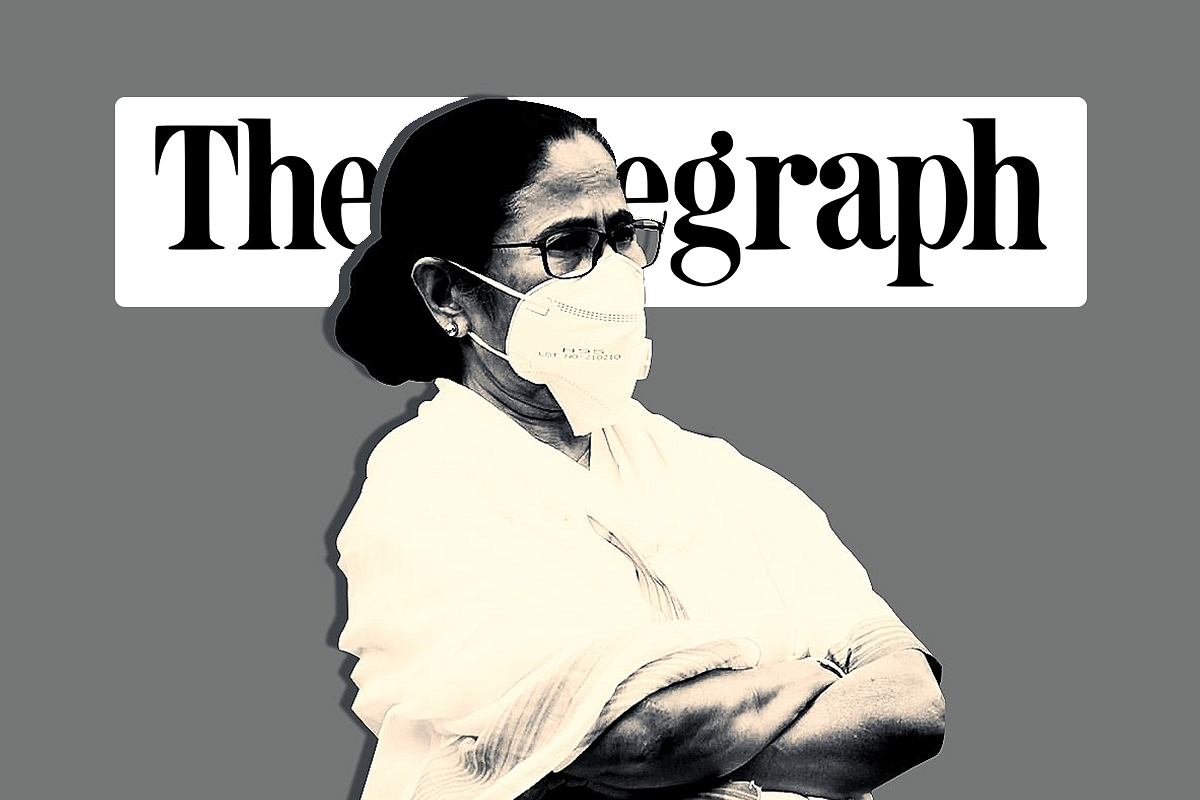 "Something's not adding up here!"

An accountant's mind from the very start is tuned to find patterns, look out for errors and identify discrepancies, almost as if seeking them. Even if everything does add up, or seemingly appears to, one cannot simply rule out the possibility that things might actually be out of balance.

In this era of machine-driven accuracy and precision, the task of an accountant is truly admirable. An accountant by his self helps make sense of a gamut of information, identifies and reports laxities and finally motivates decisions of stakeholders.

Some may comment that media’s role is akin to that of an accountant in a democracy.

If something does not add up, there's almost always a reasonable explanation behind it — it can be either of the two — an error or a calculated error. However, the world around us is more complex than a simple P&L sheet.

News coverage, more so skewed news coverage, has the potential to shape opinions, reactions, perceptions, as well as poll-behaviour. ‘Balanced reporting’ is as much as expected of a journalist, as that of an accountant.

But clearly, such reporting is a rare commodity. Recently, a technical director with CNN was found boasting that they deliberately overstated concerns on Donald Trump’s health while showing Joe Biden as some sort of healthy, vigorous ‘young geriatric’. He also admitted that they ran pro-Biden propaganda to get Trump voted out.

If journalists or the media want to do political activism or politics, why not come out in the open and put their ideas to the democratic test? Why hide behind the facade of journalism to package their politics? Pushing propaganda while claiming to be doing journalism is just intellectual dishonesty and moral corruption.

A case in point in India is a certain newspaper, often cheered-on after by the who’s who of the Indian political and media sphere for its cheeky headlines, overused puns, vitriolic opinion pieces and palpable political leanings – some may say there’s more to The Telegraph than that. We’ll find out.

Window dressing is a device often employed by an accountant to present the books in a way as desired by the owners. However, window dressing in this particular newspaper’s case is more than just plain manipulation to show things in a favourable light. When it comes to The Telegraph, it is complete smoke and mirrors.

Here’s the front page of The Telegraph calling out, nay, almost screaming out at Prime Minister Narendra Modi for using the words ‘Didi O Didi’ while referring to Chief Minister of West Bengal, Mamata Banerjee. The article goes on to compare his words with the timeless Bollywood dialogue ‘Pushpa O Pushpa’ along with the ‘Laila O Laila’ a Bollywood item number. The newspaper also goes on to liken the country’s Prime Minister with a ‘Paara Chengra’ and a ‘comment mara’ boy of the neighbourhood.

If denigration didn’t achieve enough, note the headline placed right beside it. It conveniently happens to be on alleged charges of sexual harassment on a poll observer visiting from Uttar Pradesh and sharing the PM’s namesake ‘Narendra’.

Furthermore, at the top one can find a cleverly placed feature on the topic ‘ripped jeans’, a piece attacking BJP Chief Minister of Uttarakhand Tirath Singh Rawat.

The semantics are not lost on one.

Moving on. Assuming one progresses from the left to the right, the article to the left first reads how money is being seized by the Election Commission near the airport, and right next to it we have a huge headline proclaiming how BJP leaders are driving the most air traffic in Calcutta skies via chartered flights and helicopters.

The deliberate placement might have been missed by many at the first glance, and that is exactly how it may manifest a subconscious bias in the mind of a reader.

The front-page headline suggests that the BJP is polarising the polls, leaving no stone unturned and conducting road shows and shrine visits. Right adjacent to it is an article featuring one leader each from the Muslim, Christian and Sikh community in Kolkata, pictured together decrying the ‘hate plot’ and making calls to ‘stay united’.

In one breath, or shall one say one glance, The Telegraph lets the reader know about their ‘secular’ stand. And what if you don’t subscribe to it? Editorial shaming awaits you in the pages that follow.

‘Window dressing’ in simple words is how things are presented to make them look most appealing to a pedestrian taking a look at the window of a shop. It goes a long way in shaping consumer behaviour, much like newspaper headlines form voter perception.

Error of Original Entry – Yet Everything (Monkey) Balanced Out

In simple words, these are transactions recorded incorrectly. All accounts involved would still balance out, but for the wrong amounts, or the wrong reasons in this case.

Such ‘errors’ usually escape scrutiny, but a hard long look does tend to reveal patterns.

Take for example the issue of political killings in Bengal. There’s no disputing facts and numbers here, yet The Telegraph somehow manages to monkey balance out its way even here.

At the time Chief Minister of Uttar Pradesh Yogi Adityanath was raising the topic around the murders of BJP workers in Bengal, the newspaper chose to present to its readers instead, a list of BJP and RSS workers killed in Uttar Pradesh.

Another Yogi rally, another balancing act.

The news of BJP worker’s mother Shova Majumdar beaten up by TMC workers and her following demise is covered by The Telegraph as a run-of-the-mill event – “woman dies”.

To err is human, right? But these are not instances of honest 'errors'; these seem to be well thought out and carefully worded deliberate editorial judgements.

Errors Of Principle – Violating Rules Of The Game

Errors not in numbers, but in principles.

Even a well-weathered accountant may end up erring on accounting principles. But what about the times they are not errors? As a matter of principle, accountants, and in the same regard newspapers, are not expected to have biases, or take sides. But that ship of principles, sailed long back ago for some.

In instances where foul play is detected, will an accountant ever let it go as is? That depends. However, if the accountant is honest to his job, foul play is mostly reported.

But what if ‘foul reporting’ is the job description? This hit job piece at BJP’s ‘Asol’ Poriborton campaign does more than just mock pronunciations. It brings out more than bias — it exposes the disrespect, the editorial contempt and condescension one is holding towards a particular side.

There’s praise, there’s flattery, then there’s plain sycophancy. Principles or the lack of it, also consist of what you choose to stand for. A regional newspaper tying strings of praise in the name of the incumbent, doesn’t leave one with much to make of it.

Here’s another piece painting a modern day Kurukshetra picture where the entire ‘BJP army’ is battling against the lone Mamata Banerjee. The lone warrior fighting a Mahabharata or ‘Mahabengal’ in her home ground, never mind the media, muscle power and money on her side, is wheelchair ridden. Something that had already come to be the central character for the election coverage by the said newspaper.

Interesting thing to note here is that the newspaper is considered as a beacon of powerful journalism in the Liberal beltways. But then one can then debate that partisanship is neither powerful nor journalism — and risk being called highly unprincipled.

Error Of Omission – It Didn’t Happen

Omissions can be complete or partial. The forgetful accountant misses to enter the transaction into his records. But how forgetful is a newspaper in such cases? Quite so, if we talk of ‘motivated forgetting’.

Take for example the big story in Bengal. An incident, in which the source itself presented several different versions of the story.

Changing stories that rely on, well, ‘stories’ to maintain any validity.

The Telegraph here suggests that on the fateful day of the accident, some men ‘did trip and fall over’ Banerjee’s car door, while running to catch a glimpse of her. Hence, defending the CM’s version, although partially so!

It is said that there’s a fine line between fact and fiction. Often it obliterates depending on how motivated one is.

The Prime Minster of India taking the first dose of vaccine for a deadly virus that had people confined to the limits of their homes worldover.

Something which made news headlines all across the nation, probably internationally too, was buried in Page 4 of The Telegraph in the following day. And the piece too turned out to be more about the ‘app’ rather than the ‘jab’.

Let’s take a picture of the article in our mind before moving on. You’ll find out why.

Size matters — the very same day, as the biggest media story was sidestepped, almost a full-page coverage was provided by the regional newspaper to the election campaign of an MP from Wayanad.

Media has an obligation to be reasonable when it comes to information dissemination. The vaccination story, for example, was not political, but more importantly a part of an important communication — a message, an awareness for the general public that vaccines are available and safe for use.

Thus, media’s pen, unlike an accountant’s, seems to discriminate when sharing information with the stakeholders. In this case, its readers, the voters.

Is all sense of media accountability lost? One wonders.

What is the fate of the negligent accountant?

In cases when an accountant by error or otherwise files wrong information, causing losses to your company, no matter how much you would like to point all liability towards him, it will still be, strictly speaking legally, your mistake.

Vasudha Madhogaria is an observer of politics and media.