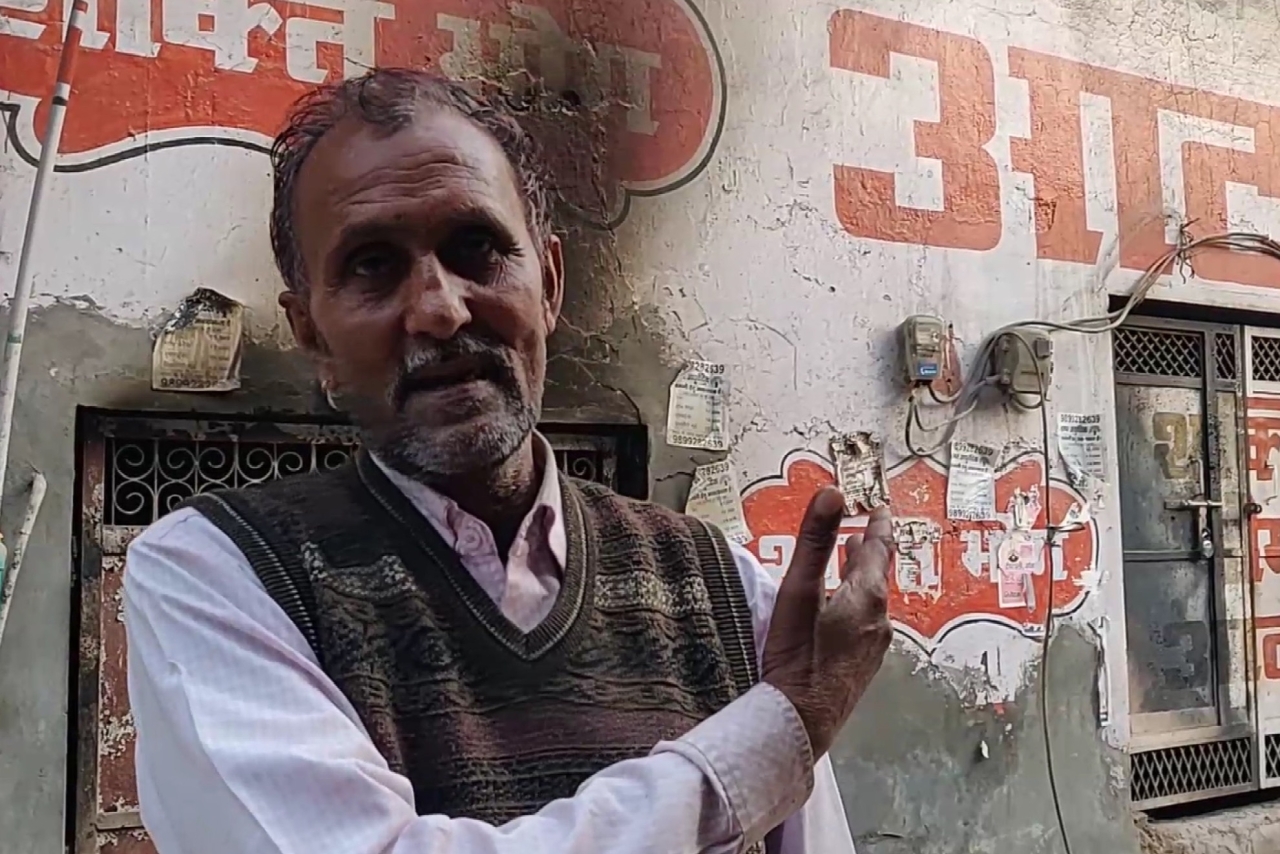 The mob that used the building of Aam Aadmi Party (AAP) councillor Tahir Hussain as a launchpad for attack, unleashing large-scale violence, also burnt the house of a Dalit family and destroyed their only source of income.

Watch the video of the mob on Hussain’s building:

Residents say this video from 25 Feb shows how mobs indulged in violence from rooftop of building where Tahir Hussain has his office (on the left side of the video) and in the streets.

On right side of the video is Hindu-populated Khazoori Khas where Ankit Sharma lived pic.twitter.com/T6hzP6fNxP

The poor family has taken refuge in a neighbour’s house, and is surviving on donated food and donated clothes.

Shobharam Verma, 61, works as a rickshaw-puller and night guard in a furniture workshop. The top floor of the workshop has been his house for the last 30 years, where he lives with his family of three – a son, daughter-in-law and granddaughter.

The mob that gathered atop Hussain’s building on Monday and Tuesday threw petrol bombs in his house that is located right across the street, he says.

Shobharam’s house is completely gutted. The mob also set afire the ground floor of the workshop, destroying the entire building.

Shobharam is on the verge of tears as he tells this correspondent, “Maalik toh jhel lega, main gareeb kaise jhelunga [my employer would be able to bear the loss, but how will a poor man like me survive]?”

This poor dalit man was employed in and living in this furniture workshop for 30 yrs. When mob from Hussain's building threw petrol bombs (residents say real target was adjoining temple), Sobharam's house was destroyed completely

On Sunday [1March] when this correspondent visited his house in Gali number 5 of Moonga Nagar in New Mustafabad, he was helping a group clear the terrace of the adjoining temple of stones and bricks.

The prime target of the mob, as per Shobharam and other residents, was this Shiva temple. The petrol bombs were meant for the temple, they say. The workshop came in the way.

They say the stone-pelting in the area began on Sunday night and continued till Tuesday. 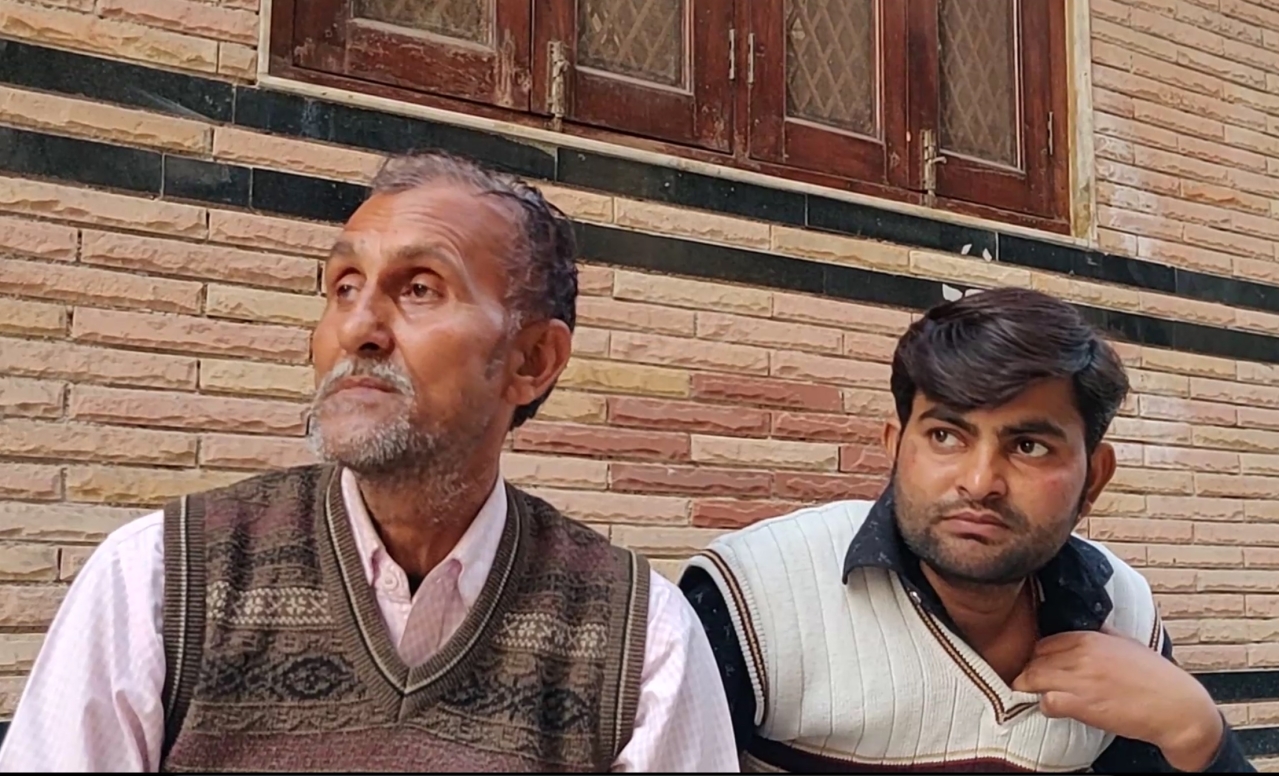 Moonga Nagar is a Hindu-populated area in the largely Muslim-dominated New Mustafabad. Across the road - called Karawal Nagar road- is Muslim-populated Chand Bagh, where the body of an Intelligence Bureau (IB) staffer Ankit Sharma was found in a drain.

Sharma lived in Hindu-populated Khazoori Khas, which is adjoining Chand Bagh. Hussain’s building stands between Sharma’s lane in Khazoori Khas and the drain In Chand Bagh.

Shobharam says that on Monday noon, he pulled down the shutter of the workshop and went upstairs in his house. The chaos was making it impossible to work. His employer, Somnath, did not come to the workshop that day at all.

Shortly later, the attackers began to enter the lane.

Once inside, the mob made the terrace of his neighbour Bijendra Verma as their attack launchpad. The temple stands between Shobharam‘s and Bijendra’s house.

“The attackers had brought a ladder. They tried to climb onto the temple but, given the height of the wall, they couldn’t. So they shifted the ladder to my house and climbed on the first floor,” says Bijendra.

“They ordered all of us to go inside our rooms, and threatened us against coming out. Then they climbed on the terrace and bolted it. We could not access it anymore,” he says.

Residents say the attackers had brought sackfuls of broken bricks and heavy stones. They now began to throw them at the temple and other houses.

Scared of the stones constantly landing at his house, Shobharam picked up his grandchild and scurried downstairs, he says. He took shelter in a neighbouring house. Others in the family followed him.

A few men entered the lane and set the ground floor of his workshop on fire. The residents began to frantically call up the police and the fire brigade, but no one took the multiple calls made.

Just then, a petrol bomb from across the street landed on the top floor. The entire building was now on fire. Shobharam could do nothing but watch the destruction, silently and helplessly.

“The fire subsided when there was nothing left to burn,” he says.

When the mob left in the evening, Shobharam tried to go inside the building but all he could see was charred wood and twisted metal. His rickshaw is also burnt, he says.

He emerged out and instead went to the terrace of the temple, to see if anything in his house was spared. He could see nothing.

Since then, Shobharam and his won Kuldeep have been living in a room provided by neighbours. His daughter-in-law and grandchild have been sent off to a relative’s family in northwest Delhi. “Someone sent us these clothes. I have no other clothes left,” says Kuldeep.

This correspondent asked for his bank account details for possible help. “All those documents have been burnt. All papers are burnt. My caste certificate is also burnt,” he says.

“Wo kaagaz kaagaz kar rahe hain. Mere kaagaz kyun jalaaye [They are all talking about papers. Why did they burn my papers?” ]he says.

The workshop owner, Somnath, visited the place only on Wednesday. “Maalik [employer] came here with his wife. He burst into tears,” says Shobharam.

Bijendra says his terrace looks like a war-site. The wash-basin is broken, the walls and the floor destroyed. 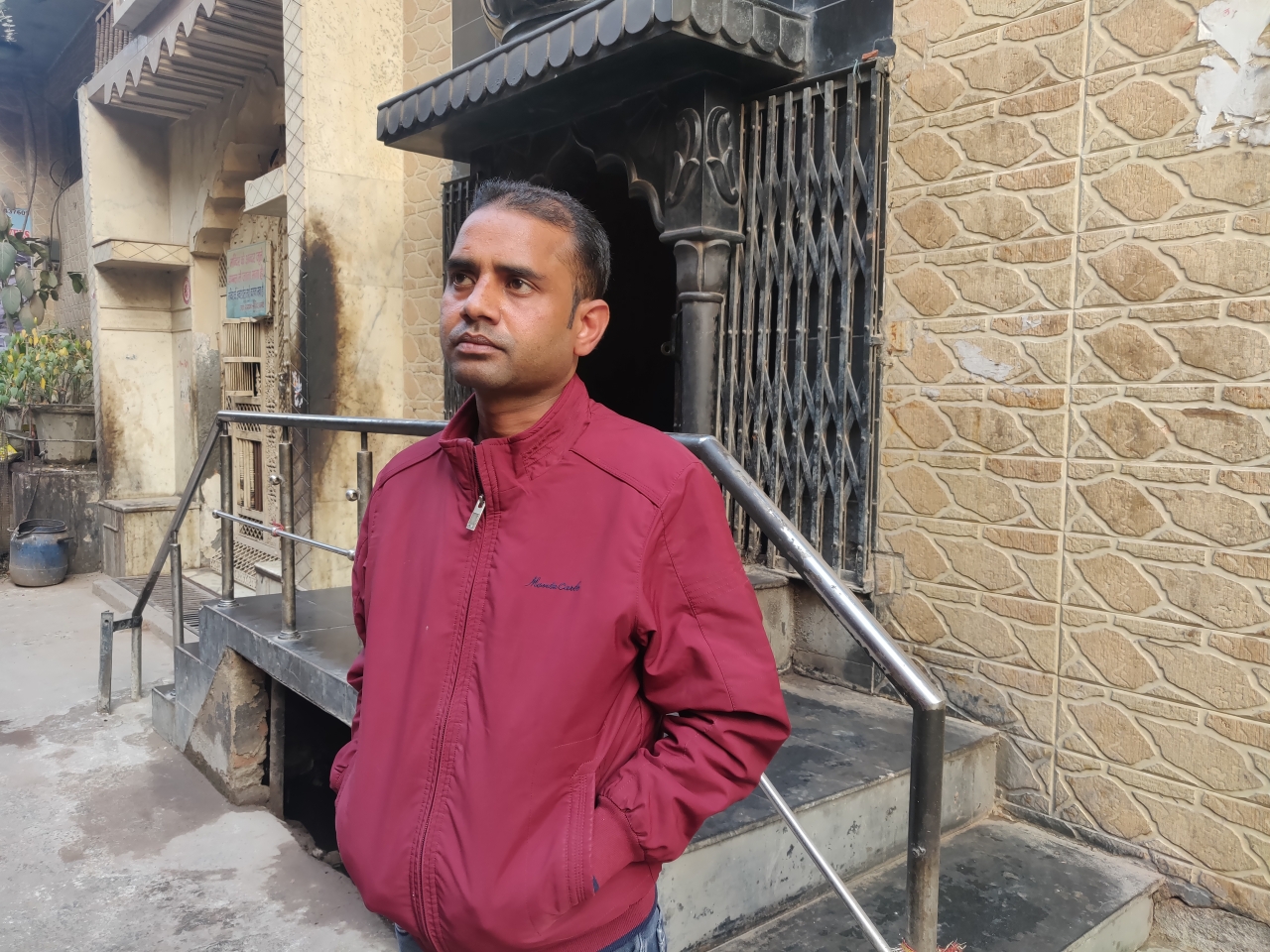 Bijendra Verma stands outside the temple. The house on the right of the temple belongs to him.

Owners of other houses also show their terrace, strewn with heavy stones and bricks and remains of petrol bombs. Some terraces have iron rods and wooden logs too, which residents say were flung from the other side.

Shobharam’s building however is the worst-affected in the lane.

In the adjoining lane, two Dalit youths say they were beaten up by a communal mob the same day. Bhaisaab alias Lala and Deepak Khatik told this correspondent that on Monday around 7:30 pm, “Muslim men” picked them up from outside Hussain’s building.

Deepak says he was dragged to ‘Katran market’; Lala says he was brought to Nehru Vihar, a mixed population colony adjoining Moonga Nagar in New Mustafabad.

Both say they were beaten up badly. Lala has sustained severe injuries on his head and around his eyes. 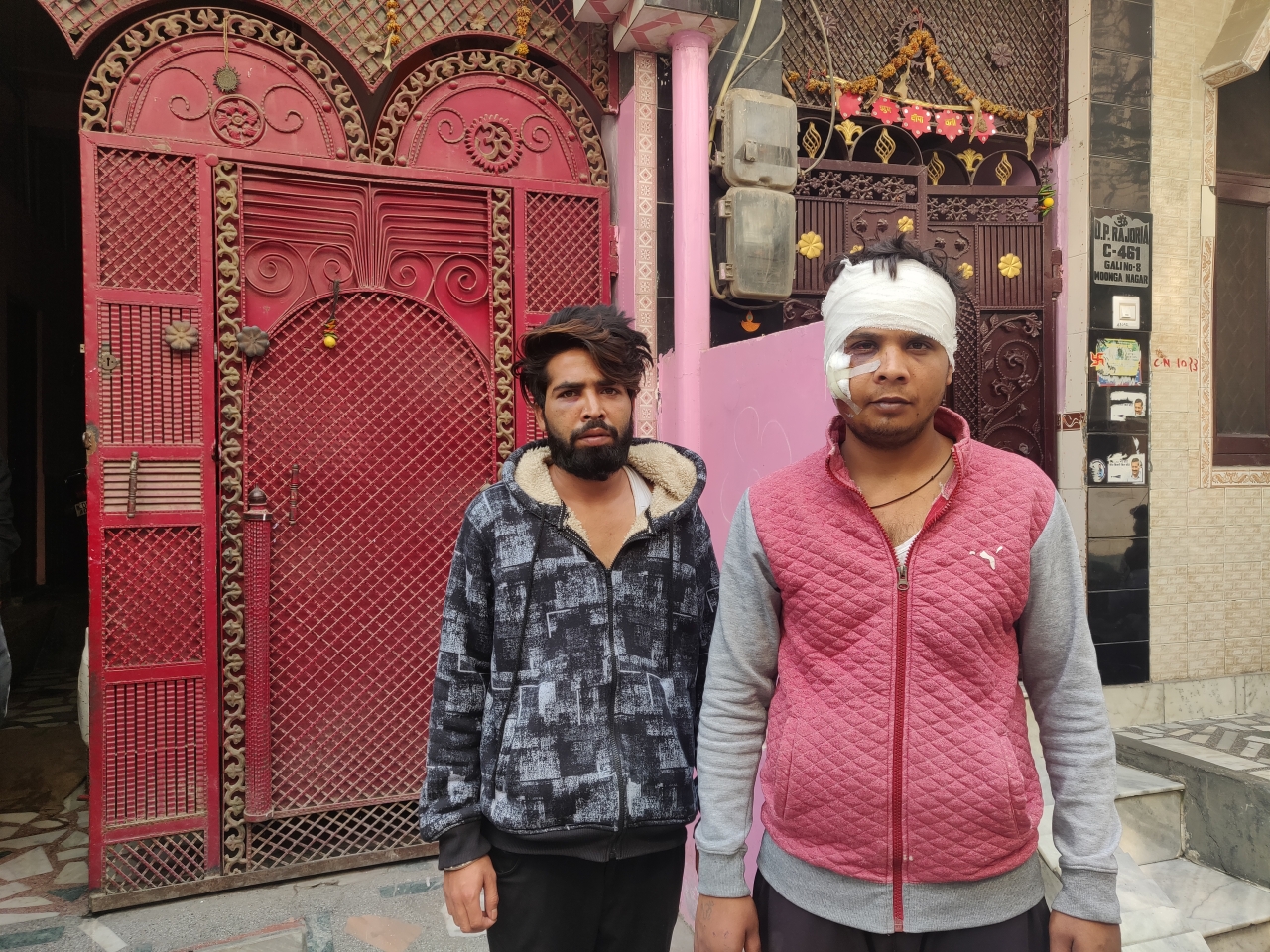 On Tuesday, another youth from Moonga Nagar was allegedly shot at by the mob on Hussain’s building.

As per a resident Sushant Kumar Thakur, the victim - Ajay Goswami - was returning home when a gunshot hit him on his back. Thakur says he rushed to the spot to help his friend as soon as some neighbours alerted him. Thakur says a stone hit him near his eye, but he managed to bring Goswami home.

He says that Goswami, who lives alone in a rented accommodation in Moonga Nagar, is admitted in Hindu Rao hospital. 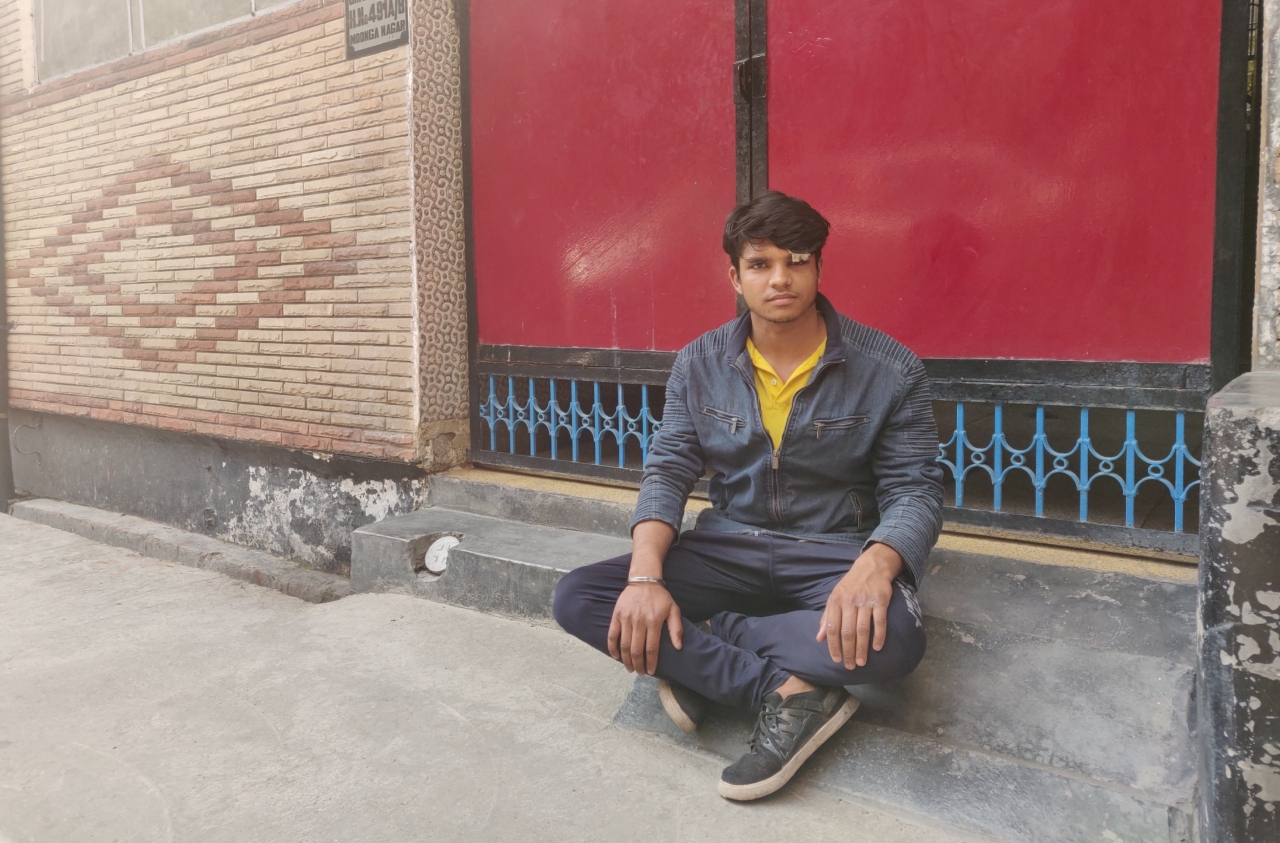 While residents of Moonga Nagar share horrific stories of property loss and injuries, mainly from the mob atop and around Hussain‘s building, Hussain has denied any role in the violence or the murder.

“…For our safety, my family and I had moved away from our home on Monday in police presence. There should be an impartial probe into the incident and action should be taken against whoever is found guilty. It is wrong to target me. I and my family have nothing to do with it,” Hindustan Times has quoted Hussain as saying.

Muslim residents of Nehru Vihar meanwhile deny the Dalit youths’ claims that they were beaten up in the residential colony or Katran market. Residents say their lane was “completely safe” during the there-day violence.

Residents denied any attack either in their lane or Kartan market happened. They also said they don't believe Tahir Hussain had any role in violence. pic.twitter.com/kW5gTifAb8

“Whatever happened, happened on the [Karawal] road. We did not let anyone enter our lane,” Abdul Gaffar, a resident, told this correspondent.

The residents said they did not believe that Hussain had any role in the violence.

Get Swarajya in your inbox everyday. Subscribe here.
Tags:
64 Shares