Mind It! The Andhra-Telangana Rivalry 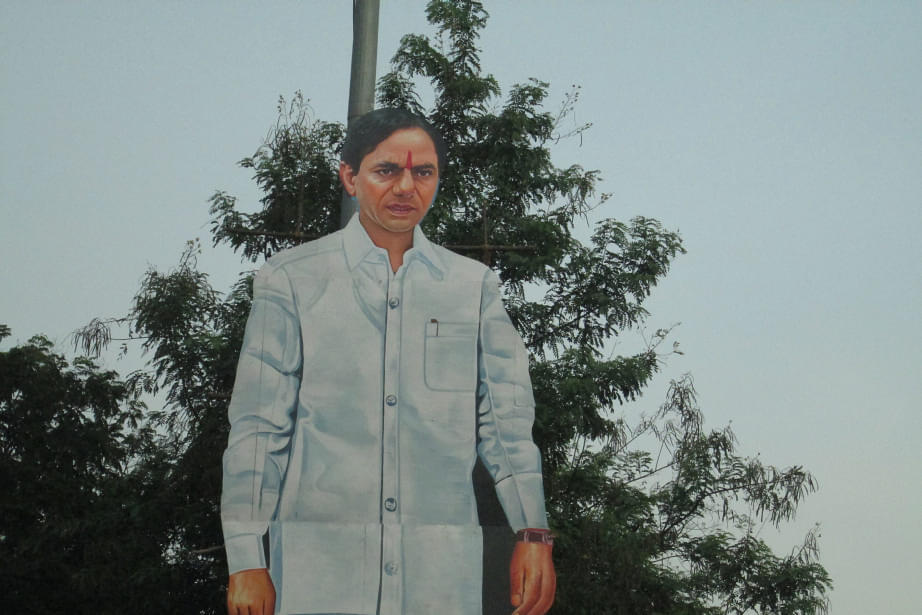 The acrimony between the two states is hotter than their weather and food. And it’s no laughing matter.

It is entirely likely that Chief Minister K Chandrasekhar Rao of Telangana—he of the gigantic tilak and impressive proboscis, carries a large chip on his shoulder.

This, despite the dignity imparted by his leanness, his crisp white cottons, his being undisputed master of the state with the Charminar, the Nizam’s palaces, all those chandeliers, silver, paan daans, hookahs, and the steel and glass of Hyderabad’s IT hubs.

This is a perceived philosophical position, of which Rao himself may not be entirely aware, mistaking his feelings instead for righteous indignation, which they certainly resemble.

The chip on KCR’s shoulder however, is not universal in nature, and he is not known to kick any dogs in his path. But it manifests most strongly with special regard to his neighbour and default rival, the redoubtable Chandrababu Naidu.

In a recent skirmish, that blazed despite the blistering heat wave that claimed the lives of scores of Andhraites caught out in the open, Rao accused Naidu of masterminding a cash-for-vote scandal in the recently held vote for the Telangana Legislative Council.

Naidu, in turn, asked, through gritted teeth, about who had been illegally tapping his phone?

He also dubbed as fake a voice-recording purported to be his, being bandied about by Rao’s party, the TRS. He said it could well have been spliced from various sources in order to malign him, and he wasn’t even sure if the voice was his, implying actors and stage managers good at reenactment.

And all this broke out, just short of the first anniversary of the formation of the two new states on June 2nd 2014. The Governor of the two new States, ESL Narasimhan, nimbly and discreetly side-stepped the fracas, even as the FIRs and court cases flew thick and fast from both sides. Each new thrust was aimed at the other, like so many vicious Khartoum javelins, with stereophonic sets of ACBs on each side, the better to both quote and confound.

A new entrant, conjoined, for the moment, to Rao’s side, is baying for Naidu’s blood too. This is the YSR Congress, led by the cross wearing and muscular Jagan Mohan Reddy, a southern Indian Travolta figure, the wealthy son of the former Congress Chief Minister of undivided Andhra Pradesh.

Jagan has done considerable jail-time already, mostly, it is alleged, for defying Sonia Gandhi and demanding to be made CM immediately after his father’s death in a helicopter crash. And also, to be fair, for possessing hugely disproportionate assets, along with his widowed mother, as well as sundry relatives and minions.

Naidu, undaunted by all the ambient noise, went ahead and performed the bhoomi pujan on June 6th for Andhra’s new capital, named Amaravati, replete with Buddhist associations, to come up between Guntur and Vijayawada. Some brokers have made killings on land speculations thereabouts, of course, and others wish they had, given the loud murmurs in the air, for long: the location was, transparently enough, far from secret, because Naidu did a lot of his thinking very much aloud.

Amaravati will have, like Ahmedabad’s Sabarmati, a 30 km waterfront, fit to host Xi Jinping too. And Naidu has been saying that it would far surpass the charms of Hyderabad (also once revived and refreshed by himself), and be a truly ‘world class’ capital.

This, knocking out the scam-related bad press off the media as it did, must have got under Rao’s skin, and taken some of the joy out of being bequeathed the relatively ancient seat of Hyderabad, what with Naidu’s stamp and odour on it from recent times.

Besides the two governments, with their respective equipage and paraphernalia, must necessarily rub up against each other for 10 years yet, well, till Amaravati gets built, timeline slippages excepted. The policemen of Hyderabad, the traffic ones, are all developing Parkinson’s disease from the tension, and so recruitment needs to be stepped up with an eye to the future.

But being wiped off the map does not suit Rao any more than it does Delhi’s Kejriwal. So Rao got his stuff together and fired a fresh salvo, aimed at getting back in the headlines, and illustrate his altogether better governance credentials, on June 12th just past.

With this, Telangana also becomes the first state in the country to put in a Right to Clearance proviso in the very first enunciation of its maiden Industrial Policy. But in fact, the Telangana State Industrial Project Approval And Self Certification Systems Act, 2014, was made law months before the unveiling of the Industrial Policy itself. This Right to Clearance will result in the bureaucrat found responsible for tardiness to be fined Rs 1,000 a day till he completes his task.

It may not, however, turn out to be that much of a deterrent, because the accused ‘responsible official’ may manage to enmesh and entangle almost everyone linked to the process of granting clearance for an industrial project. This could include the political top bosses and, potentially, include Rao himself. If only he could see it. And distributing a thousand rupee fine per day amongst a busload of people may become less disincentive and more guffaw-worthy farce as we go along.

Still, diplomats and captains of industry present at the unveiling of the Industrial Policy and this RTI-like Right to Clearance sang hosannas of praise. They also predicted Hyderabad and Telangana will become a most favoured destination for investment under Rao’s sagacious leadership. It all made for excellent press.

The flatterers, predictably, included all the ones invested in Hyderabad and its environs, including the bosses of ITC, GMR, the Ruia Group, the GVK Group, Walmart India, Apollo Hospitals, TCS, and august trade bodies like NASSCOM, and CII .

This story has a backstory, of course. It was, after all, in Naidu’s Telegu Desam Party wherein Rao was once ensconced, albeit with some assistance from an earlier still stint as a Congressman.

Rao, curiously, for a South Indian, knows his Hindi to deal with Delhi, but not his English. Not even to speak directly to his then Italian/Indian High Command.

Naidu, on his part, does a masterful ‘mind-it’ Andhra-accented version of it, that proves altogether serviceable, if a tad menacing, even when he’s trying to be nice. Besides, Naidu, the son-in-law of the legendary NT Rama Rao, has long been a highly successful CM of undivided Andhra Pradesh.

He was IT-savvy years ago, much before Narendra Modi rose to prominence, and even hobnobbed with Bill Gates, getting him to base Microsoft’s development centre and Indian HQ in Hyderabad. Naidu is credited with rejuvenating and modernising Hyderabad/Secunderabad, cleaning it up, putting in infrastructure and new hotels and starting a real estate boom there.

He also began to give Bengaluru a run for its money as the IT Capital of India. But even after all this, he came a cropper in the elections, for ignoring the villages and the voting population in them. That was, nevertheless, a long time ago.

But here he is again, Chandrababu Naidu, in his bright yellow TDP party colours, the current CM of the newly truncated Andhra Pradesh, with 16 seats won in the recent Lok Sabha elections to boot—contributing its crucial strength to the ruling NDA at the Centre.

The demand for a separate Telengana, headed by Rao today, has also been simmering for decades, but the opportune moment came in the run up to the general elections of 2014, when the High Command of the UPA thought it would afford it an electoral boost.

Instead, the rump of Andhra Pradesh, led by Chandrababu Naidu, joined hands with the NDA and won the bulk of the Lok Sabha seats from both halves of the old state.

What can we do now? Let us wait for the next episode of this pinging-ponging thing, without however laying any hurtful bets on who will come out on top of whom…