Minor Girl Who ‘Eloped’ And Had Conversion-Nikah Files For Divorce; Swarajya Reported The Case In 2018 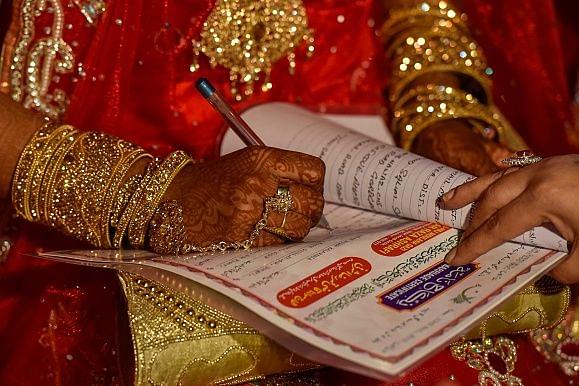 About four years ago, a minor girl ‘eloped’ with a man, converted to Islam and had nikah with him.

The girl’s father filed a police case against the “kidnapper”, knocked at the doors of the National Scheduled Castes Commission and was dragged to court by his own daughter for filing a "false" case.

With her Class 10 marksheet that showed her to be a minor, the father made multiple visits to the commission’s office and the local court over the next several months.

He eventually stopped all efforts to get her custody back, after it increasingly became clear to him that she was adamant on her decision.

Last week, the girl left the man and returned to her father. She asked him to help her get a divorce and start a new life.

Swarajya reported about her ‘elopement’ and the court case in 2018.

When this correspondent spoke to the girl on 30 December 2021 after her legal separation, she said the key reason of the split was that the man would constantly ask her to clean, cook and eat meat, and the butcher’s knife used at his house seemed a constant threat to her life.

“He used to beat me up over my hesitation to cook and eat meat. I often felt he would kill me,” she said. “I still fear that.”

The girl, Anuradha, is a native of Dharmpura village in Nagina tehsil of Bijnor district in Uttar Pradesh.

When she was still in school, she was seeing Danish Hussain unknown to her family. Danish lived in Nagina tehsil but in a different village.

Her father Dayanand Singh told this correspondent in 2018 that when she did not return till 6 pm, he grew anxious and went to the Nagina bus stand from where the girl took a bus daily.

On inquiring, he learnt that the conductor of the bus was Jai Prakash Gupta. A few days earlier, Anuradha had told him that Gupta proposed marriage to her.

Suspecting that Jai Prakash had abducted her, Dayanand went to the Nagina Police Station. He told the cops about the matter and handed to them a photograph of his daughter. The cops assured him they would look into the matter, but did not file a case.

Dayanand belongs to the scheduled ‘Chamar’ jaati and works as a mistri (construction labour). Unaware that the police should have filed a case and booked the suspect, Dayanand began visiting the cops every day hoping for an update.

Two weeks passed but the police did not recover the girl. They told him they had retrieved her call details of four days prior to her disappearance but those weren’t offering any clue.

An activist from Bijnor, who belongs to the same jaati as Dayanand and works for welfare of the Scheduled Castes, intervened when he learnt about the case.

The Nagina Police finally registered a first information report (FIR) on 1 June 2018 (number 182). The FIR named Jai Prakash as a suspect under IPC sections 363 (kidnapping) and 366 (kidnapping a woman to compel marriage).

The activist, Bhupendra Pal Singh, was unhappy with the FIR as the police had not added sections of the Scheduled Castes Prevention of Atrocity Act. He accompanied Dayanand to National Scheduled Castes Commission’s office in New Delhi to give a complaint.

The letter by Dayanand (of which Swarajya has a copy) said that the police had neither recovered the girl nor added SC-ST Act against suspect, Jai Prakash.

A few days after this visit, the Nagina Police got a lead. Investigating officer Amit Kumar retrieved the call details of the girl’s phone for a longer period before her disappearance and suspected that it wasn’t Jai Prakash but one Danish Hussain who had ‘taken’ the girl. He revealed the information to Dayanand, who said he had heard this name for the first time.

Kumar called up Danish, confirmed that the girl was with him and asked him to ‘return’ her or face consequences. He subsequently removed Jai Prakash’s name from the case diary and added Danish’s.

Bhupendra Pal Singh, on his part, apprised the commission of the fresh information. The commission sent a notice to the police asking details of the probe.

Before the police could file a formal reply, Danish filed a writ petition in Allahabad High Court asking the case against him to be quashed.

He made Anuradha, who was now his wife and renamed Nisha Naz, as co-petitioner.

The petition (a copy of which is with Swarajya) said the FIR should be quashed as Anuradha was a major as per as Aadhaar card and the girl’s father had initiated criminal proceedings against him simply because he was opposed to their relationship.

In its order on 1 August 2018, the court directed the girl to present himself before the chief medical officer for a bone ossification test within 10 days to ascertain her age. The court ordered a stay on Danish’s arrest and listed the next date of hearing as 23 August.

Bhupendra Pal Singh explained to Swarajya that the confusion over the girl’s age had occurred because her year of birth in Aadhaar was mistakenly noted as 1999 whereas her birth date was mentioned as 6 June 2001 on her Class X certificate issued by Allahabad High School and Intermediate Education Board. He opined that the court should have considered the school certificate to ascertain the girl’s age.

This opinion was reiterated by the commission.

In a hearing in its office on 6 August 2018 attended by deputy commissioner of Bijnor district, the commission’s then chairman Ram Shankar Katheria wrote that Aadhaar card is not an authentic proof of age.

The commission directed the police to pursue their investigation treating the girl as a minor and accordingly initiate proceedings against all those involved in her conversion and nikah.

Anuradha’s conversion certificate produced before the court, that was issued by one Moulana Muhammed Abid Qasmi of Al-Jamiatul Islamia Falah-e-Daran located in Delhi’s Shastri Park area on 1 June 2018, mentioned her age as 19.

Father Eventually Gave Up On His Daughter

Over the next several months, the court repeatedly stayed arrest of Danish as the girl did not present herself for bone test, and the commission repeatedly directed the police to initiate criminal proceedings treating the girl to be a minor.

The police ignored the commission’s diktat, saying their hands were tied as the case was in court now.

This correspondent followed the case till December 2018, but gave up after Dayanand Singh gave up on his daughter. The trial did not get a closure; it so happened that Dayanand stopped attending the hearings and the girl never got a bone test done.

“She is as good as dead for me,” Dayanand told this correspondent that month.

The Disputed Marriage Broke Up Soon After

Last week, Bhupendra Pal Singh informed this correspondent that Dayanand had approached him again, this time asking help in getting his daughter divorced from Danish.

It turned out that Anuradha had left Danish a year after their marriage.

She disappeared from his house one day and quietly went to her sister’s house in another tehsil of Bijnor. She knew she wasn’t welcome in her father’s house or village anymore.

“It’s an all-Chamar village. The villagers had boycotted Dayanand after his daughter brought shame to the community. Though the boycott was lifted after a few weeks, it was on the condition that Dayanand would not bring the girl to the village again so she doesn’t become a bad influence for other girls,” Singh said.

The villagers’ opposition was over religion.

“They wouldn’t have reacted this way if the boy was Jai Prakash and not Danish. Because in that case, the family would have accepted the relationship, even if reluctantly,” said Singh.

Anuradha, in a brief conversation over the phone, told this correspondent that after she began staying at her sister’s house, lockdown came into effect. It was followed by a series of lockdowns and Anuradha continued to stay at her house.

Some months ago, she learnt that Danish had found out her address.

“I changed my location for some time by staying at a different relative’s house, but I felt constant threat from Danish. What if he killed me? So I decided to come to Nagina [tehsil] and meet him in the presence of my family and other elders. I asked him if we could meet once and get a formal divorce. He agreed,” said Anuradha on 30 December after giving a joint affidavit with Danish in court that the couple was separating by choice.

The affidavit says that all was well between the couple in the initial days but they began to have frequent spats, and that Danish had pronounced talaq on her request two months ago. The affidavit adds that with the separation, the pending court case has become redundant.

Asked about her future plans, Anuradha simply handed the phone back to Singh.

This correspondent asked Singh to pass the phone to Dayanand, but the latter declined to speak saying “there was nothing to talk anymore”.