Modi On Gau Rakshaks: Why His Social Messaging Has To Take Centre-Stage 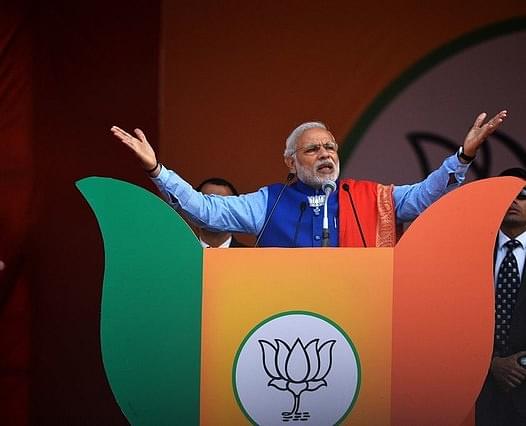 Prime Minister Narendra Modi’s forceful repudiation of freelance cow vigilantism and anti-Dalit violence can be dismissed as a political damage-control exercise in the wake of recent incidents where assorted “gau rakshaks” thrashed Dalits for skinning cows, but this would be wrong. While no one should dismiss the political meaning behind his bashing of gau rakshaks on two consecutive days, if this were mere “damage-control”, as Janata Dal (U)’s Pavan Varma said, it would not have been repeated, especially in the run-up to the Uttar Pradesh elections, where there is a huge pro-cow vote to reap.

Modi’s statement on Saturday at his national townhall, and his criticism of anti-Dalit violence yesterday (7 August) in Telangana, are not run-of-the-mill political observations. They have been followed up by the Rashtriya Swayamsevak Sangh (RSS) itself coming out strongly against people taking the business of cow protection into their own hands.

If he continues down this path, Modi’s social messaging will become as important as his economic and political chutzpah, putting him in line for an extended stay at 7, Race Course Road. For the BJP more than any other party, broadening the social base calls for more radical social policies than the Congress or the pseudo-Left.

Modi’s first statement used words that indicated a personal sense of anguish, and not the usual, yawn-inducing “law will take its own course” type of political verbiage. Modi said “I get so angry at those who are into gau rakshak business. A Gau Bhakt (cow devotee) is different, Gau Seva (cow protection) is different. I have seen that some people are into crimes all night and wear the garb of gau rakshaks in the day. 70-80 percent will be those who indulge in anti-social activities and try to hide their sins by pretending to be gau rakshaks. If they are true protectors, they should realise that most cows die because of plastic, not slaughter. They should stop cows from eating plastic.”

This is not the statement of someone who is saying things only to protect his vote interests. It is one of a piece with the Prime Minister who warned parents to rein in their boys, and talked about toilets and latrines for girls in an Independence Day speech.

Yesterday, he made a more melodramatic statement, when he spoke out against anti-Dalit violence in the name of cow protection. “We should put a full stop to it. You can shoot me rather than target the Dalits.”

One again, this is more like the warning of a leader telling his own flock not take such violence as par for the course. Sure, there is the need to protect the BJP’s Dalit voter base, but this is not the whole story. For Modi is indicating that he is willing to take the cow-boys head on.

Consider what the Vishwa Hindu Parishad thinks of his statement. One VHP functionary in Uttar Pradesh, Braj region Vice-President Sunil Parashar, said that the “people would not spare Modiji for his remark and BJP would not be able to come in power again in the 2019 Lok Sabha polls”.

The VHP’s antagonism to Modi reflects their wariness with each other in Gujarat when Modi was Chief Minister, and refused to allow them to create communal mayhem. In the 14 years that Modi ruled Gujarat, barring 2002, which Modi himself recognised as “mere kaal ka kalank” (a blot on my record), no communal riot happened. His sharp reaction to the anti-Dalit violence is thus more in line with what he showed in Gujarat – an abhorrence for freelance trouble-makers using religion for disturbing law and order.

The RSS, the BJP’s ideological mentor, also chipped in, separating the work of genuine gau sevaks, from the activities of rogue elements operating under its cover. RSS General Secretary Suresh Bhaiyyaji Joshi called these elements “opportunists” and had this to say in a statement: “RSS appeals to all citizens that they should not link these condemnable efforts of a few opportunists with those devoted to the pious work of serving and protecting cows and expose them.”

That Modi’s rivals are worried about this decisive shift in the BJP-RSS line is clear from their rejection of his statements as humbug. As usual, they shifted their goalposts by asking about his silence on the Dadri killing (wrongly, for Modi did condemn it), asking why he had not spoken earlier, and why he is not taking action (forgetting that law and order is a state subject).

The message both Modi and the Sangh needs to take seriously is this: the more the Parivar moves towards social egalitarianism and focuses on caste atrocities, the stronger is their probability of holding on to power.

More than an economic liberaliser, Modi has probably calculated that India is ready for social change, as aspirations for dignity and a better life are bubbling up from below. As long as social change tops the Modi-Sangh agenda, they will be coasting along the tide of history. Or else they will left on the dungheap.

While cow protection and Ram mandir will remain emotive issues for Hindus of some stripes, Modi will realise that their actual electoral impact is lower than their decibel-levels. One can only hope that Modi will continue calling the bluff of the fringe elements.