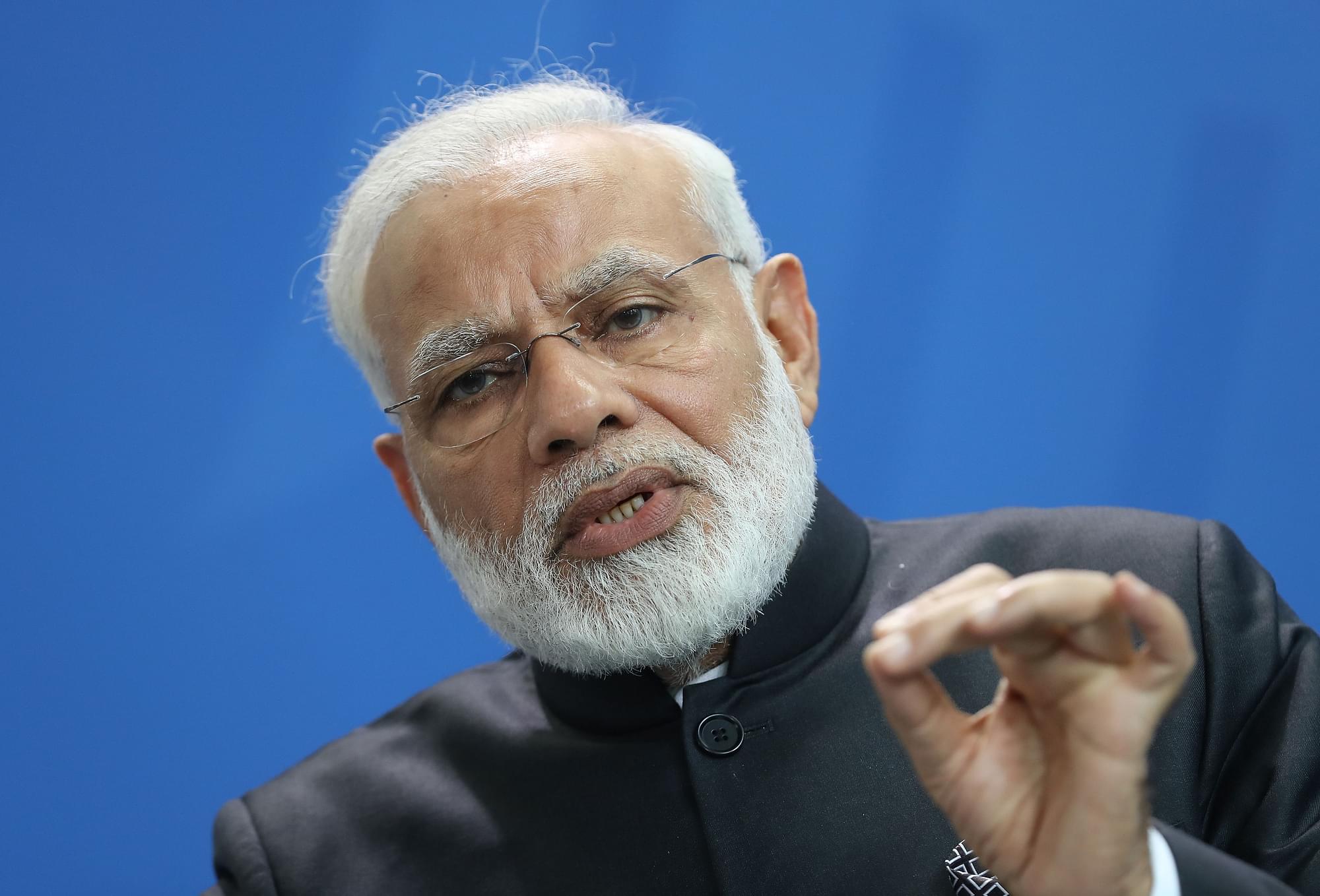 Prime Minister Narendra Modi flagged off the new year with a 95-minute marathon interview to Asian News International (ANI) on Tuesday (1 January). Many political pundits view this as Modi kickstarting his party’s campaign for the 2019 general elections. Though the framing (and thus the quality) of questions could’ve been a notch better, ANI deserves two cheers for at least not pulling its punches.

In this extensive interview, Modi talked about a wide range of issues. Here are five key takeaways based on his answers, which tell us a lot about the kind of campaign he will be running for the next 100 days.

Modi doesn’t seem to be in a mood to sacrifice fiscal prudence to pacify disgruntled constituencies of farmers, middle class or traders. He ruled out loan waivers because he believes that most of the farmers who are committing suicide aren’t even part of loan economy and thus the section that needs relief the most won’t benefit from waivers.

Further, the Prime Minister pointed out that loan waivers have been in vogue since Devi Lal’s time but still the problem of debt continues to plague the farming community and the need was to make sure that farmers don’t need to take heavy loans in the first place rather than pacifying them with doles. He explained how his government has been working on long-term solutions to reduce input costs and post-production reforms and not quick fixes.

On the middle class, Modi said that his government’s actions have benefited this section the most with low inflation, possibility of expansion of healthcare sector which will create more jobs, increase of medical seats, loans Mudra Yojana, and blossoming of the startup ecosystem.

It appears that the party will be focusing more on making the middle class realise how much they have benefited in last four years, rather than giving them big direct relief. This strategy hasn’t worked so far and only caused more irritation thanks to smug cartography employed by the party’s propaganda cell.

Whether Modi’s personal appeal will work is left to be seen. In this author’s understanding, Modi seems to be banking on the middle class believed to be less greedy and see wisdom in his work for the nation. He, perhaps, believes that as campaign picks up pace and TINA (there is no alternative) factor kicks in, the middle class will come back to him as they get spooked by the prospect of Rahul Gandhi becoming prime minister.

On traders, Modi came out as more sympathetic. He acknowledged how some small traders have faced inconvenience. He appeared sensitive to their concerns and promised that the government is taking steps to address their woes.

He also tried to convey the complexities of the working of GST council and how it can’t get anything done on its whim even if it wants to. “We wanted to take a decision that those traders who are in the Rs 20 lakh range and incur a tax liability, that should be increased to Rs 75 lakh and give them some relief. We couldn't do this in the GST council meet, states have some reservations, so it has gone to committee. Once the committee reaches a decision it will benefit a number of people,” he explained.

So, the message to traders is: we hear you and we are constantly working on improving the system. Give us time. Only time will tell if traders buy this humility of Modi but the Prime Minister has done good by talking straight from the heart.

2. Setting the record straight on few popular propaganda of opposition

Modi’s poor communication strategy during the last four years has allowed his detractors to spread many canards which have become popular myths, thanks to constant hammering by the opposition without effective counter from the ruling party.

Some of these are: that demonetisation didn’t work because Modi implemented it in a “jhatka” fashion rather than doing it in stages; Modi and the Bharatiya Janata Party (BJP) are politicising surgical strikes and trying to win electoral brownie points riding on the soldiers’ coattails; Modi has allowed economic offenders to run away from the country; Modi spends more time in foreign countries than in India; GST has been poorly implemented due to Modi’s inefficiency, and so on.

The Prime Minister set the record straight on all these issues. He explained that demonetisation was not a jhatka and it was in the works for an year. He talked about the black money scheme (Pradhan Mantri Garib Kalyan Yojana) in which he “beseeched people to take advantage of scheme or else we (GoI) would have to take steps to change the situation. This hasn't happened overnight. This process took one year...only after that we had to take this step”.

On slower economic growth, he explained that due to tough reforms, it is natural for growth to slow down and pointed out how economic growth fell drastically after India launched many reforms in 1991. “If any process is changed, take for example, the Railways, if a bogey changes tracks there is a change in speed,” Modi said.

On economic offenders fleeing the country, he said that they didn’t run away with the help of his government but because of fear of his government. “Had there been governments like earlier, same dostana would have continued, lootna hai, looto; khana hai, khate chalo. They would have no need to flee,” he explained and assured that they will be held accountable for every penny.

On politicisation of the surgical strikes, Modi said that it was the opposition which raised questions on the ability of armed forces and no minister from the government came forward to speak on the matter. Only the army officials briefed the media. So, the blame for politicisation of strikes lies firmly at the opposition’s door.

On perceived poor implementation of the GST, Modi said that it’s a big transformation that is technology-driven. So, some glitches are expected. The important point he made was that the government is receptive to the problems arising out of the implementation and constantly taking steps to address these issues.

On accusations of taking too many trips abroad, Modi explained that doing so has become necessary because of number of multiple forums, summit level meetings. "It has become mandatory,” he said.

He pointed out that his predecessor Manmohan Singh also had to it but the difference is “earlier nobody used to notice the place they would arrive, even the place from where they departed from. My visits are noticed because I interact with people and take decisions”.

In this interview, the Prime Minister made it clear that the 2019 general election will be fought only on vikas, i.e. development and the party has no intention of taking up the Ram Mandir issue before the election. He exhorted the Congress to not send its lawyers to delay the proceedings. One hopes this is just public posturing of a statesman and not his naivete. You can’t expect your opponents to gift a win on a platter.

On question of bringing ordinance for Triple talaq but not for mandir, Modi clarified that the government brought in the ordinance after the SC gave its verdict while the mandir issue is still pending before the court. This legalistic excuse is going to cut no ice with core supporters. Additionally, if a matter being subjudice is the only excuse, then why isn’t the party not bringing an ordinance on Sabarimala since the apex court has handed down its verdict on that? This shows that the BJP and Modi remain vulnerable on cultural issues that are dearest to its core support base - lakhs of booth workers who get out the vote on election day.

The BJP has no intention to deliver on Hindu causes beyond paying lip service. And it can trust Congress to capitalise on this vulnerability and spread this message tailored to different constituencies through its propaganda channels.

4. If it was politician Modi fighting in 2014, this time it will be Modi the statesman

Modi presented himself as a statesman in the interview and not a politician merely fighting for his re-election. He appeared prime ministerial. When asked about 2018 being a bad year for his party, he turned it around and said the year was great for the country as lakhs of poor got insurance and treatment - up to Rs 5 Lakh through Ayushman Bharat Yojna,18,000 villages were electrified, children from tier 2, 3 cities, villages and from financially weak background won medals in sports tournaments, and 104 satellites were put in the orbit.

By refusing to succumb to reckless populism, Modi is trying to set a different narrative. He is not taking Rahul Gandhi’s bait and participate in this race to the bottom. When he talks of a New India, he is showing that it was not just a jumla, and he intends to lead by example.

While this high idealist approach may result in loss of votes among the disgruntled sections of voters, he is hoping to make up for it by making crores of first time voters, middle class and the educated understand what he is trying to do.

Instead of making this election Mahagathbandhan vs Modi, he tried to set a narrative that in reality, Mahagathbandhan is not against Modi but what Modi represents, which is aspiration of the people of the country. “It is going to be janta versus gathbandhan. Modi is just a manifestation of public love and blessings,” he said. In this interview, in a subtle manner, Modi tried to show himself above the petty politics of jealous politicians fighting to save their skin, and laid a sole claim on the soaring aspirations of a new India.

5. Vote on basis of what I have done not what I promised

Modi is banking on people to take note of the work his government has done in the last four years. He is hoping that people don’t harp much on many promises he made in the run-up to the 2014 general election which he has failed to deliver. On failure to send the corrupt to jail, Modi said many are out on bail and he hoped there won't be any delay in justice. When ANI stressed that he was elected precisely to not have these delays, Modi replied, “The country has belief that so much has happened in five years that is why they have so much faith in Modi.”

On Ganga clean-up, he was humble but honest in his answer. He explained how he had to take five states along, analysed why earlier attempts to clean the Ganga failed, then the deficits were filled. He told how a 120-year-old drain was just closed which polluted the river. “I am not content with this...still working hard on it. We will be successful,” Modi assured.

Barring the vulnerability on Hindutva issues, Modi hit all the right notes in his first interview of the year. There should be no doubt that the Prime Minister has sounded the poll bugle. And he will be batting on front-foot for the next three months. Moving forward, the opposition, which had been setting the narrative so far, will find it incredibly hard to continue doing so.