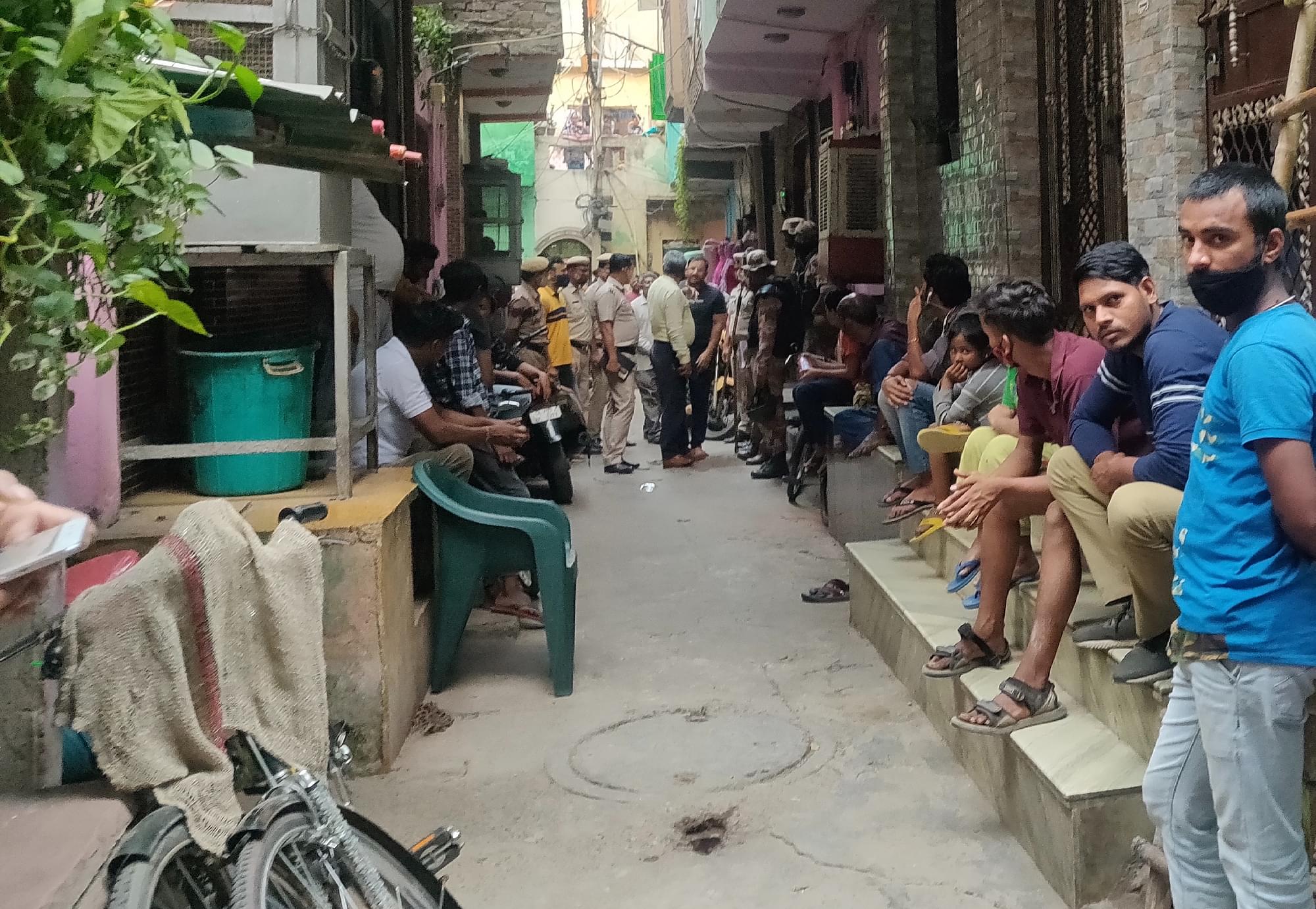 A view of the colony on 22 March

National newspapers have given the incident a passing coverage, but a colony in New Delhi witnessed a violent mob attack on the night of 20 March, 2021, over an interfaith marriage.

A Muslim mob barged into a Dalit Hindu basti in Sarai Kale Khan area around 10:30 pm, and attacked the houses with bricks, broke coolers and pots, thrashed men and women, molested minor girls and vandalised two-wheelers parked outside houses. The incident has partly been captured on a CCTV camera near the entrance.

Watch a video below:

Returning from a Harijan Basti in Delhi's Sarai Kale Khan. Last night, a mob launched an attack on a Valmiki basti only because a Valmiki man & a Muslim woman married. The mob was enraged because the woman gave statement to police that she married with consent. Disturbing details pic.twitter.com/zb4YBYG1kW

The ‘trigger’ for the attack was a consensual interfaith marriage between a Hindu man and a Muslim woman, both adults.

In fact, hours before the attack, the woman had appeared in the police station and given her statement of consent. They had married in a temple on 17 March.

A certificate from a Yamuna Bazar-located temple dated 17 March says the couple married as per “Hindu Vedic rites and customs”. The certificate bears signatures of the pandit who solemnised the marriage, and two witnesses – both Hindus.

Another certificate from the same temple issued on the same day says the woman, Khushi, is a Muslim and has embraced Hinduism out of her own free will. Her name after the conversion remains unchanged.

These correspondents visited the area on 21 March. From Hazrat Nizamuddin metro station, a walk of about 500 metres leads one to the ‘Harijan basti’. The basti comprises small but pucca houses, all standing cheek-by-jowl in the claustrophobically narrow lanes, where a four-wheeler cannot pass.

Paramilitary forces are guarding the basti, and a police team is holding a conversation with the enraged residents.

All residents are from the Valmiki community.

Rajni, mother of the man, Sumit, whose marriage with Khushi triggered the violence, is walking in the lane with her face fully covered by her dupatta.

She says she is scared for her life.

Rajni is a homemaker while her husband is employed with a private company. “Sumit is my only son, born after three daughters. They won’t spare him if he comes in this area again. What am I supposed to do now?” she asks helplessly.

She says Sumit is 22 and is still a student. He does odd-jobs to supplement the family’s income.

She says Sumit and Khushi met about three years ago. “When they expressed their wish to get married, I met her family. But they insulted me saying we are a family of “choohras” and “bhangis”. I returned after listening to their abuses. I told my son to stay away from her,” says Rajni.

She says Khushi’s family fixed her marriage elsewhere, in their own community, but she threatened to commit suicide.

“It was only on 19 March that I learnt they had quietly married in a temple. The police told us to come to the police station the next day for a hearing.”

She says that at the police station, the officers kept her family away from the Muslim side for their safety. The formalities took quite some time and went on till 10 pm, after which the police took Sumit and Khushi in their vehicle to a place near a Delhi border. Scared, Rajni and her husband did not return to their house that night.

“From the police station, we went to a relative’s place. We were not at home when the attack happened,” she says.

“Had we stayed, we would have been killed.”

Residents say that soon after the woman’s family learnt of the temple wedding, they approached the police saying their daughter had been missing. The police tracked the couple, and the date of their appearance in the police station was fixed on 20 March.

Residents say that on the morning of 20 March, a woman named Safina (some said her name is Sabina), daughter of a wealthy and influential local named Suleiman, visited the colony with a group of men and “threatened” them that if the colony sided with Sumit, there would be “khoon ki holi”.

All Valmiki residents that these correspondents talked to, testified to Safina’s visit and the threats.

Ravi, a resident, said that Safina gathered a mob in the name of “qaum” (religion), with the intention of “attacking Hindus” and repeatedly warned them of “khoon ki holi”.

Vijay, a resident, shows his bandaged hand. He says he was was attacked with a knife.

“When I heard a commotion and came downstairs, a man attempted to attack me with a knife. I held the sharp edge of the knife to prevent a stab,” he says

A woman who lives near the entrance of the basti, says the mob was holding swords. “They first threw bricks at my house. You can see the marks. Then they held me by my hair. My daughter was still outside. When I tried to push her inside the house, they tried to pull her clothes,” she says.

The girl, 11, testifies to it. “A lot of men arrived in our colony. They beat up my mother and pulled my top,” she says.

The woman says Suleiman is into sattebaazi and is a criminal. “He has autorickshaws running. He is a big criminal. All of us have given his and his daughter’s name to the police, but the police are ignoring our statements,” she says.

Residents are unhappy with the police action. They say the police hurriedly cleared the mess in the streets on the morning of 21 March to “destroy evidence”.

“The police have taken no action against the people we have identified, particularly Safina. They are also deleting the videos of the incident from our mobile phones,” a resident says.

Sarai Kale Khan in southeast Delhi is an urban village with congested streets, where a little more than half the residents are Muslims. Residents say that most of the land belongs to the Hindu Gujjar community.

With heavy influx of domestic migrant labour in the last two decades, the Gujjars have converted their houses into bland buildings with multiple one-room sets. Residents say some buildings have as many as 50-60 one-room sets.

They say that three-fourth of the total Muslim population in the area comprises tenants who work as migrant labour. They say many migrant youths are into crime.

Outside of the basti, Muslim residents are not willing to talk about the incident. They refuse to be named or photographed. After about 100 metres, residents say they cannot comment on the matter as they are not eyewitnesses to the attack.

Rajkumar runs a Valmiki temple about 300 metres from the basti and is respected as a community leader. He says he was among those who the police called to the police station to witness Khushi’s statement.

“We were of the view that the matter should be settled in a panchayat, outside of police station. Little did we know that the other side would come with a mob,” he says.