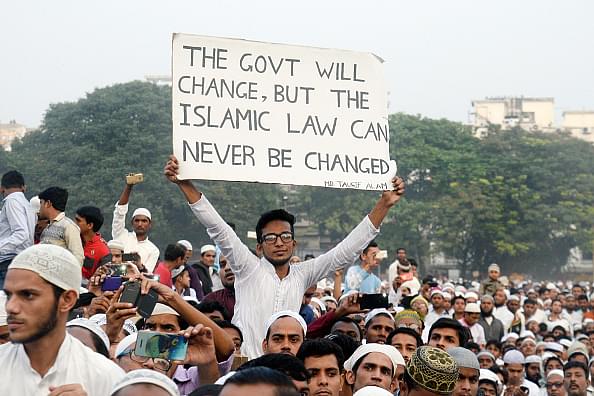 Khan’s tweet came as a response to a statement made by Yati Narasinghanand Saraswati, priest of a temple in Uttar Pradesh’s Ghaziabad district, against Prophet Mohammed at a gathering in Delhi’s Press Club a few days earlier. A video of the gathering had leaked and got widely circulated on social media.

Khan tweeted that Narasinghanand’s tongue and head should be chopped off, but because Indian law does not allow him to do so, the Delhi police should take cognizance of the statement made by the priest.

Khan may have craftily worded his post in a way that it can be argued that he did not give a beheading call and was merely expressing a wish admittedly impossible under Indian law, but he played a dangerous game and the resulting events are proof of that.

Since Khan’s viral tweet, thousands of people are now advocating his call.

On social media platforms like Instagram, users have begun to upload videos placing a heavy bounty on Narsinghanand’s head. In UP’s Bareilly district, participants of a huge protest rally on Friday raised slogans for beheading of the priest.

Finding the threatening post by Khan a violation of its policies, Twitter deleted it the next day. Subsequently, the Delhi police filed a first information report (FIR) against Khan for promoting enmity between groups and criminal intimidation.

A day earlier, an FIR was filed against Narasinghanand based on a complaint by Khan at Delhi’s Jamia Nagar police station for hurting religious sentiments.

Despite these actions, Amanatullah Khan’s post has put Narsinghanand’s life at a huge risk. Let’s get this straight: It’s very likely that Khan’s call will be acted upon, be it now or some years later.

Of late, the issue of blasphemy has emerged as a key rallying point worldwide, and has monopolised political conversation in several countries. These include India’s neighbours Pakistan and Bangladesh, where violent rallies have been held in the recent past in support of the death penalty for blasphemy.

In Pakistan, blasphemy has been a crime punishable by death since 1991.

Blasphemy has emerged as a reason behind some of the most terrifying killings in various parts of the world lately. India, that saw such a murder as early as 1929 in the run-up to its partition, is also part of the current trend with Kamlesh Tiwari’s killing in October 2019.

The most prominent of the cases known worldwide is the Charlie Hebdo killings in France in 2015. The office of the weekly publication in Paris was attacked by a group that murdered 12 people, including staff cartoonists and two policemen. Earlier, the publication’s office was firebombed over depictions of Mohammed.

Another murder that stunned France as well as the rest of the world is that of Samuel Paty last year. The French schoolteacher was killed in October after a man — father of a girl student — ran an online campaign against Paty over blasphemy.

The girl had told her father that Paty asked Muslim students to leave the classroom as he was going to show them cartoons of Mohammed for a lesson on free speech and blasphemy.

In Pakistan, a nation carved out for Indian Muslims in 1947, at least 52 people facing blasphemy charges have been extra-judicially killed since 1992.

In India, no such data on killings over blasphemy is available.

However, along with the Kamlesh Tiwari murder, a more widely known case is that of TJ Joseph in Kerala. Now a retired college professor, Joseph had his right hand chopped off at the wrist in 2010 over a blasphemous text in a question paper he had set.

With such a backdrop, any call for beheading of a person over blasphemy, or any campaign against a person accused of blasphemy, should be seen as a serious threat of cold-blooded murder of the person. In short, a person accused of insulting Prophet Mohammed, either through words or a social media post or printed images, faces a grave risk to life, whatever the legal punishment for blasphemy in the person’s country might be.

Such murders are usually carried out to send a warning to the public. Samuel Paty’s murder was termed a “terrorist attack” by French president Emmanuel Macron.

Tiwari’s murder was said to be the first murder over blasphemy in independent India. It was no accidental or impulsive crime, but an elaborately planned exercise where the killers wanted to behead Tiwari and make a video of him to share on social media. They ended up slitting his throat and pumping bullets into his body.

Tiwari’s murder was a painful reminder of the communalism that India faced before partition when an Arya Samaji, Mahashay Rajpal, was killed by a young illiterate man named Ilm-ud-din, who went on to be honoured as ‘Ghazi’ and had roads and institutions named after him in Pakistan.

Tiwari’s murder thus should have brought about a crackdown against calls for similar murders. That never happened. The result is that we are witnessing the events leading to Tiwari’s murder all over again in the case of Narsinghanand.

This time, the campaign is bigger as a sitting MLA in the national capital is fuelling it.

Yet another murder over blasphemy in India would be a national shame. India is not a country run by Shariat law. Such murders cannot be justified even in Pakistan.

Unfortunately, the Centre and the state governments have so far been soft on those escalating blasphemy issues into life threats.

Last year, when a youth from Bangalore shared a Facebook post against Mohammed, a mob rioted in the city, burning down public and private property. Months later, a massive rally was carried out in Bhopal with ‘sar tan se juda’ slogans. The Madhya Pradesh government booked the participants only for Covid-related violations.

Thus, it is not a surprise that far from being tamed, Amanatullah Khan has made his campaign against Narsinghanand only shriller, and continues to trigger passions around it.

The slogans in Bareilly were raised in the presence of police.

Pressure for blasphemy law in India

If left unchecked now, the issue of blasphemy could turn into a major rallying point across India and lead to normalisation of violence and killings over it. Religious bodies are already demanding a Pakistan-like law against blasphemy in India.

Amid the dangerous campaign being run against him, Narsinghanand has said that he sees it as an opportunity to die for his dharma and considers it a blessing.

Narsinghanand might be prepared for the brutal consequences of his words, but that reflects very poorly on the law and order of the country.