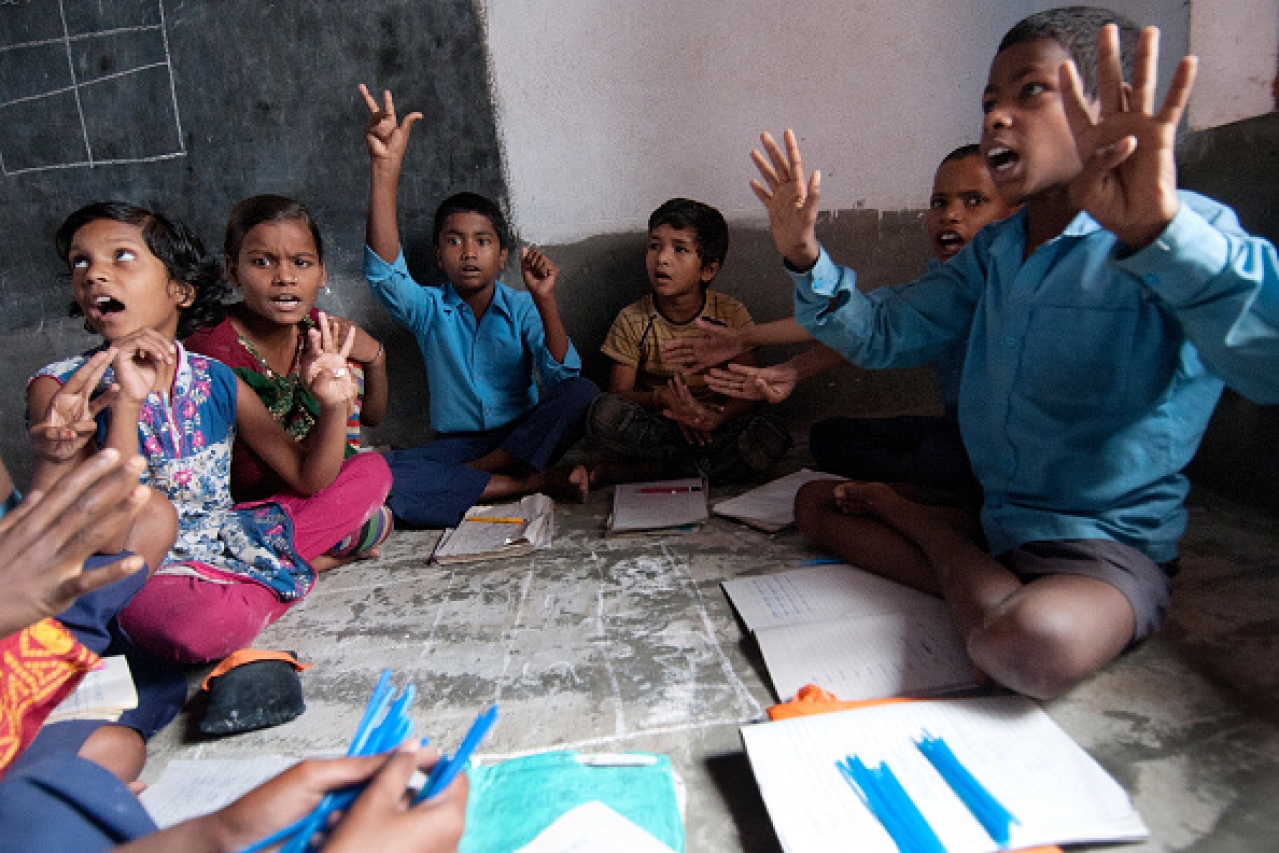 School children during a class at a school in Bihar (Sneha Srivastava/Mint via Getty Images).

India’s education sector is hobbled by an ideological commitment to the antediluvian ideas of the Nehruvian age, and electoral compulsions that gave us “the dictatorship of the salariat”, putting the interests of the salaried teaching class above that of the students. This meant that government schools attained commanding heights in the school system. But while the outlays for these public schools kept increasing, their outcomes touched new lows. The Indian state kept throwing money at failed government schools, doing the same thing again and again, while expecting different results.

The aspirational middle class, which the 1991 liberalisation created, had little patience for the very ideas that had kept them poor for decades. The resultant mass exodus of students that began in the early 2000s from government schools to private ones hasn’t stopped. Even the poor have abandoned the so-called public schools in hordes in the past one decade.

Research by Geeta Gandhi Kingdon shows that “the total enrollment in government schools between 2010-11 to 2014-15 actually fell by 11.1 million students, whereas total enrollment in private schools rose by 16 million students over the same four-year period.’ Anyone who has lived in the countryside can testify to this change. My school, which was in the city, started a cab service in 2002 to our village. It was the first school to do so. Today, more than 20 schools provide transport facilities to the same village.

While India moved forward, policymakers remained stuck in their centralisation project. The right to education (RTE) act passed in 2009 didn’t leave any stone unturned to tame the rise of private schools that catered to ‘New India’. But the march of privatisation continued despite onerous regulations thanks to inability of the weak Indian state to enforce the law. Small mercies.

It is in this light we have to see the draft national education policy (NEP) released recently. One must commend the members of the committee for the refreshing honesty with which they lay bare the rank failure and hypocrisy of India’s statist education policymakers. Sample this:

On the one hand, we want our education system to develop citizens who are responsible, creative, autonomous, independent, and humane, and creative; and on the other, the regulatory and governance culture is sclerotic and disempowering.

As opposed to the centralised approach that we have followed for decades, NEP advocates taking the pluralist route allowing schools more freedom in setting curriculum, deciding pedagogies, setting fees, hiring teachers, and critically, in lessening the regulatory load as well as making it easier to start new schools.

Let’s discuss the diagnosis of the current system as done by the NEP committee. It lists three issues plaguing the sector:

First, the present structure of governance of school system concentrates power in Department of School Education (DSE) as borne out by the fact that all main functions — provisioning, regulation and policymaking — are carried out by this body, which creates conflict of interest.

Second, NEP states that while the stifling and ineffective regulatory regime has not been able to stop commercialisation of education, it has managed to discourage public-spirited private schools.

Third, private and public schools are regulated differently, which has created an asymmetry.

To usher in a new approach to school governance, the NEP recommends the following.

a) Policy-making and operations of public schools is taken care of by the Department of School Education, which means that it loses all its regulatory powers.

b) The regulatory power is transferred to a new body — a State School Regulatory Authority (SSRA), which will set “basic and uniform standards for both public and private schools”. NEP emphasises that the current inspectorial approach is replaced by an open disclosure approach, where schools make all relevant information public to help parents make better choices thus making them the de facto regulator.

c) All academic matters is handled by the State Council for Education, Research and Training (SCERT), which will also set standards for quality assessment and accreditation of schools.

What is interesting here are the principles that NEP has suggested for accreditation: only basic parameters meeting safety and security need to be fulfilled. Infrastructure requirements won’t be uniform everywhere but will depend on local conditions.

Schools will have to just meet the most basic criteria to open or run a school. Any other parameter may be proposed to improve learning outcomes for schools but these “will have no bearing on the schools’’ regulatory status.” This, apart from proposed changes in the onerous RTE act (discussed in detail here), are a shot in the arm for the private education sector.

Schools to choose own curriculum aligned with NCF, SCF

NEP bats for giving full freedom to schools to choose their curriculum or even develop their own as long as it is aligned with National and State Curriculum Framework (NCF 2020, SCF). This will give schools the opportunity to experiment and tailor their syllabus as per local needs. Discarding of one-size fits all policy is a welcome change.

NEP states that both private and public schools will be regulated within the same framework and “the loading of regulatory requirements only against private schools should end.” This is significant because, as we have seen with the RTE act, the government had put such stringent criteria regulating private schools that even most public schools do not meet, sending a wrong signal that private schools are being targeted unfairly.

How level-headed NEP’s approach towards private entities is can be understood from its suggestion on improving diversity. Though it admits that private schools have become less diverse over time, it cautions against forcing them to induce diversity. “Giving schools the autonomy to do the right thing, and to innovate, is in general the better way to encourage best practices in schools,” it states.

Of course, it goes without saying that the draft policy is not perfect. There are a couple of issues where the NEP could’ve been bolder.

For instance, it states that all schools must be not-for-profit and that they can’t increase fees that can’t be justified. NEP wants the SSRA to decide the percentage fee increase permissible (based on inflation, etc.) every three years. This is a regressive move. Financial autonomy is one of the most important aspects of school autonomy and giving the power to decide permissible fee increases to a government body amenable to political pressures will inevitably make private schools a victim of electoral populism.

The better way is to allow both for-profit and not-for-profit private schools and give more financial autonomy to the latter. It’s not the case that private schools don’t make a profit but they do so using nefarious ways and exploiting loopholes. The government can rather tax them and it would be a win-win for both.

While one agrees with the committee that there is large information/power asymmetry between schools and students/parents and that the latter needs to be protected from arbitrary behaviour of some schools — but placing the power to control them into hand of state bureaucrats is hardly a solution. If the past is any indicator, genuine entrepreneurs will find it hard to invest in new areas and increase fees while the crooked will be able to “justify” their fee spikes by using their old ways.

The draft policy could’ve also been innovative in allowing schools to hire the kind of teachers they need, suggesting to give them more freedom in admission autonomy, relaxing student-teacher ratio, and advocating for entrepreneurs to not just experiment with different kinds of schools but also different kinds of boards.

Nonetheless, we should not make good the enemy of the best. And certainly not when NEP has done such a great job. It deserves two-and-a-half cheers out of three.