No One Can Stop Me From Worshipping Lord Ayyappa: BJP Pathanamthitta Candidate K Surendran 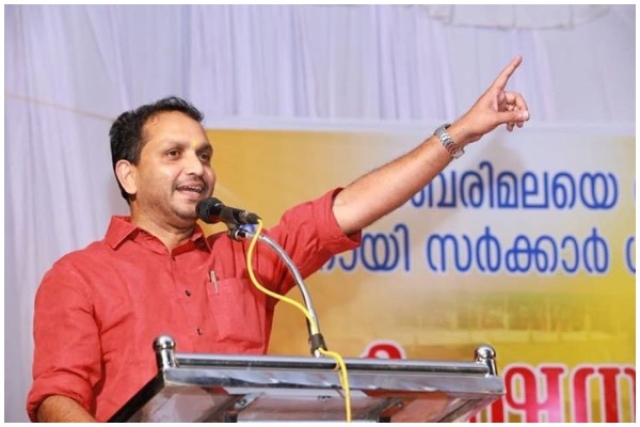 Pathanamthitta is one of the Lok Sabha constituencies in Kerala where the Bharatiya Janata Party (BJP) hopes it will be able to win. K Surendran, the party candidate, is going all out to try and wrest the constituency for the BJP.

Pathanamthitta is a hilly constituency comprising seven Assembly segments with villages that are far flung. This means the candidates have to be on their feet visiting each and every corner of the seat.

With hardly 10 days to go for polling, Surendran is busy with his hectic campaign criss-crossing the constituency. Still, he took out time to respond to a few questions that Swarajya posed to him.

We hear that you will be visiting Sabarimala on Vishu (15 April). There are objections from organisations like the DYFI on your visit. How do you justify your stand to visit Sabarimala at this crucial juncture? What will you do if the election commission objects? What is your objective in visiting Lord Ayyappa now?

My decision to visit Sabarimala has nothing to do with elections or politics. I have been a lifelong devotee of Lord Ayyappa. On the auspicious occasion of Vishu, I am going to pay respects to my beloved deity. I cannot understand why someone would want to object to me visiting Sabarimala. I am a devotee not a terrorist! This is a malicious attempt by the Kerala government and communists to purposely create problems for devotees like me. No one can stop me from seeing Ayyappan.

The State government has filed 263 cases against you. And these cases have been filed in various courts across Kerala. How confident are you of facing these cases? What is the Pinarayi government's game plan in filing these cases, especially the 243 after you filed your nomination?

During my last visit to Sabarimala, I was arrested at Nilakkal for no reason. I was remanded to custody for over 20 days. Later, I was declared as the Pathanamthitta candidate and I filed my nomination. In a matter of two days, the Kerala government, led by Pinarayi Vijayan, filed an affidavit in the high court stating that I had over 240 cases against me. I had to resubmit my nomination based on these insubstantial charges.

Let me tell you in detail about how the ruling party tried to orchestrate this entire episode.

A case was filed against me at 10 am in Kasargod and in less than an hour, another case was filed against me in Thiruvananthapuram, another in Kozhikode, Kochi, Thrissur and various other parts of Kerala. How is it possible for a person to be charged in so many cases at so many different places at the same time? This in itself is a record. There is no doubt that the ruling LDF did this to get my nomination rejected. But we were successful in thwarting those attempts. All cases against me will be quashed as there is no truth in those charges.

How do you see the trend in Pathanamthitta? Are you seeing a good support because the people here think you have been wrongly imprisoned for 20-odd days?

I have a clear vision for Pathanamthitta. Sabarimala is the focal point of Pathanamthitta. Most of the economy and activities are centred around it. When voted to power, my first priority will be to develop this temple district. Much needs to be done and I am confident that I can deliver. The people here have known me for decades. I am certain they will support me and help me win.

When the Kerala government forcefully tried to implement the court order, people came out openly to protest this attack against tradition. Women were at the forefront of this agitation standing and watching the developments. The Communist government, unable to appreciate the sentiments of the people and riding high on an ego, resorted to violence. Women and children were assaulted along with the men folk and jailed without any thought. People watched as their loved ones were beaten for defending their faith. This has deeply entrenched itself in the minds of the women.

I have always maintained that women are the bearers of our culture. It is our mothers who are our first teachers. Their trust has been betrayed. In me, they see a son, a brother who will stand along with them and shoulder this responsibility of preserving the culture and tradition.

Your primary opponent, Anto Antony, has been the MP for 10 years. How do you see his tenure as Pathanamthitta MP in the last 10 years?

Anto Antony is a two term MP of Congress. For argument sake, let us say during his second term the NDA government was inimical and unhelpful. Let him list his achievements in the first five years when UPA was ruling. Has he brought any infrastructural development to this district? Is there any new project or industry that he can claim credit for? He should present his report card to the people of Pathanamthitta. Let them see for themselves.

Unemployment in Kerala is real . It needs to be addressed in a systematic manner. Our government is committed to the welfare of development of people. We have proved it in the last five years. Prime Minister Modi has shown the way. All we need to do is to be accountable and follow a development agenda.

What is your assurance to the people of Pathanamthitta if you are elected the MP? We hear you are assuring to help in the tribals development. Can you kindly elaborate on this?

As mentioned earlier, I have a strong vision for the development of Pathanamthitta. But, let me make it clear from the very beginning that culture and tradition, unique to this place will be preserved. There will be absolutely no compromise on it.

Pathanamthitta is a microcosm of India. People of various backgrounds live here. There is a sizeable tribal population who have resided here for generations. We are firm in our resolve for their welfare. We don’t want a repeat of another Attapadi model here.

Regarding developmental projects, we will be taking the locals into confidence and prepare a blueprint for this district.