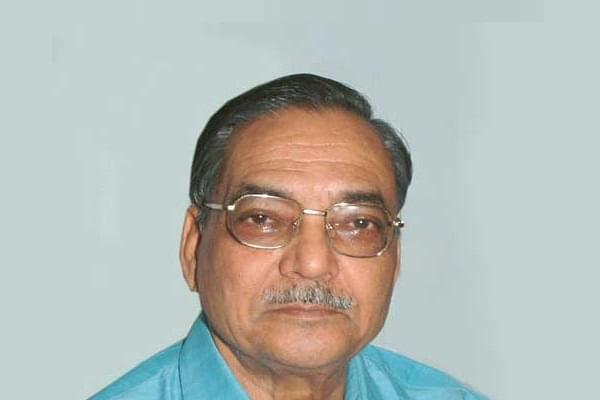 Sharad Joshi, the man who campaigned ceaselessly for economic freedom for farmers, is no more.

2015 has not been a good year for the liberal movement in India. Death took away two stalwarts this year, two people who battled tirelessly against socialism till age forced them to slow down and ultimately stop.

Sharad Joshi, the man who campaigned ceaselessly for economic freedom for farmers, died this morning, seven months after his comrade-in-arms S. V. Raju passed away in May. The two of them launched a pincer attack on a law that makes it impossible for liberal parties to get into state legislatures or Parliament – the Representation of the People’s Act provision that makes it mandatory for political parties to swear to uphold socialism.

But that’s jumping the gun, Joshi and Raju came in touch with each other only in the mid-nineties. By then Joshi had earned a formidable reputation as a farmers’ leader with a difference.

Born in 1935, Sharad Anantrao Joshi’s initial years were far removed from the rural areas of Vidarbha in Maharashtra that was to become his work arena forty years later. He studied commerce in Mumbai’s Sydenham College, taught economics for a while and joined the Indian Postal Service in 1958. After a ten-year stint there, he served another ten years in the International Bureau Universal Postal Union, Bern. In 1977, still in his early 40s, he gave it all up to return to India and start farming.

This was not an urban Anglophile’s whimsical yearning for a bucolic retreat. According to Sanjay Panse, a chartered accountant who has worked closely with Joshi since the early eighties, Joshi, during his stint abroad, often encountered Indian delegations to the United Nations pleading for aid for agriculture. He was distressed at what he felt was India begging for alms and he wanted to know why it was happening. But Joshi, according to Panse, never liked relying on just bookish knowledge. He always believed that experiencing a situation was the first step to understanding it. Besides, his UN job was not giving him job satisfaction. Hence his decision to start farming in Chakan near Pune. This gave him a first-hand understanding of what it was to be a farmer in India. In 1978, he set up the Shetkari Sanghatan, a farmers’ organisation.

Joshi first hit the headlines during the 1980 onion price crisis. Prices skyrocketed and the government banned onion exports. He organised a rasta roko by farmers on the Nashik highway – apparently the first such agitation in Maharashtra – and they dumped onions on the highway which remained blocked for several days. Joshi’s point was simple – farmers must get a remunerative price for their produce. He then took up the cause of sugarcane and cotton farmers and milk producers, organising agitations that proved effective. He had, recalls Panse, a knack of knowing how to make agitations successful.

But Joshi’s agitation for, and arguments in favour of, remunerative prices was different from that of other farmers’ leaders who only pressed for higher prices. For Joshi the issue was inextricably linked with the fact that agriculture was the most regulated activity in India. He wanted farmers to be free from socialist controls and protection. As Barun Mitra of Liberty Institute, who has worked with Joshi on BT cotton notes, other farmers’ leaders only wanted higher prices but not free markets.

But some of his positions – an absolute no to income tax on agricultural income, support for loan waivers, waiving off electricity dues of farmers – appear contradictory to this demand. For him there was no contradiction. If the government was not going to free agriculture from socialist controls, then all this was necessary. In an article he wrote for Swarajya earlier this year, perhaps the last article he ever wrote, he said: “Besides, if farmers are unable to repay their loans it is because of anti-farmer, price-depressing measures of the government.”

So Joshi’s apparent contradictions were not, in fact, contradictions; there was sound logic behind them. He was, says Panse, always very clear in his mind about his arguments. “I may be wrong, but I can never be confused,” was Joshi’s favourite quote, according to Panse.

Joshi believed farmers were wise and capable of making their own decisions and didn’t need socialist and paternalistic mollycoddling. This came through in the stand he took on introduction of BT crops – he was firmly supportive of the move, in stark contrast to many farmers’ organisations. His argument, says Mitra, was simple – it is the farmers who should have the final say on whether or not they want to use BT crops, why is everyone else deciding for them?

The Atal Behari Vajpayee government appointed him as the head of a Task Force on Agriculture, but its report, which was in line with Joshi’s thinking, never got implemented.

Joshi was also exercised by the land acquisition laws in the country which he believed gave a raw deal to farmers. In 1997, he organised farmers to start a company, Bhama Construction (which is what put Panse and him in touch) which worked out innovative ways of compensating farmers for land acquired. Unfortunately, politics put paid to this initiative.

In the mid-nineties, Joshi toyed with the idea of starting a political party espousing the cause of free markets, in the mould of the Swatantra Party. He realised that policies will need to be changed and that getting into the legislature was, therefore, necessary. That is what brought him in touch with Raju, who was keeping the Swatantra Party, Maharashtra alive. Both of them were disappointed that the 1991 reforms were not really making much headway in terms of giving the country economic freedom. Raju gave a lot of support to the formation of Joshi’s Swatantra Bharat Paksh. It was when they tried to get their respective parties registered that they came up against the RPA hurdle and decided to fight it.

Joshi helped Raju draft the writ petition that the latter filed in the Bombay High Court challenging the provision. When that went nowhere, Joshi during his stint in the Rajya Sabha from 2004 to 2010, moved a private members bill to amend the RPA and get the requirement of swearing allegiance to socialism removed. But that too didn’t meet with any success, though Joshi’s speech in the debate on the bill made a compelling case for it.

Some of the political choices that Joshi made – tying up with the BJP to get a Rajya Sabha seat during the Vajpayee regime, negotiating with the Aam Aadmi Party – puzzled some of his ardent fans. But Joshi was always working to a plan and perhaps there was a larger scheme behind this. Joshi is known for fighting for economic freedom for farmers but not many know of his fight on behalf of women farmers. He set up the Shetkari Mahila Aghadi, focussed on giving women farmers property rights. Panse recalls the Lakshmi Mukti programme that Joshi initiated which saw large numbers of farmers making out titles in their wife’s name. The agitations he spearheaded saw women participating in droves. His concept of women’s empowerment, says Panse, was radically different from that of the mainstream feminist movement. He strongly opposed the bill to reserve seats for women in state legislature and Parliament and in fact was the sole Rajya Sabha MP to vote against the bill.

Joshi was not in the pink of health for some years now, but that didn’t stop him from testing the limits of his physical strength. Even in 2014, he led a farmers’ rally, at 79 years of age, he led a rally to the chief minister’s residence in Nagpur. But age and ill health finally took their toll. And India has lost one more strong liberal voice.