Of Sen And Insensibility 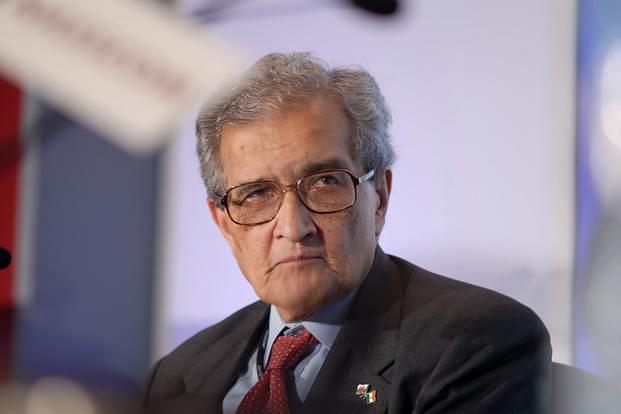 After eight years of mentorship, and after waxing eloquent about his role and vision in the revival of Nalanda, all that Prof. Amartya Sen and his academic clique have to show are a few paltry aesthetic nonentities in terms of buildings.

When earlier this week, Professor Amartya Sen suddenly spluttered and lamented the habit of political intrusiveness in Indian education, he conveniently skirted – as has been his habit in the past eight years when asked questions on the achievements of the Nalanda University – some very crucial facts. It may useful to start by looking at these. Prof. Sen, for example, failed to acknowledge the fact that he and most other members of the Nalanda University Governing Board were, in fact, associated with the project simply because of their political connections or, due to their intellectual affinity and political proximity to certain sections which were in power.

It may be argued that Prof. Sen himself, though no real scholar of philosophy or Buddhism or even, for that matter of education, was asked to head the Nalanda Mentors Group and become chancellor because of his close political affiliation to the then Prime Minister, and to some of the bosses of the ruling Congress. Prof. Sen’s protégé, whom he chose to select as Vice Chancellor of the proposed University, was herself selected not because of her academic achievements or standing, but more because of her politically-academic proximity to Sen and to his politics. Same for the other members of the Mentors Group. Not one of them established scholars of Buddhism, ancient India or education, were all chosen because of their political world-view, political beliefs or simply because of the fact that they happen to be politically aligned at that point of time, i.e. in 2007, with the then ruling UPA-1; especially, the Congress and its dominant supporting coalition partner the Communists.

A look at some of these personalities and their affiliation reveals a deep political-education connection, with Prof. Sen at the centre as mentor and master. Historian Sugata Bose, presently a Trinamool Congress member of parliament from Bengal, was chosen not only because he was a Sen acolyte, but also because he predominantly identified himself with the Congress brand of politics and because of his own mother’s association with the Trinamool Congress. Prof. Tansen Sen was also chosen because of his political belief – which is comfortable in promoting a Left of Centre reading of Indian civilisation and also readings that primarily attribute civilisational contributions in the region to the Chinese.

In fact, if, as is sometimes pointed out, the objective of the Nalanda University project was to essentially stand up to China’s monopoly of Buddhism in South and Southeast Asia, and slow down or counter her efforts at reinstating it within a newly evolving civilisational narrative, then the choice of Prof. Sen and his academic disciples was a retrograde one. Not only did the Governing Board under him fail to evolve a formula, or plan of action on a wider international scale of projecting India’s epochal civilisational role in the evolution and propagation of Buddhism in the region, it also, and by deliberate design, kept away genuine scholars of Buddhism and Buddhist studies in India and encouraged the monopoly of the entire project by an interested section which has, in any case, always displayed an allergy towards allowing a greater Indian role in the entire project and displayed a peripheral interest in allowing the project to really take off.

For those in the know, one would hardly expect the likes of George Yeo, Tansen Sen, Sugata Bose and Prof. Sen himself to be able, or willing, to draw a civilisational, cultural, and educational strategy whose sole object would be the projection of India’s past and future role as a civilisational state. These incapacities and prejudices were overlooked simply because of Prof. Sen’s political loyalties and leanings as it was in the case of those he chose to promote out of turn and out of quality, if one could put it that way.

But Prof. Sen’s habit has always been to indulge in false intellectualization and obfuscation. For him, the term “international” has essentially come to mean the self-arrogated right to indulge in academic nepotism and to bypass and flout established educational and administrative norms of the land, all in the name of preserving academic autonomy. Such is Prof. Sen’s affinity, and so habituated is he to function within the Western paradigm and framework of education and theories, that he finds the Indian education system today a “colonial” one, while the British system appears to him to be a liberated one – where, as he indicated himself, he is allowed to wield unfettered and unquestioned educational authority. One may however question whether that is truly as it should be or is it a partial and selective assessment of a very exacting and closely monitored system.

Whenever, at regular intervals, conscientious officers of the Ministry of External Affairs, or the Parliamentary Committee on External Affairs, or other academics or citizens have called for accountability from the Governing Board of the Nalanda University, Prof. Sen has gone into a sulk and thrown up accusations of interference and control. Insiders in the MEA with knowledge of the entire project since inception point out how livid Prof. Sen would get whenever suggestions were made that the MEA, the principal funding ministry in this case, should depute its officers to monitor the progress of the effort and also be part of the Mentors Group/Governing Board.

One senior former diplomat recalled how Prof. Sen opposed and tried to prevent Mr. N.Ravi, then Secretary (East) in the MEA from being part of the Mentors group. As late as February 2014, the then NSA is said to have expressed concern at the undue privileges being enjoyed by the Governing Board and had called for evolving certain regulatory mechanism since the Government of India was in reality funding the entire mega project. Prof. Sen’s political connections stood him good stead on such occasions – and the NSA’s observations were relegated to the background or overruled.

Despite his professed international stature and connections – the severance of which, one of his most ardent acolyte, Tansen Sen, argues shall plunge the reputation of Indian education and academia in the nether depths, as if India’s international reputation revolved solely on the sentiments of the venerable professor –Prof. Sen has completely failed in his promise to attract respectable amounts of foreign donations. Apart from the Chinese and the Thai no other countries have come forward to get involved or to proffer resources for the regeneration of Nalanda. Nor has Prof. Sen advised the Government of India on how to get these other civilisational partners involved. Except for keeping the entire project hostage to a globe-trotting, conference hopping coterie of academics who have themselves no deep understanding or involvement with the Nalanda tradition, Prof. Sen has little to show in terms of achievements.

After eight years of mentorship, after regular meetings, most of which have been held at foreign locales to supposedly discuss the progress of the project, and which, between 2007 and 2009 cost the Indian government and taxpayer an amount of Rs.1,71,11,303 to be precise, and after waxing eloquent about his role and vision in the revival of Nalanda, all that Prof. Sen and his academic clique have to show are a few paltry aesthetic nonentities in terms of buildings. So nominal has been the progress in terms of construction and giving physical shape to the university, leaving aside the creation of an intellectual space, that the university’s inaugural session had to be launched from a pre-existing convention centre. More than a reflection on the Government of India – these scant physical manifestations are a telling commentary on Prof. Sen’s capacity for academic leadership and direction.

Irregularities galore remain on the front of faculty and administrative recruitment, all of which is being done in violation of established academic rules and precedence. The Governing Board, with Prof. Sen on the throne, has emerged to be a self-perpetuating, unaccountable and irresponsible entity which, while thriving on the largesse of the Indian system, deems it below its standing to be accountable to it and has stoutly rejected all calls and entreaties for accountability and for auditing its performance in meeting the demands of its academic mandate.

After all, Prof. Sen had occasions in the past to demonstrate his academic acumen and to implement his visionary theories. When Tagore’s dream institution Visva-Bharati was sinking into a deep morass of cynicism, corruption and directional diversion, especially in the heydays when Prof. Sen’s ideological comrades ruled the proletarian paradise of West Bengal and his political friends and affiliates where in power in Delhi, it would be pertinent to ask what he did to salvage or arrest the decline of such an institution which had nurtured him, where his late mother served or his grandfather, that classical scholar and Tagore’s collaborator Acharya Kshitimohan Sen, produced some of his lasting work?

An involvement would have demanded time, energy, commitment and more importantly a staying back in the uncertain heat and dust of India, Prof. Sen would have none of that. It is one thing to be labeled as a towering intellectual of Bengal, to go around Kolkata during its mild aroma filled tropical winter and lecture on the need for dialogue, tolerance, empathy and be interviewed in a cosy studios full of crooning crowds. It is altogether another ballgame, and requires a different mettle to dedicate oneself to salvage Bengal, to salvage Visva-Bharati and to revive a mighty legacy or a tradition. Prof. Sen has neither the mettle nor the determination that such an intellectual recovery demands. Moreover all that which does not provide an instant international tag or limelight has hardly ever had any attraction for him.

Reviving the Nalanda University, restoring it to some of its past stature requires a deep and intrinsic attachment to the civilisational idea of India. It asks for a deep and unalterable commitment to re-inventing and re-igniting that idea and to coalesce it with present national aspirations and future directions. Parasitical and self-obsessed intellectuals with an addiction for self-perpetuation can hardly be called upon to make the sacrifices which such a re-invention demands; Prof. Sen’s life and academic legacy is a stark example of such incapacity.