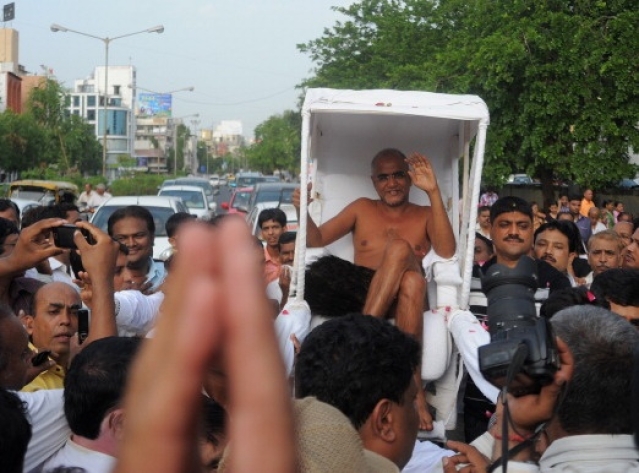 Muni Shri Tarun Sagar Ji Maharaj, the Digambar Saint, is carried naked as he blesses the devotees on his arrival in Ahmedabad (SAM PANTHAKY/AFP/GettyImages)

On 26 August, Jain monk Tarun Sagar addressed the Haryana assembly. The Digambar monk (Digambars reject clothing) talked about many issues, ranging from female foeticide to Pakistan. But many intellectuals and media persons found it ridiculous that a nude monk was given such a platform to talk about the country’s problems.

This is not the first time that the nudity of a Jain monk has been ridiculed in the public discourse of this country. In 2006, the picture of the then president Dr APJ Abdul Kalam, bowing before the naked Jain monk, went viral. Then, it was mostly through email even as some magazines ridiculed Indian society—a rocket scientist bowing before a naked obscurantist?

That happens only in India, they said, and laughed.

Long ago, puritan Jain monks were ridiculed for their perceived obsession with non-violence that often drove them to extreme penances. During the Saivite revival, the seventh century saint Thiru Gnana Sambandar mocked what he considered to be the Jain negation of life and their dry, intellectual arguments. Latter Saivite legend has it that Jain monks made the Pandya king impale them when they were defeated in a debate by Sambandar. However, there is no inscription-based evidence for this Saivite bravado and the meticulously kept Jain records do not have any evidence of this gruesome event either.

But we do know that it was through the Bhagirathic efforts of the venerable UV Swaminatha Iyer that the lost Jain Tamil literature, “Jeevaka Sinthamani”, was published and his endeavour received support from the Tamil Saivite Mutt. History shows us that all the sectarian conflicts, even while turning bitter, never became full-scale holy wars. Often, the divinity of the “other” sect was recognised. Even Sambandar who was at the forefront of leading Saivite revival against the Jains declared that even the Jain and Buddhist sects, which reject Shiva, were the creations of Shiva. Until the Islamic invasions, Rajasthan was a flourishing centre for Jains. Babar in his autobiography informs the readers how he was offended by Jain idols and had his soldiers mutilate them.

It is interesting that Jainism flourished among one of the Hindu groups that provided the staunchest resistance to Islamist expansionism. Down south, the Jains were protected by the Hindu empire builders. In the Vijayanagara empire that stood as a bulwark against the Islamist invasion, its founder Bukka not only declared Jainism as a sect that enjoys equal privileges with other Hindu sects like Vaishnavism and Saivism but also stationed for protection a state squadron at Shravanabelagola— a great Jain pilgrim centre. Incidentally, it was a Jain— Raj Chandra— who reinforced Gandhi’s faith in Hinduism asking the latter to read patiently and more deeply of Hinduism instead of getting swayed by missionary proselytism.

The ridicule piled on by the Dravidian movement on Jains

In Tamil Nadu, the cadres of the Dravidian racist movement had often attacked Digambar Jain monks. On many occasions, the local Hindu outfits had to intervene and provide protection for these Jain seers. At one level, the Dravidian Marxist narrative wants to use the Victorian morals-based colonised Indian psyche to form an aversion to Hinduism based on such concepts like nudity, etc. Thus, the “nude monks” squarely belong to the “irrational, barbaric obscene Brahminical” culture of Hinduism. At another level, they also claim that the “Aryan upper-caste Brahminical forces” violently massacred and destroyed “rational egalitarian’” Jainism.

Both the claims are the result of gross cultural illiteracy. Recently, a famous Tamil writer had to retract his accusations that the Hindutva cadre attacked Jain monks after he was presented with evidence to the contrary. There is an interesting aside to this. The original demagogue of Dravidian racism, EVR, stood naked with nudist club members when he visited Nazi Germany. When these photos surfaced in Tamil Nadu, there was a lot of heartburn among the Dravidian groups, and they even started making some spurious claims that EVR was in the same state of consciousness as the Digambar monks.

But at the time of EVR’s visit to Germany, the nudist movement had the support of the Nazis for racist reasons. (See for example: ‘Naked Nazis: Book Reveals Extent of Third Reich Body Worship’, Spiegel, 16-Jun-2011) Incidentally, EVR’s magazine had published a pro-Nazi editorial asking the Brahmins to learn from the fate of Jews in Germany. It will not be surprising if the Sheldon Pollock School of Indology starts talking about the “deep Jain” roots to Nazi body culture.

A commendable move by Haryana govt

In Haryana’s case, the BJP has done well to bring an Indic minority religious leader, whose religion does not believe in a “God”, to lecture the assembly. Earlier, the BJP government took a commendable step to modernise the highly patriarchal caste-ridden Haryana society by raising the state cash reward for inter-caste marriage from Rs 50,000 to Rs 1,00,000. The media silence that followed this bold move was deafening. The same old media initially smelled blood when it saw a naked seer addressing the legislative assembly in Haryana. They thought they had found a chance to label the BJP as “obscurantist” and “anti-secular.” However, much to the shock of the old media, the media environment has been democratised. In the decentralised and democratic media milieu, the retaliation came quick, and it snowballed so much so that a person close to power centres of AAP had to quit politics due to his offensive statement against the naked seer. What the old media, in their rootless ignorance, considered as an offensive visual image became the symbol of an India that shows it can break free of the Victorian moral stranglehold.

Here one needs to look at MF Husain’s much debated “nude” pictures of Hindu Divinity. The real offence is not in nudity itself. It was in making nudity a means of negative portrayal, as has been explained by Indologist Dr Koenraad Elst. Of course, there can be no denying the fact that Victorian morality was also part of at least some of the protests against the painter. And that is the reason why the Haryana legislative assembly event becomes even more important.

By making the nude seer speak at the Legislative Assembly, the BJP has given a strong statement that Victorian colonial values cannot rule over our psyche. This is an open-call to make the inherent strength of vibrant pluralism in Indian society to come to fore in modern times. The journey perhaps has just begun. Time has come for Hindus to say that nudity is no offence and that their body veneration culture is more democratic and humane than that of the West. The pot belly of Ganesha is as beautiful and adorable as the six-packs of warrior Gods, and the hag-like women Divinities are as beautiful as the hour-glass shaped Goddesses. But would that not make the Wendy Donigers of the world jobless?