‘One Of The Most Hideous Sights One Can Witness In India’. What Ambedkar Said About Women In Islamic Veil 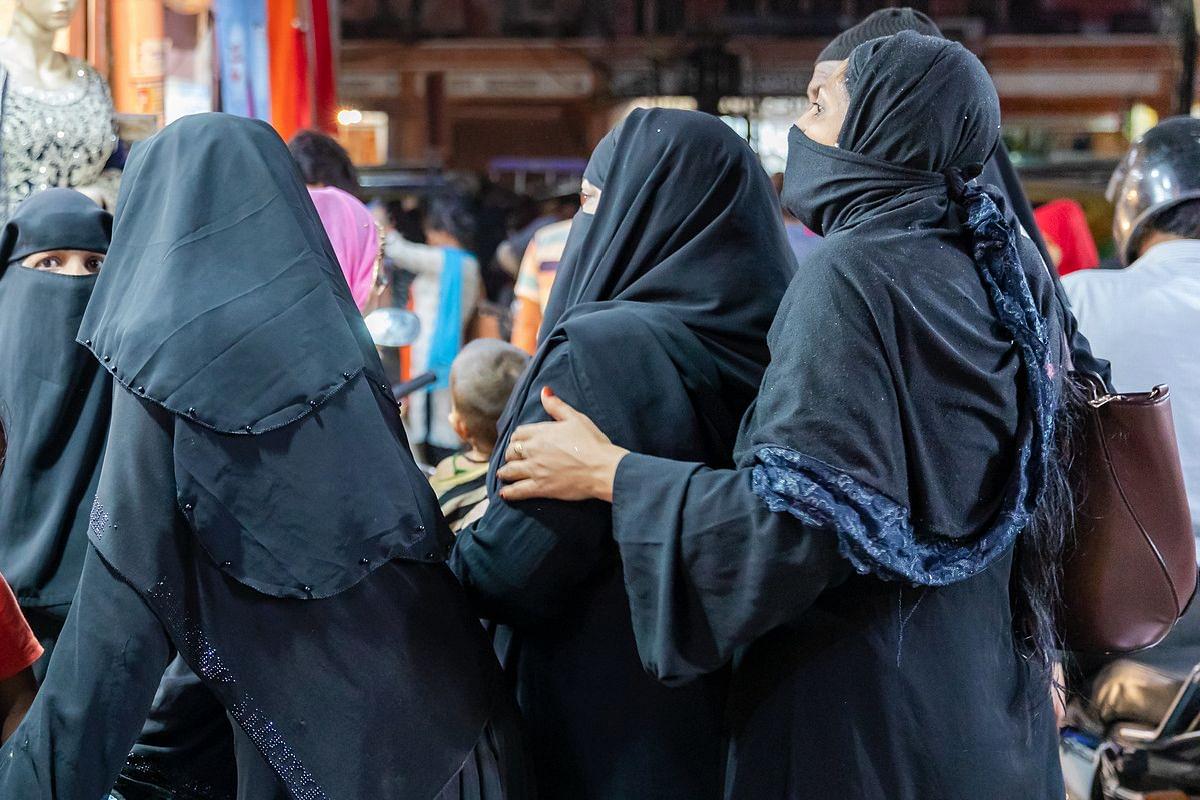 For a month now, young women in some pre-university colleges (Class11-12) in Karnataka have been protesting against administration rules prohibiting them from wearing veils to the campus.

The protests began in December when eight girls in an all-women pre-university college began to sport hijab and were denied entry into the campus by the administration. The girls defended their act by arguing that they had only recently discovered that the institute had no stated rule against hijab. They said they wanted to wear hijab as the institute has male teachers.

The protest soon spread to other colleges in the state. As per reports, at least five educational institutes in Karnataka are demonstrating pro-hijab protests now.

Protesters are calling the hijab (veil that covers the head and neck but allows sight of the face) and burqa (full-body veil barring the eyes) symbols of their Islamic faith. They say they are protesting for their right to wear the veil for, to them, it means a right to practice their religion.

At least one college has arranged for a separate room for women to keep their veils and attend classes in normal clothes, but students insist they wish to wear it at all times.

In a country that has been witnessing Hindu-Muslim conflict for centuries, which has not ceased to exist despite a bloodied partition in 1947 on religious lines, the controversy in Karnataka has triggered yet another confrontation between Hindus and Muslims.

Hindu students at these colleges – both men and women - have begun to sport saffron stoles as a mark of protest against any concession given solely to Muslim students. This competitive religiosity on campus has prompted college administrations to say that no overt display for religion would be tolerated at the campus.

The ongoing conflict could well be a case study in BR Ambedkar’s 1945 book ‘Pakistan or the Partition of India’, where he advocated the creation of Pakistan and a total transfer of Muslim population to Pakistan.

Citing several communal clashes and confrontations between the Hindu and Muslim communities, Ambedkar argued that an India with no solution to the Hindu-Muslim problem will lead to social stagnation. He wrote:

..So long as one community looks upon the other as a menace there will be no social progress and the spirit of conservatism will continue to dominate the thoughts and actions of both.

Ambedkar said that this “menace” is sure to last “as long as the Hindus and Muslims are required to live as members of one country under the mantle of a single constitution”.

Indeed, it is the conservative section of the Muslim society backing and fuelling the pro-burqa demands.

The Campus Front of India, a student group that traces its roots to the militant Students Islamic Movement of India (SIMI), is at the forefront of leading the protests even as progressive Muslim voices on social media are decrying the protests, calling the veil a “medieval symbol of backwardness, disempowerment and patriarchy”.

It is interesting here, to recall Ambedkar’s take on the veil.

While radical Islamic groups including the Campus Front of India often attempt to club the struggles of the Hindu Dalit community in their religious mission, in the pretext of forming a common front against “saffronisation”, the Dalit icon called burqa-donning women “one of the most hideous sights one can witness in India”.

This is what he Ambedkar wrote (Pakistan or the Partition of India):

On social evils, where Ambedkar questioned the propaganda that Muslims in India were a progressive people compared to Hindus

The social evils which characterize the Hindu Society, have been well known. The publication of Mother India by Miss Mayo gave these evils the widest publicity. But while Mother India served the purpose of exposing the evils and calling their authors at the bar of the world to answer for their sins, it created the unfortunate impression throughout the world that while the Hindus were grovelling in the mud of these social evils and were conservative, the Muslims in India were free from them, and as compared to the Hindus, were a progressive people. That, such an impression should prevail, is surprising to those who know the Muslim Society in India at close quarters.

On purdah or veil among Muslim women

As a consequence of the purdah system a segregation of the Muslim women is brought about...These burka women walking in the streets is one of the most hideous sights one can witness in India.

Such seclusion cannot but have its deteriorating effects upon the physical constitution of Muslim women. They are usually victims to anaemia, tuberculosis and pyorrhoea. Their bodies are deformed, with their backs bent, bones protruded, hands and feet crooked. Ribs, joints and nearly all their bones ache. Heart palpitation is very often present in them. The result of this pelvic deformity is untimely death at the time of delivery. Purdah deprives Muslim women of mental and moral nourishment. Being deprived of healthy social life, the process of moral degeneration must and does set in. Being completely secluded from the outer world, they engage their minds in petty family quarrels with the result that they become narrow and restricted in their outlook.

They lag behind their sisters from other communities, cannot take part in any outdoor activity and are weighed down by a slavish mentality and an inferiority complex. They have no desire for knowledge, because they are taught not to be interested in anything outside the four walls of the house. Purdah women in particular become helpless, timid, and unfit for any fight in life. Considering the large number of purdah women among Muslims in India, one can easily understand the vastness and seriousness of the problem of purdah.

The evil consequences of purdah are not confined to the Muslim community only. It is responsible for the social segregation of Hindus from Muslims which is the bane of public life in India. This argument may appear far-fetched and one is inclined to attribute this segregation to the unsociability of the Hindus rather than to purdah among the Muslims. But the Hindus are right when they say that it is not possible to establish social contact between Hindus and Muslims because such contact can only mean contact between women from one side and men from the other.

Not that purdah and the evils consequent thereon are not to be found among certain sections of the Hindus in certain parts of the country. But the point of distinction is that among the Muslims, purdah has a religious sanctity which it has not with the Hindus. Purdah has deeper roots among the Muslims than it has among the Hindus and can only be removed by facing the inevitable conflict between religious injunctions and social needs. The problem of purdah is a real problem with the Muslims—apart from its origin—which it is not with the Hindus. Of any attempt by the Muslims to do away with it, there is no evidence.

More than 75 years later, these writings by Ambedkar are as relevant as they were when they were originally written in the run-up to the partition.

The ongoing movement in support of the veil is an Islamic movement that is only exposing the centuries-old fissures between the Hindu and Muslim communities in India.

To the women and other marginalised sections, a conservative movement such as this does no good. As Ambedkar had warned, it’s a manifestation of social stagnation.