PM Modi Interview 7: ‘Opposition Has No Agenda Except To Remove Me’ And It Is A Recipe For ‘Chaos’ 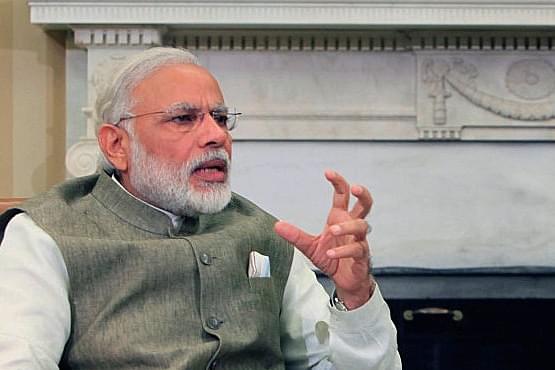 In this segment of Swarajya’s interview with Narendra Modi, we discuss the BJP’s view of the mahagathbandhan that will confront it in 2019, its expanding social base, and the issue of one-nation-one-poll. (Read the previous part here)

Swarajya: The countdown to 2019 has begun and there is a lot of discussion of a grand alliance of the Opposition. Are you worried by the formation of such an alliance, considering such alliances do tend to succeed in the short-term, as shown in 1977 and 1989?

Modi: The BJP contests elections on the issues of development and good governance.

On various parameters – economics, security, social justice, foreign policy – our government has done well. After 2014, time and again the people have blessed us in all parts of India. The mandates we have received in state after state are historic. Hence, we are confident that people will repose their trust in us.

As for a grand alliance, the mahagathbandhan, the comparisons with 1977 and 1989 are flawed. In 1977, the common motive of the alliance was to protect our democracy that was under great threat due to the Emergency. In 1989, the record-breaking corruption of Bofors had hurt the entire nation.

Today, these alliances are not motivated by national good but about personal survival and power politics. They have no agenda except to remove Modi.

Swarajya: After BJP’s single-party majority, you have lost allies. The opposition seems better at coalition politics.

Modi: The people of India must know what the Congress thinks about coalition politics. In 1998, their party met in Pachmarhi, where no less than the then Congress president Sonia Gandhi referred to coalition politics as a ‘passing phase’ and the party expressed its desire for one-party rule.

From the arrogance of Pachmarhi, the Congress is now running from pillar to post, looking for allies. They are fighting a battle for their existence, what I call an ‘astitva ki ladhai.’ This is due to the people of India, who have rejected the high-handedness of the Congress.

Every alliance needs a cementing factor or an anchoring party. Today, the Congress is like a regional party. They are in power only in Punjab, Mizoram and Puducherry. In Delhi, Andhra Pradesh and Sikkim they have no representation in the assembly. Their ‘strength’ in Uttar Pradesh and Bihar is also well known. So, who is the cementing element for this alliance?

The people of India also know how the Congress tends to treat allies. They are known to betray others, be it farmer leaders like Chaudhary Charan Singh or H D Deve Gowda, socialists like Chandra Shekhar and even V P Singh. For their selfish interests, Congress can sacrifice anything.

Swarajya: But they seem to be united right now in a grand alliance.

Modi: There is no grand alliance, there is just a grand race to be Prime Minister. Rahul Gandhi says he is ready to be prime minister but Mamata Banerjee does not agree. Mamataji wants to be PM but the Left has a problem. SP thinks their leader more than anyone else deserves to be PM. The whole focus is power politics, not people’s progress.

Hatred for Modi is the sole gluing force for the Opposition and it is not as if they have not tried grand alliances in 2014 and in the ensuing state elections. The results are for everyone to see.

How long will the dislike and mistrust these parties and leaders have for each other keep them together? They are in direct bitter contests against each other in various states like West Bengal and Kerala. The last time these parties formed a government in Uttar Pradesh (in 1993) it could not even last two years. Such instability adversely impacts the growth trajectory of our nation.

Swarajya: But they recently formed a government in Karnataka.

Modi: A trailer of what is possibly in store can be seen in Karnataka. After a stolen mandate a government was formed, but the bickering continues. You would expect ministers meeting each other to solve development issues but in Karnataka they meet only to quell infighting! Development has taken a backseat.

A non-ideological and opportunist coalition is the best guarantee for chaos. The next election will be a choice between governance and development, on one side, and chaos on the other.

Swarajya: Opposition politics will continue to evolve but when it comes to the NDA things are not looking good. In 2014, the BJP got a historic majority and the NDA got its best-ever tally but the allies are not on the same page as the BJP. Is today’s NDA a weaker NDA?

Modi: Your question is two decades late! It seems as if you are living in the 90s, when an important political question was, will Atalji get allies? Will other parties ever support the BJP? In 1996, the BJP could not form the government but under two years later, under Atalji’s leadership, an expanded NDA went on to serve India for six years.

Today, things are even better. The NDA is a large and happy family of over 20 parties. NDA is leading strong coalitions in various states of India. Which other alliance has such an impressive membership and is serving in so many states?

I want to take you back to the run-up to the 2014 campaign, when some people would ask, “Can Modi get allies at all?” The fact was, that time we had an alliance of 24 parties!

Yes, it is true that the mandate for BJP in 2014 was special. That time, we could have easily formed the government on our own. But, we did not do so and instead took our NDA allies along, made them a part of the government.

You must understand how we in the BJP view the NDA. NDA is not our compulsion. It is an article of faith. A large and diverse NDA is good for India’s democracy.

In a country like ours, it is most important to respect regional aspirations. NDA is committed to fulfilling these aspirations across the length and breadth of India.

Swarajya: Coming to the BJP, what is it doing to expand its social base? Some of your old base, like traders, were unhappy with GST. You are often seen as a Hindi-belt party…

Modi: That the BJP has a narrow social base is an old myth perpetuated by a select group of people. We were said to be a Brahmin-Bania party; then it was said that we are an urban party or that we are a north-based party. This is totally false.

Ours is a party that draws support from all social groups. Our social base is very wide. It is parties that are run by families that draw their strength only from a few social groups.

In fact, in 1984, when we won just two seats, one of those seats was from the south and the other from the west (both non-Hindi speaking states).

Since you asked me about the BJP and the party’s social base, you must study the BJP’s performance in Gujarat. Continuously and consistently we have been winning there. This time too we won with a vote share of 49 per cent. It is not usual for one party to remain in power in a state for 27 years.

Swarajya: There is a view that the BJP is weakening in the crucial state of UP where you won a lot of seats in 2014 and again in 2017 assembly elections.

Modi: On this issue you will always find two sets of views: one, the hawa is very much there. Two, the hawa is long over.

You all are veteran observers of politics. I leave it to your wisdom and develop your opinion on the subject.

I just have one anecdote to share. Before the 1998 Gujarat elections the BJP had not done very well in some of the local elections across the state. A lot of people would ask me if we will manage to win. Initially, I tried to explain the context but eventually I made a small folder containing details about the nature of the elections, our efforts there, the larger picture, etc. Whoever asked me I gave them that folder and said, you study this and them come to me.

When the elections happened in 1998, the BJP formed the government in Gujarat with a resounding two-thirds majority!

Swarajya: Speaking about elections, do you see your idea of ‘One Nation, One Election’ materialising in the near future? Why is no one supporting you on this?

Modi: First of all, the issue of ‘One Nation, One Election’ is not Narendra Modi’s idea. This is an issue that has been raised by several people, at different points of time. Eminent statesmen like Shri Pranab Mukherjee and Shri L K Advani have spoken about it. Recently even Shri Naveen Patnaik has supported the idea.

In fact, if you recall India’s history post-1947, the Lok Sabha and Vidhan Sabha polls across states were held together, which means there is also precedence for this to happen.

The frequency of polls and the manner in which they are spread out means devoting resources to keep updating it time and again, without any guarantee that this roll will be used in the poll after the one for which updation was done in the first place.

Voters have to keep checking if their names are there on the list. A common electoral roll and simultaneous polls will change this. Even the scope of errors and omissions will come down significantly.

Swarajya: What are the benefits of the idea?

Modi: As public servants, our prime role is to ensure good governance and harness the aspirations of those who have reposed faith in us. Due to elections not being held together, there is a frequently recurring campaign period along with long Model Codes of Conduct, which lead to delays in development decisions.

The entire exercise of electioneering involves lots of resources. Elections at different points of time also mean a heavy burden on the exchequer.

Elections require proper security measures to be put in place. Combined elections would mean our personnel spend lesser time on poll duty and more time in their respective states, focused on better policing and security.

It is also my view that the electioneering cycle in the current form weakens the federal structure. This is because the campaign trail that precedes an election often takes an aggressive nature and the parties at the Centre and the states are pitted against each other.

By devoting a specific time for electioneering, the subsequent post-election period becomes one of undivided attention to governance and development for all elected governments across the nation.

Thus, holding Lok Sabha and Vidhan Sabha polls together will involve lesser waste of resources and enable a healthy culture of working together in the spirit of cooperative federalism for the common pursuit of India’s progress.

I do call upon media organisations such as yours, policy enthusiasts and youngsters to talk about this subject as much as they can and also come up with effective frameworks through which this idea can see the light of day.

(For the next part of this interview, click here)