Padmavati: The Selective Outrage That Gave Us Competitive Intolerance 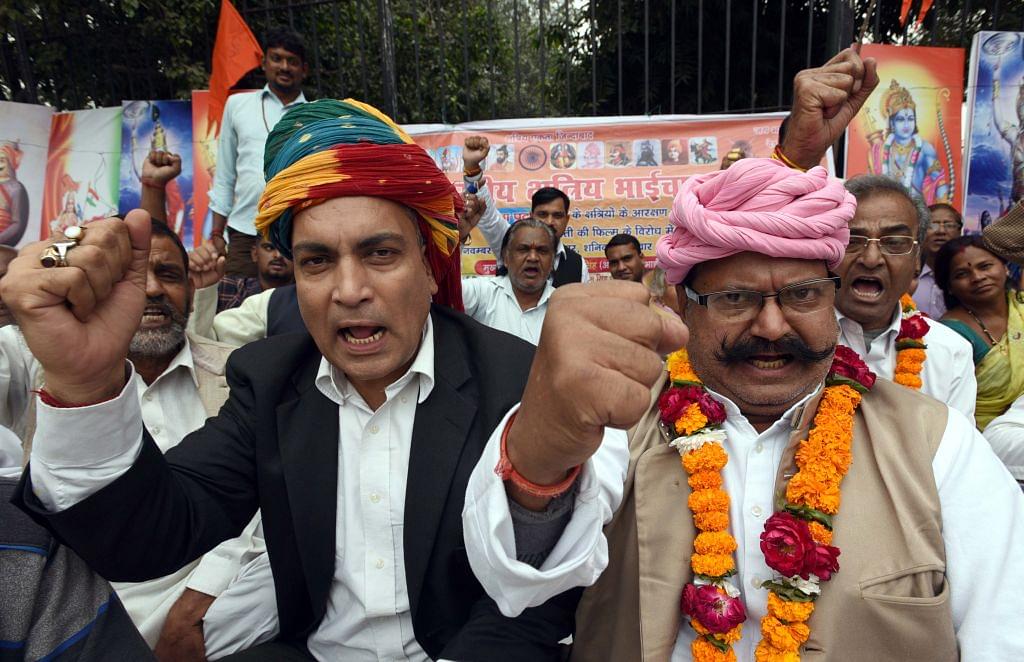 The makers of Padmavati have postponed the release of the Shahid Kapoor-Ranveer Singh-Deepika Padukone starrer film. The reason was simple. After a series of protests in different states, popular passions had started turning against the director and the actors. When the controversy first erupted, the makers must have followed the dictum that “there’s no such thing as bad publicity” and hence they didn’t give much importance to Karni Sena, despite their repeated requests to meet with them and clarify if Ranveer Singh, who is playing Alauddin Khilji, has any scenes with Deepika Padukone’s character of Rani Padmavati. Now, when the state governments have started banning the movie in their jurisdictions, the makers had no option but to defer the release.

One fringe group has put the multi-million dollar project in a soup. Members of the group have not even seen the movie but issued a diktat and rallied public opinion in their favour. Not just that, some elements have issued physical threats to the actors and director of the film. This is not acceptable. How did it come to that? The answer, whether you like it or not, lies in whataboutery.

As Arnab Ray writes, “there was a time when songs like Chal Sanyasi Mandir Mein were being made, at a time when the country should have been more religious, and yet “the intolerants” were not offended. And then over the years, the message that has been conveyed is that some people have the right to be offended, and take action, and some people don’t, some sentiments need to be respected, and some not.”

We can’t ignore the fact that the outrage from the minority communities has fuelled the competitive intolerance that has led to the situation that we find ourselves in today.

Here’s a short list of films that generated outrage from the minority communities. If Bollywood had stood firm then, the filmmakers wouldn’t have to defer the release of Padmavati today.

Christian groups protested against some scenes in the movie that hurt the community’s sentiments. The scene depicted "a dance number featuring a Catholic priest on the steps of a church while wearing a garland of lottery tickets and rosary, a live person hiding in a coffin marked with a cross, and a priest holding a bouquet of flowers bearing the message, ‘I love you’.” The Central Board of Film Certification arranged for a special screening for Christian leaders involved in the protests. The board not only removed objectionable scenes but also assured them that more caution will be exercised in future.

In this movie, a dog’s name was Fakhruddin, also the name of Congress politician and India’s fifth president Fakhruddin Ali Ahmed. The ex-president’s family and a Muslim trust raised objections to it. Also, a Christian legislator from the Congress party objected to Chunky Pandey’s character in the movie which he said showed Christianity and Goa in poor light.

As many as five states banned this movie including Punjab, Goa and Tamil Nadu, where Christians are in minority. It was banned on the premise that it hurt the sentiments of the Christian community. The film was based on the best-selling book by Dan Brown and raised question over Christian belief that Jesus never committed the original sin. It showed that Jesus had married.

Christian groups had fiercely protested Vinod Pande’s bold film Sins, which depicted a sexual relationship between a Catholic priest and a woman much younger in age compared to the priest. On the question of how he intended to tackle the ire of Christian community, Pande had said that, “in my serial Reporter for national television (Doordarshan), I had a six-part story about the underhand dealings in a religious mutt, no one spoke out. So why now? Isn't this fascism? Such intolerance for creative work is not acceptable.”

The movie starring born-again secular leader Kamal Haasan was banned by Tamil Nadu government when J Jayalalithaa was that chief minister. Muslim groups protested against the movie, for according to them, it showed Muslims in poor light. Haasan had said, "when M F Husain can do it, Kamal Haasan can do it," adding "I will have to seek a secular state for my stay.... Tamil Nadu wants me out."

This movie raised a storm worldwide with violent protests in various countries with sizable Muslim population. Hundreds were injured and more than 50 people were killed. In Benghazi, Libya, Islamists stormed the United States diplomatic compound and killed US Ambassador J Christopher Stevens and US Foreign Service Information Management Officer Sean Smith. India was also affected by the protests when the movie had nothing to do with India. Around 1,500 people from Tamil Nadu Muslim Munnetra Kazhagam and other Muslim organisations attacked the US Consulate-General on Anna Salai in Chennai.

Mamata Banerjee government in West Bengal ordered many cuts in this Bengali movie that was scheduled to be released on Durga Puja last year. Even though the movie was directed by one of her favourite directors, she allowed the censorship as All Bengal Minority Youth Federation threatened to launch an agitation against the film.

A high alert was issued in Punjab and Haryana ahead of the release of film Messenger of God starring self-styled godman Ram Rahim Singh, who is currently undergoing rigorous imprisonment. Various Sikh organisations and individuals had opposed the movie, saying its release would disturb communal harmony and law and order. A Home Ministry advisory had warned that “tension between Dera Sacha Sauda followers and Sikhs remain a potential flash point in view of the ongoing rivalry between the groups.”

Pahlaj Nihalani-led censor board had banned the screening of this film, which showed two girls in a homosexual relationship and one Muslim girl getting kidnapped by the terrorists. “They told me that Hindus and Muslims will start fighting, and that the film will also ignite ‘unnatural passion’. I was aghast as my film is not provocative,” said Raj Amit Kumar, the director of the film.

This obviously is not an exhaustive list of the movies that have been banned, censored, or snipped in the name of protecting the sentiments of a community. However, this is sufficient to make the point that the competitive intolerance that we see today is a result of too much tolerance on the side of the majority community for decades while minority communities had their way and forced the movies to be censored. Now, the majority community wants the right of their sentiments to be equally heard. Those who didn’t speak up before or even prostrated to the wishes of the minority communities have no business taking the higher moral ground.