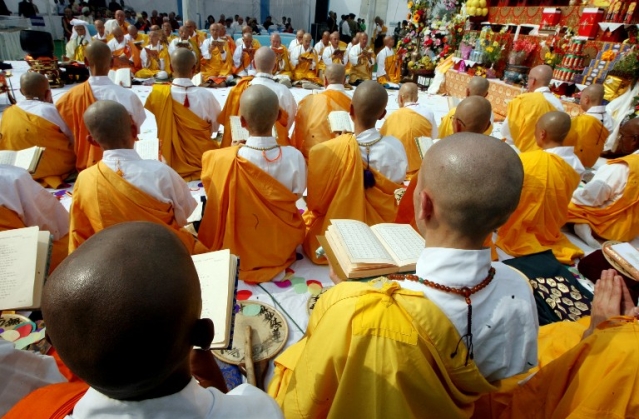 What the Pew report means for the Indic religions and their demography.

The latest report of Pew Research Center on world religions studies how religion based demography and predicts the change in it, globally, for the next four decades. It has at once triggered controversies in India. Surendra Jain, the joint general secretary of VHP and himself belonging to the Indic minority religion Jainism, demanded that government enact a uniform law to rectify the “demographic imbalance” in the country and asked Hindus to have as many children as Muslims. The Telegraph from Calcutta reported that the Hindus would be the third largest in 2050. The Hindu reported the study:

‘Hindus will become the world’s third largest population by 2050 while India will overtake Indonesia as the country with the largest Muslim population, according to a new study.’

But hidden within the report are many worrying trends for the Indic religious communities. Beyond the knee jerk reactions to the fast growing Muslim population worldwide, Indians need to look into other disturbing patterns within and around India. And more importantly, Indians need to ponder over the reliability of the data with respect to themselves.

Let us take the Asia-Pacific region. As of 2010, Hindus form the single largest religious population group in the region (25.3%) followed by Muslims (24.3%) and ‘unaffiliated’ (21.2%). However, despite increase in real numbers for Hindus, the percentage is going to change in favor of Muslims in the region. By 2050 the demographic composition will change with Muslims forming 29.5% and Hindus 27.7%. The Christian population is at 7.1% in 2010 and at 2050 it is projected to become only 7.7%.

But deep inside the report is buried a curious fact. Chapter 1 of the report states that some experts believe that China’s Christian population is growing, perhaps rapidly:

“Most notably, one of the world’s leading specialists on religion in China, Purdue University sociologist Fenggang Yang, estimates that the Christian population in China grew at an average annual rate of 7% between 1950 and 2010. At this rate, Yang calculates the proportion of China’s population that is Christian could grow from 5% in 2010 to 67% in 2050.”

Another interesting set of data is on religious ‘switching’, that is, conversion. According to the report, Muslims and Hindus gain through religious switching. Thus between 2010-2050 Muslims would have gained 61,490,000 adherents through conversion. Hindus for the same period would have gained a net adherents of 10,000. And Christianity is projected to lose 66,050,000. Clearly this will not be the case if the the Christianization of China is achieved as the report tentatively puts in its first chapter.

However what is really amusing about the Pew report is what it says about conversions in India. With regard to ‘religious switching’ in India it states:

In other words, despite the missionary groups well connected with US working in India, and despite ‘Project Joshua’ providing a detailed on-line database, despite World Vision working so meticulously, Pew feigns ignorance and data unavailability with regard to conversions in India. Pew has experts who can predict Christanization of Communist China but has data insufficiency with regard to democratic India. China is all together a different ball game. It has been rumoured for long that an influential section of Chinese politburo are favourably inclined towards Christianity despite occasional reports of official ‘persecution’.

The fact is simple: The report is not Hindu-oriented (which it need not be) and is neither non-partisan. It has a clear pro-Western pro-Christian bias. It does not want Christian conversion projects in India to get into bad press or trouble. At the same time it wants to raise the bogey of Islamic domination for Christian West. That Templeton Foundation is a partner in Pew exercise should make things clear for a keen observer of the US think-tanks and policy centres. Yet the data that has been collected by Pew is valuable as it can still be used by Hindu-Buddhists for shaping their future.

According to the report the net losers are Buddhists in the demographic race. Though the report projects Hindus as being positioned as the third largest religious group, this needs to be taken with a sac of salt because even here, the trends are clear. The percentage of population of Hindus is steadily declining, both within India (where for the first time after partition it has dipped lower than 80 percent) and in the Asia-Pacific region. The increase in Hindu population in absolute numbers with decrease in their percentage of composition in both India and Asia-Pacific region is a very dangerous situation. It will have serious negative implications for Hindus who are living in areas where they would be reduced to minorities, like in Bangladesh or Malaysia, where they may be systematically and steadily driven to extinction with the world not even murmuring in low decibels.

In other words despite occasional favourable situations like the ’60s movements and the trend in meditation researches which favour Buddhism, there is no ‘switching’ of people to Hinduism or Buddhism. The survival and growth of religions may also be tied to at least some crucial extent to more mundane, materialist correlates. It may not be an accident that both Hinduism and Buddhism have been losing their institutional land holdings over the last two centuries. In both China and Japan Buddhist land holdings have been systematically taken over by the state – a trend which can be seen in India as well. On the other hand, Christian land holdings in Asia-Pacific region have been increasing steadily. Hindus and Buddhists cannot expect a Pew or more notorious USCIRF to prepare a report on this. In the end, Hindus need to have a Pew-like study of their religion, society and its dynamics and formulate strategies as well as course correction for their future.

Ultimately, Pew is predicting a world dominated by Abrahamic-expansionist religions. Non-Abrahamic religions are here reduced to minorities in a way which may spell doom for them. Hindus and Buddhists need to explore pathways of survival in the coming clash of Abrahamic religions. For example, in 2014, Pew produced another report, limited to US, which explored the warmth each religious group felt for the other. Hindus and Buddhists scored better at warmth with atheists and agnostics (with Buddhists having an edge). Such strengths of perception need to be used by the adherents of these two religions to provide a global alternative to Abrahamic domination.