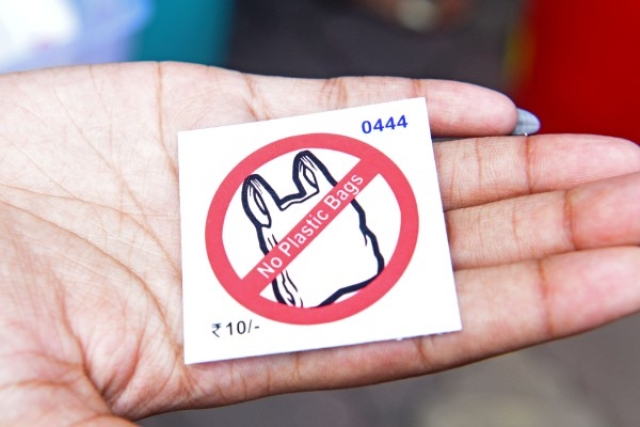 Sajjan Ram sells cotton candy at Ghaziabad's Ghanta Ghar. Last Tuesday (17 July), municipal officials turned up at his kiosk and fined him Rs 500 for covering his spun sugar treats with plastic bags. A stunned Sajjan Ram made a dash to the nearest plastic dealer for an alternative; the municipal officials had offered him none. "If I don't cover them, my candies will turn into tiny pink balls," an exasperated Ram told the dealer, who offered him thicker plastic bags. When Swarajya visited the market this week, the plastic dealer said, "The ban is only on carry bags but who will tell the officials."

Rajiv Gupta (name changed) trades in plastic packaging material in Ghaziabad's Purani Munsafi market. The same day, municipal officials turned up at his shop too. Gupta told Swarajya that the team harassed him for storing plastic, despite pleas that the government notification only prohibits carry bags of thickness less than 50 microns.

"They neither had read the notification nor were carrying a copy. They did not even have an equipment to measure the thickness of plastic bags which we only provided to them," said Gupta. When other dealers joined in the protest, the officials left.

A bakery owner in an adjoining lane told Swarajya that the irked officials landed at his workshop and took away Rs 5,000. "They told me, now that we have come all the way, you should give us something. The plastic dealers did not," the bakery owner said.

This is how a "raid" to enforce the newly announced plastic ban looked like for a busy market in a major Uttar Pradesh city.

Elsewhere in the city too, dealers recounted similar experiences. A halwai (sweet-maker) in Chaupla market said he has been using carry bags of 51 microns for two weeks and these were kept at the counter, but the team still carried out a search of his premises. They found a small bundle of the now prohibited plastic bags in an almirah and fined him Rs 2,000. "I don't even remember when I kept the bags in that almirah. Must be long ago," the trader said bitterly, and showed us the fee receipt. The receipt was for encroachment, on which the officials had simply scribbled "polythene stored" in Hindi.

Plastic banned for the second time

The ban on plastic in the state came into effect on 15 July with clearance to 'UP Plastic and Other Bio Begradable (regulation of use and disposal) (Amendment) Ordinance 2018'. Chief Minister Yogi Adityanath had made the announcement in a rally earlier in July. The new ordinance is an amendment to a 2000 legislation that banned the use of plastic but wasn't as stringent.

The ban on manufacture, transport, storage, distribution, packaging, import and export and sale of plastic, will be done in a phased manner. From 15 July, plastic carry bags below 50 microns and disposable carry bags above 50 microns not bearing the details of the manufacturer have been banned. From 15 August, all plastic and thermocol including cups and plates disposable after one-time use would be banned. From 2 October, all types of disposable carry bags would be banned.

This is not the first time that the state has cracked down on plastic. Following an Allahabad high court order in November 2015, the then Akhilesh Yadav government introduced a complete ban on the distribution, manufacture and sale of polythene carry bags of 40 microns thickness and below in January 2016. But it saw poor implementation. The ban was again reinforced in 2017 but use of plastic continued unabated. The fresh ordinance is way more strict.

Confusion on the ground

A lack of clarity on the rules has thrown markets in disarray. Most shop owners cited Whatsapp forwards as source of information on the ban. In Purani Munsafi market, shop owners have prominently displayed print outs of an Indian Express report detailing what is banned and what is not, except that the news report is of Maharashtra and not Uttar Pradesh. But the traders were blissfully unaware of this.

Traders say they welcome the ban in principle for they know plastic is devastating natural environments, but complain that the government is neither making the rules clear not has has given them any alternatives.

"If they start going after plastic packaging, there will be a crisis. Traders and road-side kiosks use plastic sleeves to cover almost everything, from popcorn, namkeen, stationery to tools. Many products won't survive long without plastic in rains and extreme weather," said Yogesh Gupta, who deals in packaging material and is president of Purani Munsafi market. "They aren't telling us what to do. We have met everyone from the district magistrate to municipal heads. In private, they agree that we are helpless but in public they raid our shops like we are criminals," he said.

Gupta also blamed the government of only going after small traders and not touching either the big traders or giant manufacturers. "As far as we know, nagar nigam did not even go to showrooms. And what about packets of chips, milk and gutkha?" he asked.

Naresh Arora, member of the association, said that the government cited cows eating plastic bags as a major reason for their move, but the ban won’t stop it. "The problem is that people put food in plastic bags and throw it in the streets. The only difference now will be that they will use a thicker bag to do it. The problem of garbage and cows eating bags will remain as it is because the mentality won't change," he said.

"They should educate people and create awareness instead of giving nagar nigam another excuse to harass us," said a trader. “See this market. There are potholes everywhere but the nagam nigam team did not see this. They were only interested in making money,” he said.

Confusion over plastic ban isn't unique to UP. Prime Minister Narendra Modi has pledged to end single-use plastic in India by 2022, and most of India's 29 states have enforced a full or partial ban. UP is the nineteenth state in India to do it and follows close on the heels of Maharashtra that implemented it from 23 June this year (2018).

But reports after reports tell us that all states have done a poor job of it. In Karnataka where it's in place since 2016 with hefty fines, use of plastic is till rampant. Maharashtra has already revised the rules multiple times.

Experts say that a ban won't help unless states offer cost-effective alternatives, arrange for proper disposal of plastic waste and crackdown on domestic unregistered plastic manufacturing units. UP, which generates over 130,000 tonnes of plastic waste annually, has not yet addressed the larger problem of poor waste disposal systems.

Further, traders' and manufacturers' concerns of what happens to their plastic in stock remains unanswered. A wholesale bakery owner told Swarajya, "I have several kilos of plastic, with our name printed on it, stocked for many months. I have paid GST (goods and services tax) on it. I have currently kept it at home. I do not know if it will be legal tomorrow. If not, it's simply unfair to us."

Throughout the state, raids are being conducted, traders are being fined and polythene is being seized in kilos. This, even as the market concerns have not been addressed. There is unrest and anger. A Whatsapp message is going viral in the circle which asks the government if they'll go after multinational companies using metalised polyester film, which is way more harmful as it's not recyclable, with the same zeal as it's going after vegetable and samosa-sellers.

“These sudden policy decisions have big repercussions where those in charge of implementation get to make a moolah. We are almost never consulted,” complained Naresh Arora.