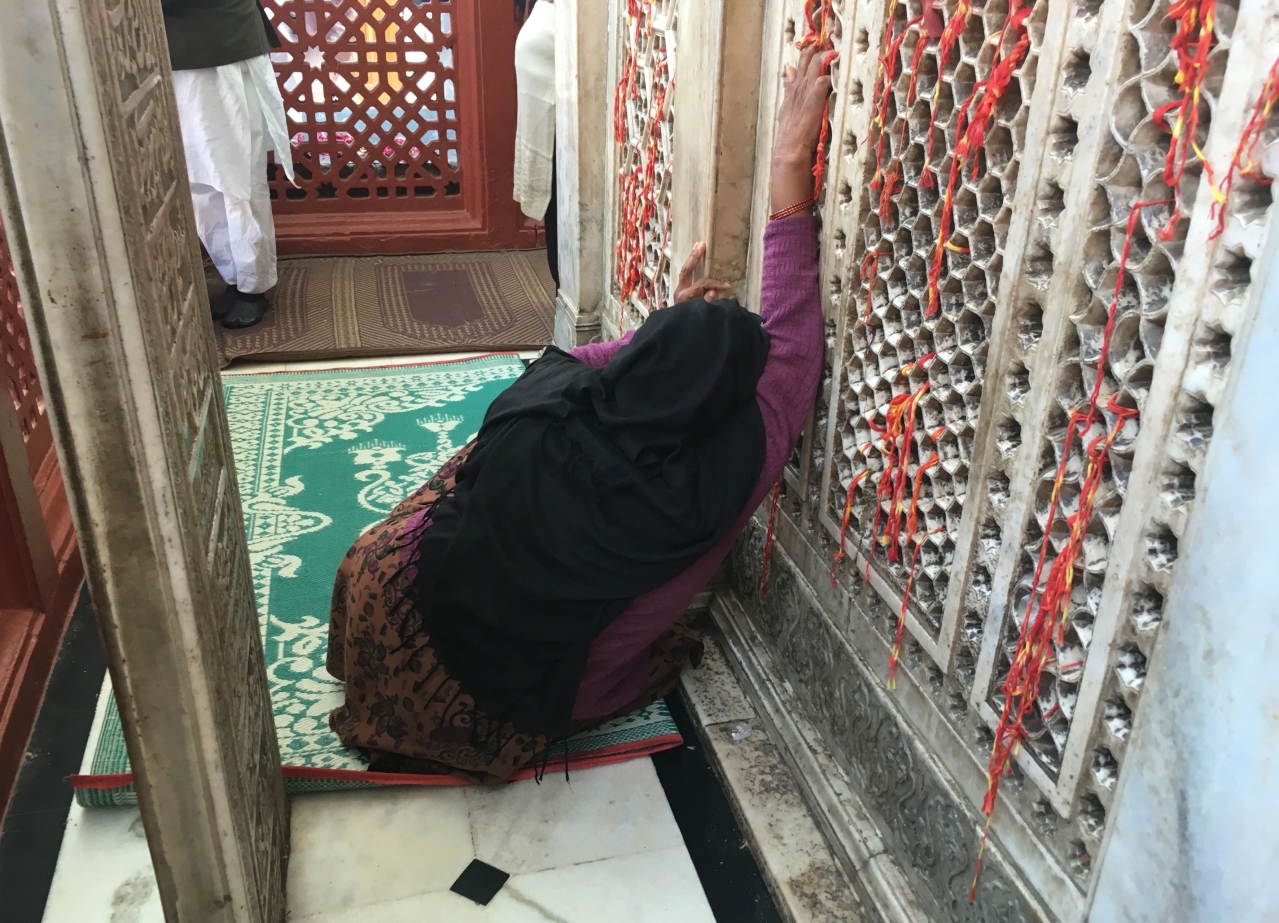 A woman prays from behind the stone-latticed wall on three sides of the main shrine.

A 'humiliating’ experience of three students at New Delhi's famous Hazrat Nizamuddin Auliya dargah (mausoleum) could change entry rules for women in the 700-year-old shrine. A court battle for ‘gender justice’ at the dargah has begun, amid resistance from the management and devotees.

If this sounds similar to the recent Sabarimala temple case, the petitioners in the Nizamuddin dargah have indeed cited the Supreme Court judgement in the case in their plea. 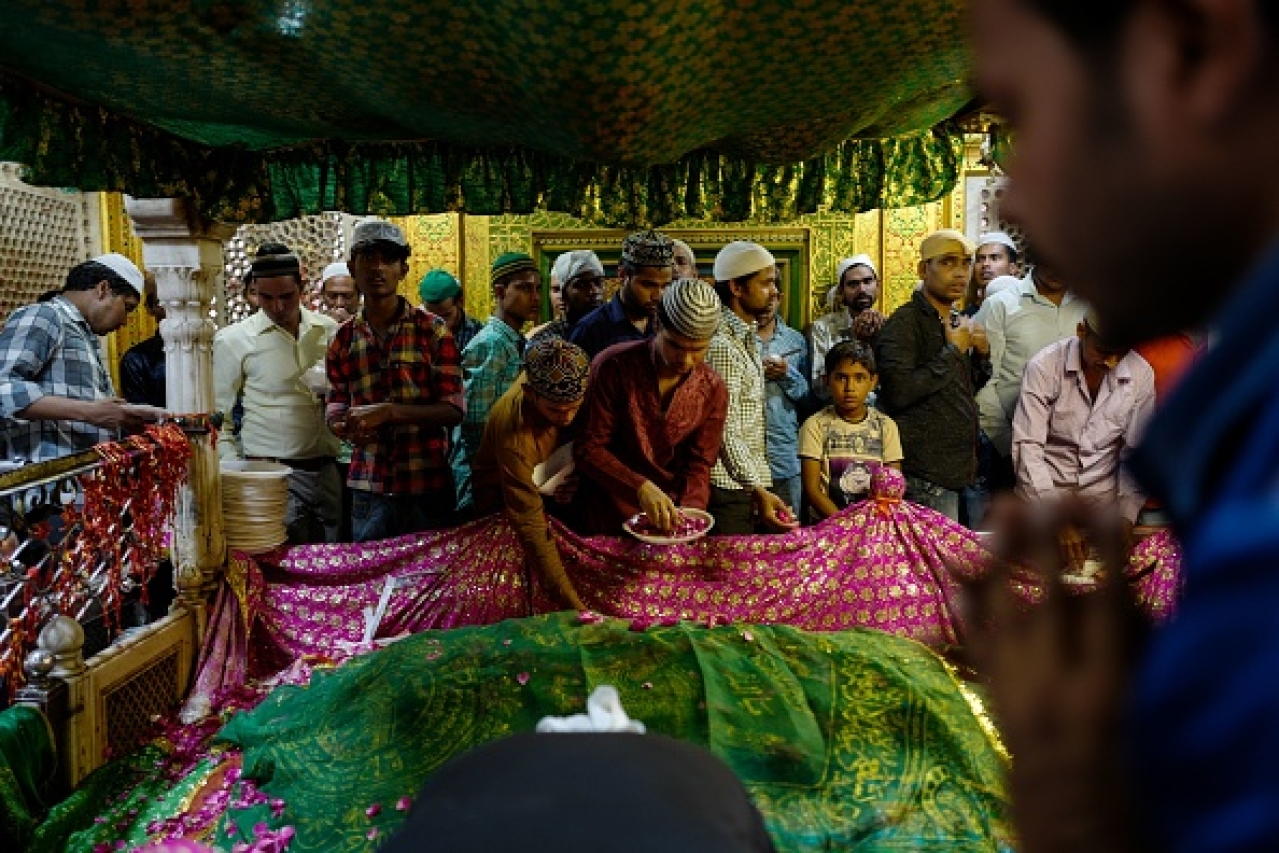 It all began on 27 November when three women law students hailing from Jharkhand — Deeba Faryal, Anukriti Sugam and Shivangi Kumari — visited the historic shrine that is built over the grave of Sufi saint Khwaja Nizamuddin Auliya.

While the larger dargah complex allows free entry to women, the main shrine housing the grave has a board fixed at its entrance that reads "ladies are not allowed inside the holy shrine".

The students didn't notice the board and proceeded to enter, but were "humiliated" and "rudely told to keep out", as per Faryal, who spoke to Swarajya over the phone.

"The episode definitely left us feeling humiliated,” said Faryal, a fourth-year student at Pune University's Balaji Law College. “We returned home and looked up the Internet to see if such prohibition is mentioned in the scriptures. We learnt it is not, and that dargahs like Haji Ali and Ajmer Sharif have no such bar," she said.

The three classmates wrote an email to the dargah management and Delhi police commissioner complaining of the discrimination but received no response. On 6 December, they filed a public interest litigation (PIL) before the Delhi High Court through Delhi-based lawyer Kamlesh Mishra.

"While the entire nation is professing and advocating the entry of women in all religious institutions without any discrimination and the same having been further allowed and promoted by the hon’ble supreme court in the recent Sabrimala Judgement. Women in the heart of the Country and the Centre of the Capital are being discriminated with and their entry into the Darghah of the Hazrat Nizamuddin is prohibited that when it is just 15 minutes away from the Hon’ble Supreme Court and the Hon’ble Delhi High Court (sic)." 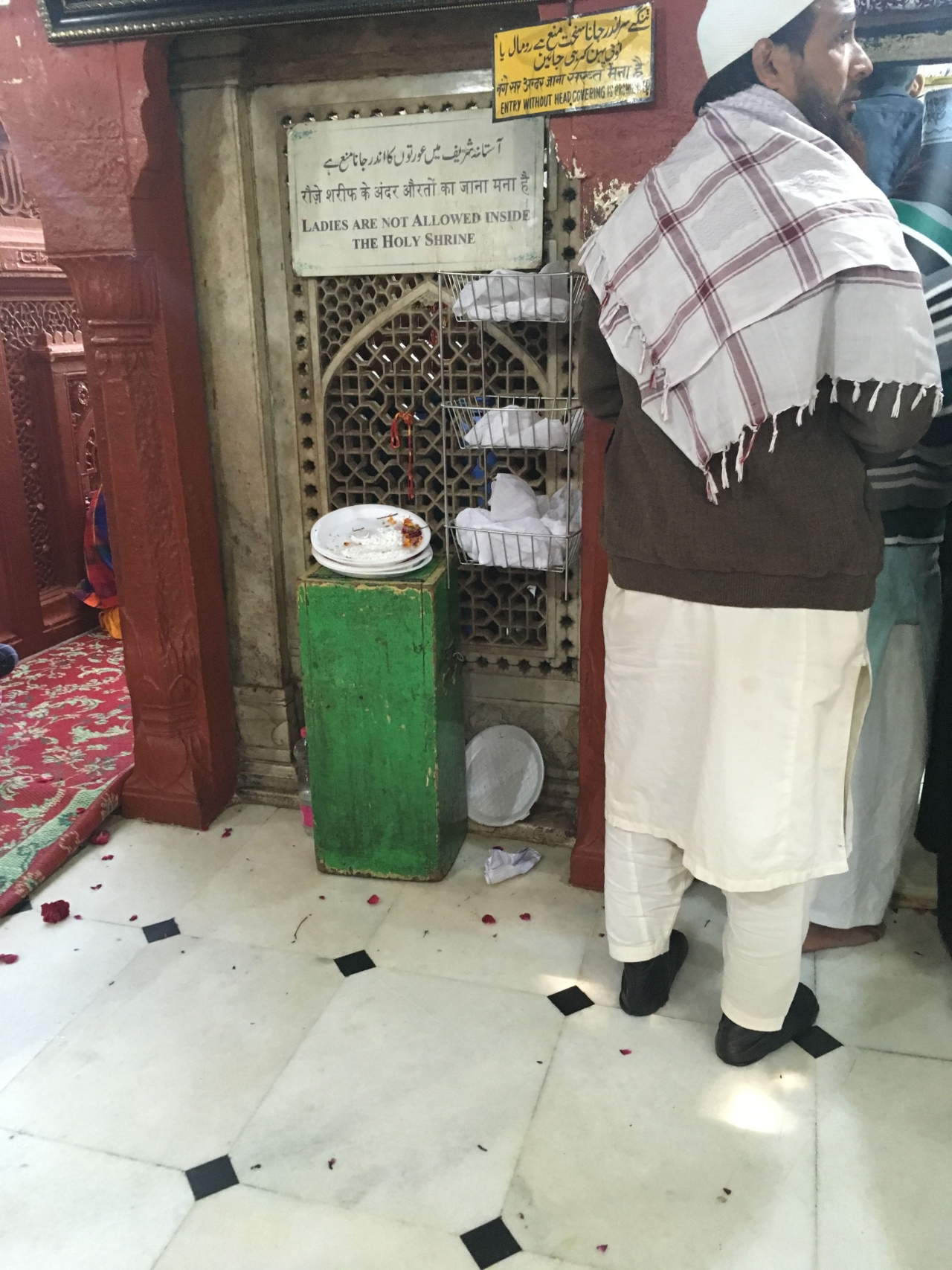 A board at the entry of the shrine housing the grave prohibit women from entering.

The hearing has been fixed for 11 April, and the court has reportedly issued notices to the state government and the shrine management.

When Swarajya visited the dargah this week, the board outside the main shrine was intact. Men huddled inside offering chaadar at the grave while women offered prayers behind the stone-latticed wall on three sides.

None of the scores of women that Swarajya spoke to was aware of the PIL or, for that matter, even the Sabarimala case. They were unanimous in their support for the prohibition on their entry. 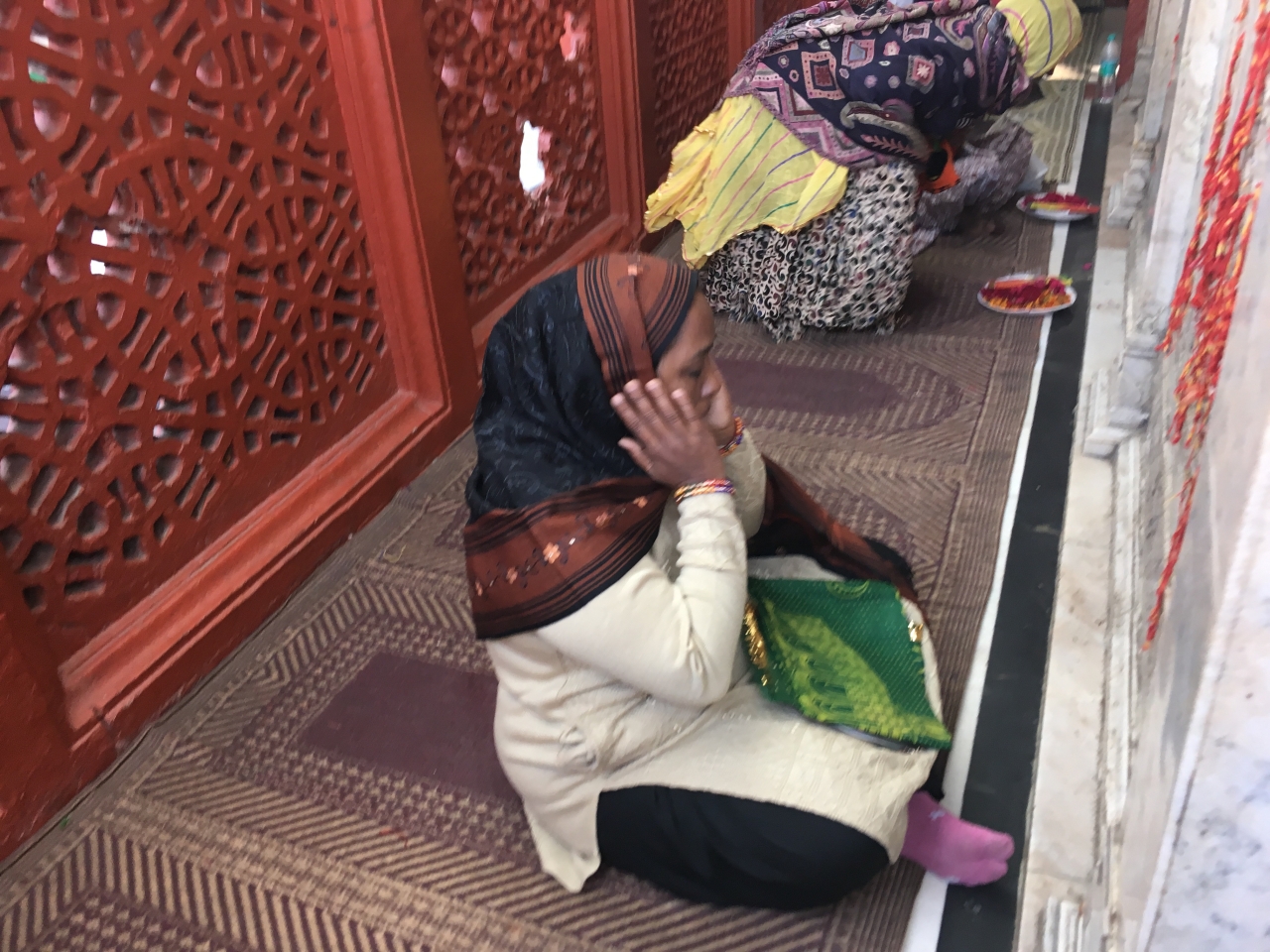 Women pray from behind the stone-latticed wall on three sides of the main shrine.

Neelofer, a 22-year-old local resident who has been regularly visiting the dargah for a decade, said it is mentioned in Hadees (an Islamic scripture, also called Hadith) that women must not touch the grave. "It is a custom and I respect it," she said.

Bhuri, a 57-year-old resident of Delhi's Daryaganj, said Sharia (Islamic law) prohibits women's entry into the mausoleum and she would never go against it. "What will we even achieve by going inside? Prayer from across the wall is as good as praying inside," she said.

A woman from Delhi's Nangloi, who had come with her family and declined to give her name, said women become 'beparda’ and unclothed when they go too close to the grave.

This argument was echoed by several other Muslim women devotees that Swarajya spoke to and, in fact, was also stated by a shrine manager in an interview to a portal. Syed Kalim Nizami, who belongs to Nizamuddin Auliya’s lineage and is thus called a ‘peerzada’, told the portal that women are not allowed to go near graves either in dargahs or graveyards as they can be seen naked by the dead. Yet another woman devotee, who had come from Uttar Pradesh's Baghpat district and requested anonymity, said women's lower body is 'naapaak’ (unclean) and thus they must keep a distance.

The above line of argument is rejected by managers of other such shrines such as Ajmer Sharif and progressive Muslim scholars and activists. In fact, another peerzada at Nizamuddin dargah that Swarajya spoke to — Fareed Ahmed Nizami — also dismissed it. "We don't believe in women being naapaak," said the 46-year-old.

He said, "women’s entry is really a non-issue. As you can see, women are all around in the dargah complex. It is only a very small area where they are asked not to enter. It is for their own safety and comfort. The passage to the grave is narrow and women will brush past other men while entering or exiting."

Nizami said that the dargah is run as per Sufi custom and the custom bars women from touching the grave. "Women themselves made this custom," he said.

"It is not written anywhere but we know.” 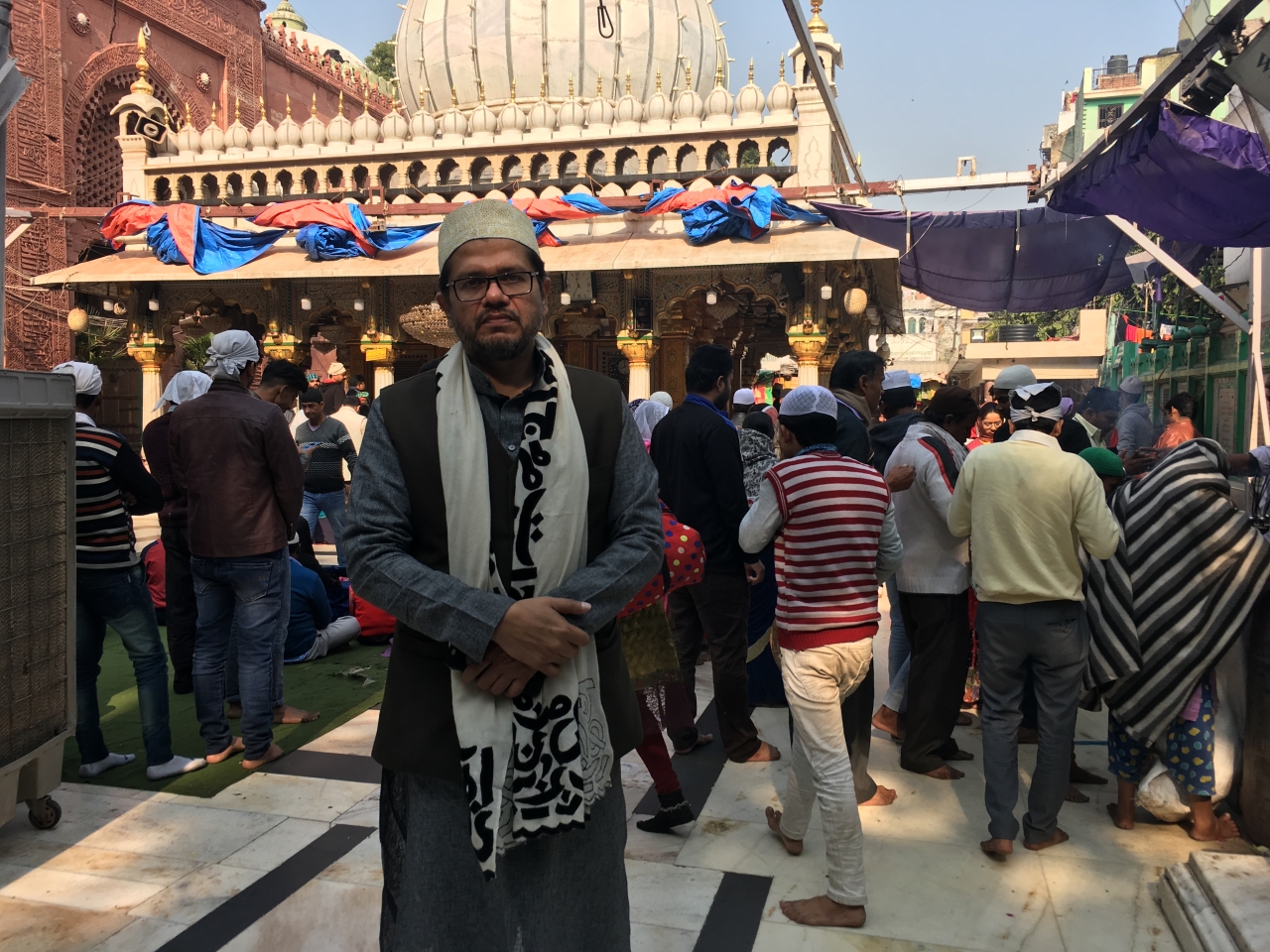 As per Nizami, the existence of dedicated spaces in the dargah allocated only to women shows the place doesn't discriminate on the basis of gender. "There is a separate mosque for women and other earmarked areas for them to pray. Where is this alleged discrimination?" he asked.

He further said that even the donations at the dargah are divided equally between the peerzadas and the peerzadis (the terms used for men and women respectively of Nizamuddin Aulia's lineage who run the shrine).

Nizami said there are around 500 such 'peer' families who live near the dargah.

‘Nizamuddin and Sabarimala cannot be compared’

Asked about the parallel drawn with Sabarimala, Nizami said the two cannot be compared. “Unlike Sabarimala that doesn’t allow women at all, our dargah only prohibits them from entering a tiny space within the complex. The reason is rooted in Shariat,” he said.

Those closely involved with the Sabarimala case, however, counter Nizami’s argument even as they agree that the two cannot be compared. Activist Anjali George, who led the ‘ready to wait’ campaign in Sabarimala supporting the age restriction for women, said, “Sabarimala is a pilgrimage. The temple is only the last step in the pilgrimage,” she said. “Also, this restriction is only for this particular pilgrimage and is not rooted in misogyny.”

In the same vein, advocate J Sai Deepak, who has argued in SC supporting Sabarimala tradition on behalf of groups People for Dharma and Chetana, told Swarajya that just as he would not compare the practice of Haji Ali dargah with the practice of Sabarimala because these are two different faiths and practices, he wouldn't compare Nizamuddin dargah with Sabarimala either.

He explained, “unfortunately, the judgement of the Supreme Court in the Sabarimala case doesn't observe any such nuances since it proceeds on the simplistic assumption that all exclusion is necessarily discrimination, regardless of what the basis may be. Given this blunt approach which lacks restraint, nuance and balance, every religious institution will now have to rewrite its practices in accordance with the Sabarimala judgement. In fact, petitioners in the Sabarimala case had prayed for gender discrimination to be abolished in all places of worship of all faiths.”

For the dargah, legal battle will be tough

Experts say it would be difficult for the Nizamuddin dargah management to justify the prohibition in court.

Sai said that the Sabarimala judgement, for good or bad, rightly or wrongly, applies to Nizamuddin dargah as well. “This is regardless of whether women are barred from entry into the dargah or just a small room in a dargah,” he said.

He added, “given the absence of the concept of a ‘divine feminine’ in Abrahamic faiths, Justice Indu Malhotra was absolutely right in foreseeing that the majority view in the Sabarimala judgement was bound to have graver consequences for minorities, which is what is playing out today. Clearly, the Sabarimala judgement merits review because such issues are best left to communities to decide without any arm of the state imposing its views as constitutional morality.”

It is to be noted that in the similar Haji Ali case, the trustees had taken the following position before the Bombay High Court but it was rejected by the court:

“The Trustees are unanimous on the point that entry of women in close proximity to the grave of a Male Muslim Saint is a grievous sin as per the Islam and as such the Trust is governed by the Constitution Law and particularly Article 26 of the Constitution of India which confers upon the Trust a Fundamental Right to manage its own affairs in matters of religion and as such interference is uncalled for by any Third Agency.

The existing arrangement for Women provides a Secure Place to them to offer prayers. This has been decided in the interest of safety and security of the women and they are close to the inner sanctorum of the Tomb as possible, considering the rush of Men, this arrangement has been welcomed by the women Pilgrims.

Hence the trustees unanimously, hold that at no point of time were women allowed to enter near the close proximity of the tomb of the saint and in fact the current arrangement at a Separate Entrance for women is more proximate to the Tomb than it earlier was.”

Another submission made by the trustees was that “menstruating women were unclean and impure in Islam and hence, could not offer prayers or visit the Dargah/Mosque, and that Islam refers to the issue of separation of men and boys from women and girls in social settings in Holy places.”

However, the stand was rejected by the court that ruled that the verses cited by the Haji Ali Trust did not throw any light on how women being too close to grave was sinful in Islam. The court in its verdict termed the prohibition a violation of the fundamental rights of a person enshrined in the Constitution, paving the way for entry of women into the sanctum sanctorum. 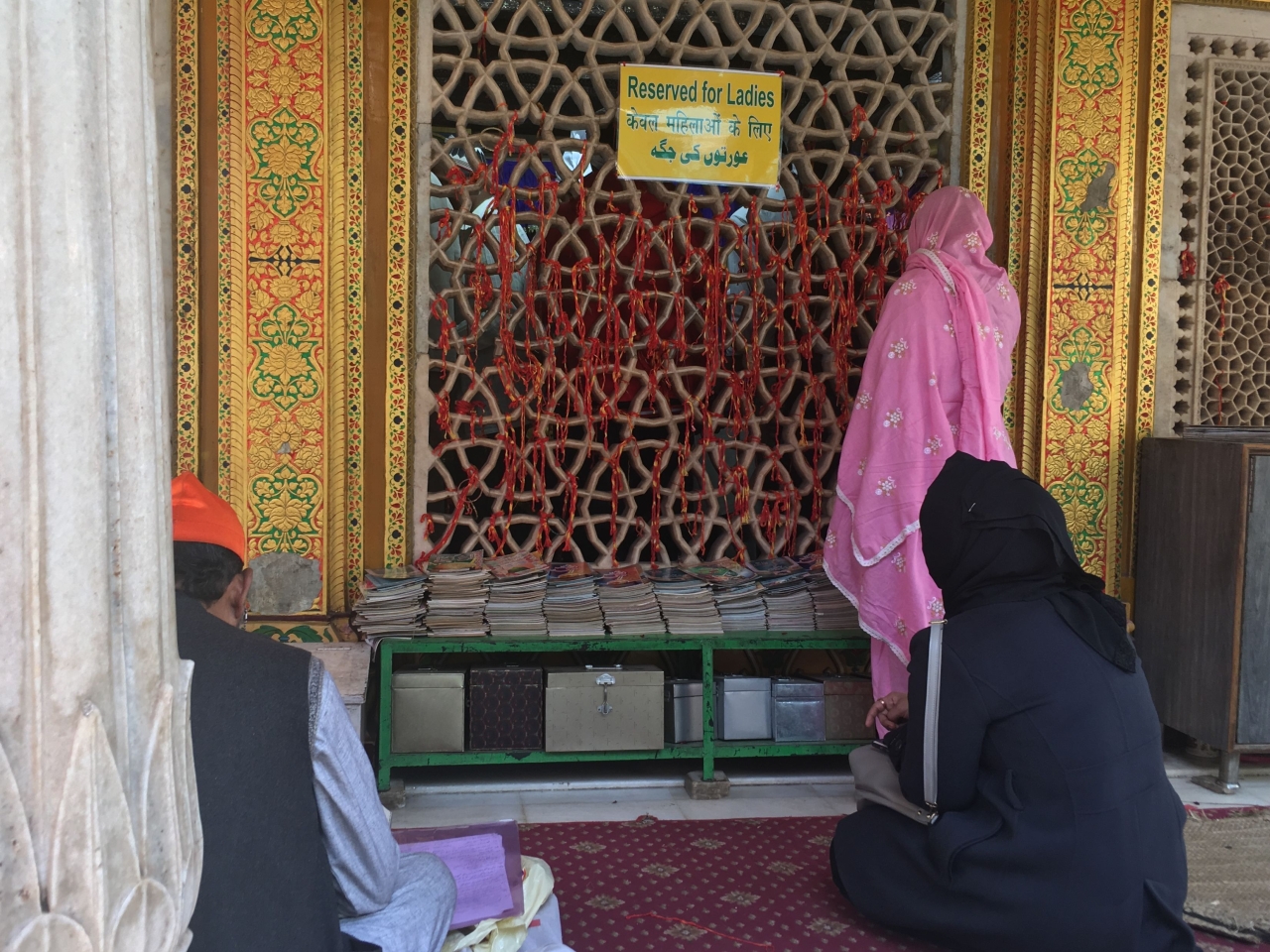 Nizami told Swarajya that their prime argument would be that it is a 700-year-old custom and need not change. “But we would respect the court judgement, whatever it may be,” he added.

Some devotees, like Nagloi's 25-year-old Saddam Hussain, took a more hard line stand, saying the community won't accept the judgement and would go by Shariat only.

A peerzadi, without wishing to be named, told Swarajya that even if the court orders doing away with the prohibition, the women won’t enter.

Get Swarajya in your inbox everyday. Subscribe here.
Tags:
718 Shares