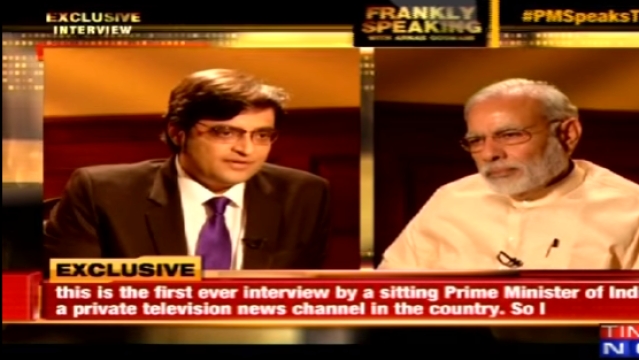 India’s loudspeaker-in-chief Arnab Goswami interviewed Prime Minister Narendra Modi on Monday. This was the PM’s first interaction with a private news channel since he moved to 7, Race Course Road, in 2014.

There is no doubt that the PM came off well in the interview.

Some of Goswami’s professional rivals, however, are not pleased that he treated the PM with kid gloves, but this may just be sour grapes.

Those who closely follow Goswami would know that his shrillness is reserved for Newshour debates only. On ‘Frankly Speaking’, he is Dr Jekyll. He asks the right questions, but he is more in chat mode than inquisition. Witness his interview of Rahul Gandhi before the 2014 election. It took a Rahul Gandhi to blow his chance.

But Goswami could clearly have asked tougher questions of Modi. Here are 10 questions he should have frankly asked, but didn’t.

Q1 Mr Prime Minister, during the general election campaign, one of your slogans was, “Minimum Government, Maximum Governance”. You have repeated this slogan often times after coming to power. Before you claim that you didn’t mean shrinking the government, let me remind you of your tweet of 25 May 2014, the day before your cabinet took oath.

Keeping our commitment to 'Minimum Government, Maximum Governance' we have made an unprecedented & positive change in Ministry formation.

Your cabinet on 26 May was lean and mean and your tweet reflected that. One thought that you fulfilled your commitment. But since then you have expanded the cabinet. Currently, there are 65 ministers in the government (26 cabinet ministers, 39 ministers of state) - slightly less in number than previous governments of Atal Bihari Vajpayee and Dr Manmohan Singh, but not small. Why did you backtrack on your promise? What is the reason for this U-turn?

The importance of shrinking the government would become conspicuous from this question.

Q2 Soon the recommendations of the Seventh Pay Commission will come into force. They are expected to increase the burden on the exchequer by more than Rs 1 lakh crore. Isn’t this going to bloat government expenditure further? Why not minimum government here?

Q3 Mr Prime Minister, another important slogan during your campaign was, “Government has no business to be in business”. But two years after taking over, not one public sector unit has been privatised. Why is the government still in loss-making businesses like aviation or hotels?

Q4 Mr Prime Minister, you had railed against the tax terrorism of the Congress party, but your government has been creative in the realm of taxation. Your laws for eliminating black money and foreign assets are draconian. Also look at the number of new taxes that came into force this month on a single day: Krishi Kalyan Cess of 0.5 percent, tax levy on cash payments of above Rs 2 lakh for goods and services except jewellery; additional tax of one percent on purchase of cars above Rs 10 lakh and the so-called ‘Google tax’. And if, as has been reported, you want the number of tax assesses raised to 10 crore, won’t this create more opportunities for tax terrorism?

Q5 Mr Prime Minister, here’s a follow up question. An engineer beginning work today at, say, an IT firm, gets a salary of around Rs 25,000-30,000. Typically, his company pays his taxes. He has to pay the taxes. He cannot dodge them.

Q6 Mr Prime Minister, you have tried to ensure that the poor get 100 paise for every Re 1 of government subsidies by crediting this directly to their bank accounts. By eliminating middleman, you have effectively saved the exchequer thousands of crores. But why are you hesitating to extend this idea to food, fertiliser and kerosene subsidies after doing this successfully for LPG. Have vested interests scuttled your plans?

Q7 Mr Prime Minister, huge disparities exist in the education sector. It’s been two years but so far we haven’t heard a single policy proposal from the Ministry of Human Resources and Development to tackle them. Why is that so? Non-minority unaided schools are forced to reserve 25 percent of their seats for students from the economically weaker sections (for free) but minority schools are exempt. Why hasn’t your government repealed such blatantly sectarian provisions from the Right To Education Act? Why are private institutions forced to subsidise the education of the poor students when it is the job of the government?

Q8 Mr Prime Minister, during the 2009 Lok Sabha election campaign, Rajat Sharma interviewed you on Aap Ki Adalat. You said some interesting things on that show.

You had said, “humme Pakistan ko uski bhasha mein jawab dena chahiye,” (we should give Pakistan tit for tat) and “ye Pakistan ko love letter likhna band karna chahiye.” Two years into your administration, Mr Prime Minister, you are now accused of doing the same. Why have you suddenly embraced the UPA’s policies?

Q9 Mr Prime Minister, before the elections, you had stirred a controversy by calling yourself a “Hindu” and also a “Nationalist” in an interview to Reuters. Hence you were a Hindu nationalist. But why have you not moved to end the discrimination where Hindu temples are controlled by many state governments, when churches and mosques are free to run on their own, thus enabling them to promote schools and hospitals for their communities?

Q10 The Prime Minister cannot afford to remain silent. But when a man was killed for allegedly keeping beef in his refrigerator, you kept quiet. Many people died in the quota agitation stir in Haryana. The whole state was literally up in flames. But one didn’t hear an appeal for peace from you. Do you think silence is the best policy in all such cases?

There are many other questions that can be asked: on reservation reforms, on the government’s incremental approach to economic reforms, privatisation of public sector firms, health and so on, but the questions above should have been asked by Goswami. One of the biggest flaws in this interview was that there were no “follow-up” questions at all. Some of the answers by the Prime Minister cannot be called answers. They turned into broad statements.

The biggest takeaway of the interview was that we got to know Modi better. It gave us a much-needed glimpse into his thinking and focus areas. Much of it was good.

However, one must never shy away from asking the hard (and right) questions, even if one has a soft corner for the interviewee. Doing so only elevates the level of public discourse and in turn helps in educating the electorate. There is no higher public service for a journalist.