Politicisation Of Army, Et Al: Why The Accusers Themselves Stand Accused 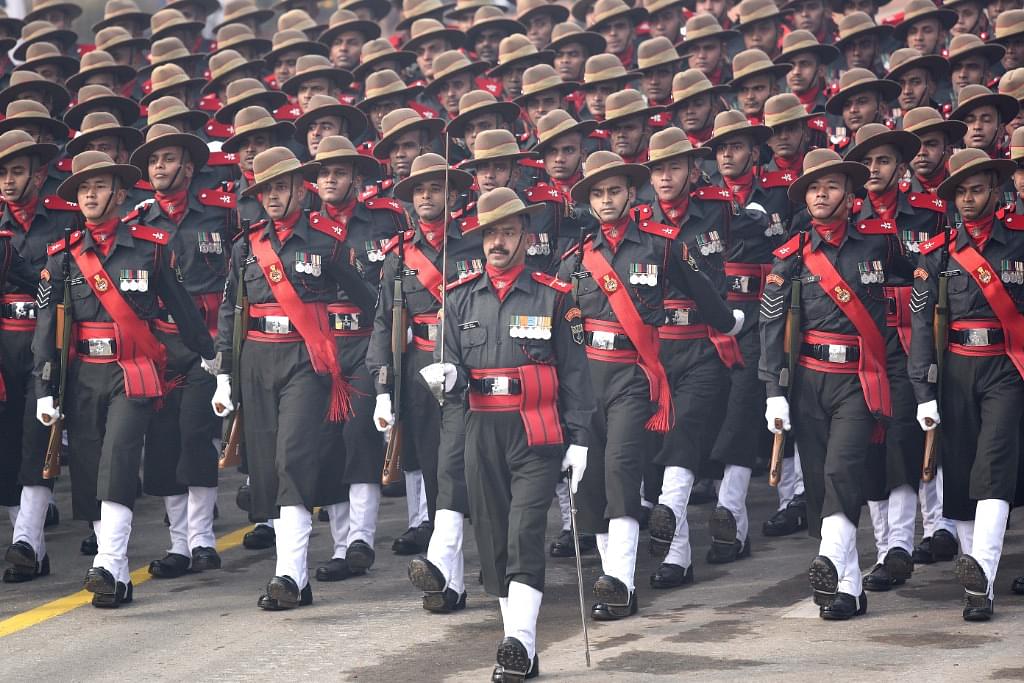 Soldiers of 11 Gorkha Rifles march during a parade. (Vipin Kumar/Hindustan Times via GettyImages)

We are in the midst of one of the most hotly contested elections, where both sides – one trying to ensure a second term for Narendra Modi and the other to deny him the same – are using any and all means to win, but we are frequently told not to politicise this issue or that. Sometimes we want religion and caste kept out of politics and election rhetoric, at other times we want the armed forces kept out of it, and at yet other times we want parties to not doubt the impartiality of the Election Commission of India, etc, etc.

Consider what all has been alleged by somebody or the other so far.

Last week, some 150-and-odd ex-armed forces personnel wrote to the President protesting against the 'politicisation’ of the defence forces. The reference is presumably to the Prime Minister’s use of the Balakot anti-terror strikes by the Air Force for political gains, and Yogi Adityanath’s reference to “Modiji ki sena,” among other things.

Even though some of the signatories to the petition later claimed that they were not party to the petition, the reality of the protest cannot be denied. The irony, however, needs pointing out. Did the army veterans themselves not politicise the forces by signing a politically-loaded petition on the eve of elections? Did some opposition politicians not make crass remarks on the armed forces or doubt the veracity of the surgical strikes? Even earlier, did scores of ex-armymen not sit in protest to demand the implementation of OROP (one-rank-one-pension)? When army commanders feel free to join some political party or the other on retirement, does this itself not lead to subtle politicisation? So, how is it even remotely possible that politicians will not use the army or the police for their political purposes, when it suits them?

Next, there is the allegation that the Election Commission is partisan, and tends to favour the Bharatiya Janata Party (BJP) because all the current commissioners have been appointed by the BJP. The politicisation of the Election Commission is as old as the hills, and there is little doubt that past election commissioners had the blessings of the Congress, and the current ones are those the BJP is comfortable with.

Another line of attack on the Election Commission has been the repeated politicisation of EVMs (electronic voting machines), with one petition now coming up in the Supreme Court demanding that 50 per cent of EVMs should have VVPATs (voter-verified paper audit trail) attached. And this after the Supreme Court has already directed the commission to increase the VVPATs per constituency, from one per constituency to five.

Then, of course, we have this saintly need to keep religion out of politics, when in India religion is often politics by another name. In the past, we have repeatedly seen mosque and church leaders repeatedly calling on believers to vote in particular ways, and after the 1980s, Hindu sants and gurus have also been doing the same. And then, of course, we have had processions of politicians visiting temples, mosques and churches to tell the faithful that they are one of them. Does it matter whether politicians use religion for winning votes or someone else does the same on their behalf? As for caste, are appeals to caste allegiance not visible in demands for reservations and other forms of political largesse?

Even assuming caste and religion are out of bounds for campaigners, why is class somehow kosher? The Left demanding class consolidation is somehow acceptable?

The problem in a diverse democracy is that politicians need committed voters of all kinds to win an election, and till this reality changes, it is futile to expect them to not seek votes in the name of religion, caste, class or some other issue. Democracy is about politics, and it is not possible to hermetically seal any individual or institution from politics, whether it is the army, the judiciary or the Election Commission.

For every finger that accuses someone or some institution of politicisation, three other fingers point in the direction of the accuser.