Port Versus Airport: How India Checkmated China In Sri Lanka 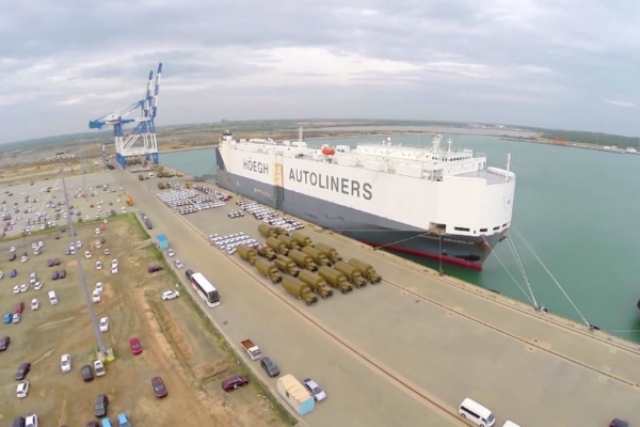 India’s decision to operate the Mattala Rajapaksa International Airport (MRIA) is a masterstroke that will checkmate China in Sri Lanka. The island nation announced late last week that Airports Authority of India (AAI) will enter into a joint venture with Sri Lanka’s civil aviation department to operate the $201 billion airport, described as the ‘world’s emptiest airport’ since no commercial airlines operates out of it.

While the final terms are being worked out, it is learnt that AAI will acquire a 70 per cent controlling stake in the airport and operate it for 30 years. Critics sniggering at what they call is a dud deal have overlooked the fact that MRIA is just 15 kilometres north of the Magampura Mahinda Rajapaksa Port (the Hambantota port) which Sri Lanka handed over to China in December last year on a 99-year lease. This raised security concerns in India and though Sri Lanka has repeatedly asserted that China will never be allowed to use Hambantota as a naval base, India was not fully convinced.

Hambantota in south Sri Lanka overlooks some of the world’s busiest shipping lanes through the Indian Ocean. These shipping lanes are very important for China, which depends on them to meet its energy needs and for raw materials for its many industries that fuel its gargantuan economy. Control over Hambantota port, feels the Indian security establishment, would provide China a huge strategic advantage over a vital chunk of the Indian Ocean and the shipping lanes passing through it.

“Though Sri Lanka had assured India that a firm commitment had been obtained from China that the (Hambantota) port would not be used to even dock Chinese naval vessels, China’s penchant for subterfuge and for going back on its word is too well known. And if China ever goes back on its word to Sri Lanka, the latter would be powerless to act against China. Given this, India had deep concerns over China’s acquisition of the port,” said a senior Indian diplomat.

Also, Sri Lanka has become deeply indebted to China and is in no position to repay the huge loans it has taken from China. “Sri Lanka owes more than $8 billion to state-controlled Chinese firms for the major infrastructure projects undertaken during former Sri Lankan President Mahinda Rajapaksa’s tenure. All these projects are now white elephants and Colombo finds itself in a helpless position. China would thus have found it easy to dangle the carrot of debt relief and extract major concessions such as using the Hambantota port for military purposes from Colombo. China has a history of ensnaring small and powerless nations in debt and making them its client states. It is quite likely that China will go down this route with Sri Lanka and is planning to ultimately turn Hambantota into its naval base to exert control over the vital shipping lanes passing south of Sri Lanka in the Indian Ocean,” said the former diplomat.

According to American geopolitical intelligence platform Stratfor, Sri Lanka's strategic position makes it vital to securing major sea-lanes in the Indian Ocean. To the south, the island’s coast fronts the greater Indian Ocean, and to the north it opens to the Indian Ocean's marginal seas: the Arabian Sea, Gulf of Mannar, Palk Bay and the Bay of Bengal. The island sits approximately halfway between the Suez and the Strait of Malacca, the key maritime choke points to the east and west, and along routes from the Strait of Hormuz, which most of Asia's energy supplies transit. In addition to energy, the sea-lanes surrounding Sri Lanka are also the main route for any other goods being shipped through the Suez Canal. Typically, raw materials will be shipped to Asia via the Suez along these routes, and then finished goods such as garments, electronics and footwear are shipped back.

Sri Lanka has a number of natural harbours along its coast: Colombo and Galle in the southwest, Hambantota in the southeast, Trincomalee in the east and Jaffna in the north. A string of islands blocks large ships from passing through Palk Bay, preventing India's southern coast from becoming more than a regional shipping hub and making Sri Lanka's ports the stopover point for international routes. Consequently, gaining a foothold in Sri Lanka is critical for any power wishing to secure Indian Ocean routes to the east and west. Likewise, losing influence in Sri Lanka can mean the loss of control of these sea-lanes and of vital energy resources and basic trade, says Stratfor.

It is in view of this that India acquiring a controlling stake at the Mattala Rajapaksa International Airport is of such great strategic importance. In doing so, India has effectively put paid to China’s future plans of using Hambantota to control the Indian Ocean. India can keep a hawk’s eye now from the skies over Hambantota, thanks to its majority stake at the airport. As David Brewster, a renowned geostrategic expert with Australian National University’s National Security College says, a key element in any overseas naval base, and even a logistics facility, is easy access by air for people and supplies. “A naval base also requires maritime air surveillance capabilities. Control over Hambantota airport will give India considerable control over how the Hambantota port is used. It is difficult to conceive of the Chinese navy developing a significant facility at Hambantota without also controlling the airport. In short, India is spending $300 million buying an airport to block a Chinese naval base,” says Brewster.

Sri Lanka handed over control of Hambantota to China for $ 1.2 billion in December last year. Hambantota port gives China a strategic foothold along a critical commercial and military waterway. Top officials in Sri Lanka say that though the deal has erased roughly $1 billion in debt for the port project, the island nation is more in debt to China than ever since loans for major infrastructure projects were taken by (former president) Rajapaksa at rates much higher than those charged by international lenders. “China has very cleverly put us in a debt trap and has started extracting major concessions from us. The takeover of the Hambantota port is the first of many such concessions Sri Lanka may have to make to keep Beijing happy,” said a former Sri Lankan diplomat who served in both India and China. Sri Lanka’s precarious financial state can be judged from this statistic: though it will generate $14.8 billion in revenue this year, it will have to pay out $12.3 billion as debt servicing to international lenders, primarily the Chinese.

This, say Indian diplomats and security experts, puts Colombo in a very vulnerable position vis-a-vis the Chinese. Also, Hambantota port will not generate much revenue. “Ever since the port was commissioned, few ships have docked there and it is a dead port. The question that arises is why have the Chinese taken over the port,” says Deepak Nair, a security expert. Shivshankar Menon, India’s former foreign secretary who was also the National Security Advisor (NSA) when the Hambantota port was being built with Chinese financing, provides the answer: “The only way to justify the (Chinese) investment in Hambantota is from a national security standpoint - that they (the Chinese) will bring the People’s Liberation Army in”. Thus, he says, China has acquired Hambantota port to ultimately use it as a naval base to exert control over and monitor the busy shipping lanes south of the port.

India has checkmated China on this through a two-pronged strategy. New Delhi quietly worked with Colombo and got it to shift its southern naval headquarters from Galle to Hambantota. Sri Lankan Prime Minister Ranil Wickremesinghe announced this vital move last week. With the Sri Lankan navy moving in to Hambantota and India acquiring a controlling stake at the airport that overlooks the port, China can no longer use the port as a strategic base. New Delhi has, thus, effectively checkmated Beijing in Sri Lanka.