Pratap Sarangi And The Slander Fest Around Him 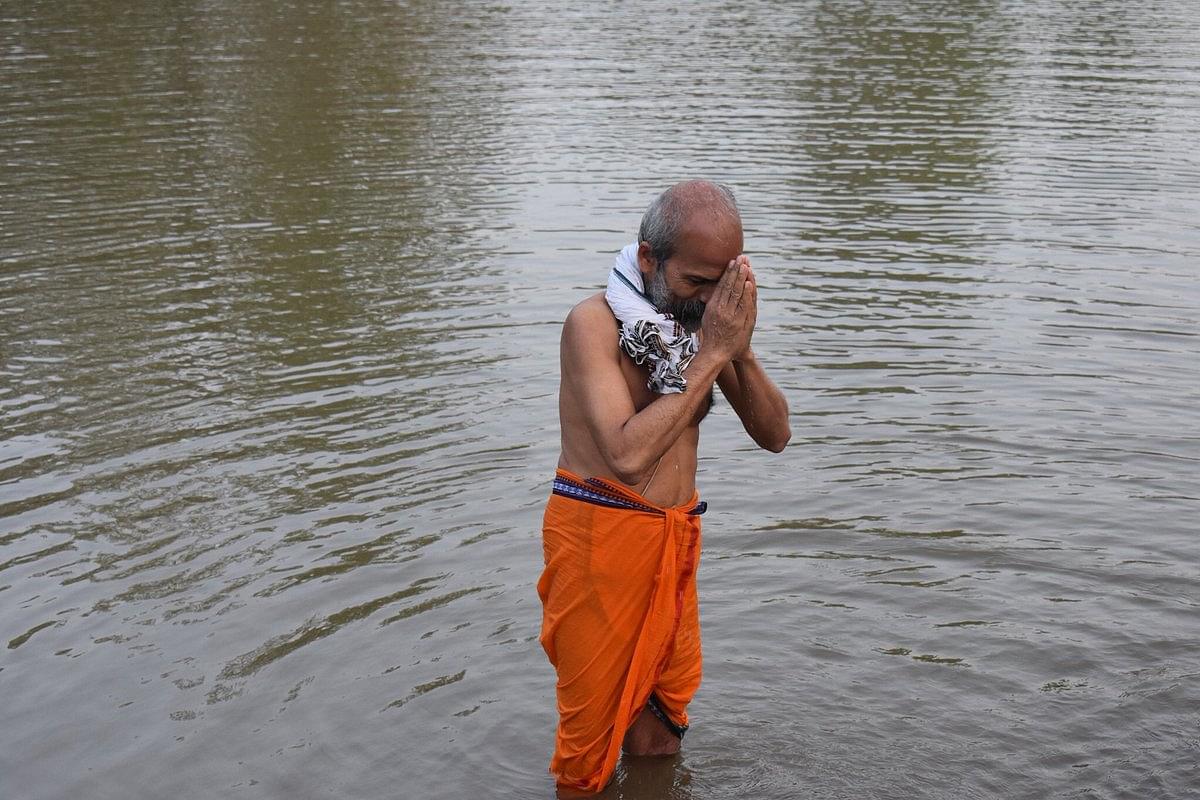 Pratap Chandra Sarangi is a known name in India now. He received tremendous applause as he walked up to take oath as a Minister of State in the Narendra Modi Cabinet. Social media accounts today narrate stories of his frugal lifestyle, of his austerity. Many are in awe that such politicians still exist in the country.

But till a week back, he was still the ‘Nana’ (elder brother) from Nilgiri, Balasore, who reminded Odias of the much-loved Gopabandhu Das. His claim to fame was not his austerity, but the absolute lack of noise from his end about it. He was a politician who’s fame spread slowly, through whispers and surmised chit chat, always through others because he rarely spoke of himself.

And that is what captured people’s attention in Odisha. The nonchalance with which his public service was blended into his personal life choices drew appreciation. It was for everyone to see but still not on display. And then, when he started coming into public glare, there was the disarming honesty which people had forgotten to associate with politicians.

For instance, in an interview, he was asked whether he was just “unmarried” or “celibate”. The question would perhaps have thrown off others, but he simply replied “yes” to the former and “no” to the latter.

Today, he is moving towards cult status. The hermit-like man who pushed a cycle during his campaigns and who can fit all his possessions into a suitcase, defeated two millionaires. In India, we sometimes make too much of austerity. But Pratap Nana is one of those who has never let that austerity define him. It is just there, much like the adulation he gets. Water off his back. As he mentioned, in one of the interviews post his coming to Delhi, “His equilibrium is still intact”!

But sadly, many others looking at the journey of a self-made, no pretence and ideologically grounded man, have actually lost their equilibrium. Around a week has passed since Pratap Sarangi captured the attention of the nation, and all it took was a week for his hard-earned credibility and goodwill to be tossed around in the power-drunk ivory towers of liberal conscience keepers. The slander fest around him has begun and is gaining strength.

A commentator on Twitter went on to call him a “terrorist” who had apparently masterminded the ghastly Graham Staines murder in Manoharpur, Odisha. The accusation is that Sarangi, as the leader of the Odisha Bajrang Dal unit at that time, is “guilty” of the murder and the adulation that he is currently receiving hides a “sinister and chequered” past.

Let us get to the root of this.

In the year 1999, in a tribal village of Manoharpur in Keonjhar district of Odisha, Australian missionary Graham Staines and his two young sons, Timothy and Philip, were murdered when their vehicle was torched while they were asleep. They had arrived at Keonjhar from Baripada to organise a ‘Jungle Camp’ which was a front for conversion activities in the state. In 2003, a trial court convicted Dara Singh and 12 other people of the crime after a CBI investigation. A commission headed by Justice DP Wadhwa was set up for enquiring into the crime.

Keonjhar, like much of tribal Odisha, is a hotbed of evangelical activities and wanton conversion. In 1999, the situation was more tense than it is now with repeated skirmishes between Hindu and Christian communities in Mayurbhanj and Keonjhar districts. The district officials were not aware of the provisions of the Freedom of Religion Act, and many were even ignorant of the Jungle conversion camps being run in the area.

It is true that Pratap Chandra Sarangi was indeed the coordinator of the Bajrang Dal in 1999 when missionary Graham Staines and his two young sons were brutally murdered in Odisha. It is also true that Sarangi, like many other members of the Sangh Parivar in Odisha, has steadfastly stood against evangelical activities in the state and has been a vocal critic of conversion.

Having worked on the education of tribal children in Odisha, he still remains convinced of his views on the challenges that missionaries pose in multiple districts of the state. When the Wadhwa commission began their investigations on the murder, Sarangi was a key witness who testified in front of the commission.

Slander, Due To Hindutva Beliefs

But the slander is subtly tied on to the above beliefs he holds and then moves to the territory of insinuating criminality by association. Sarangi’s views on conversion and his position as the head of the Bajrang Dal in Odisha in 1999, are being used to paint him as the mastermind of the murder of Graham Staines and his sons. And this cannot be further from the truth.

Post the gruesome murder in 1999, the Wadhwa commission was put in place to uncover the truth behind the crime. The commission found that Dara Singh alias Rabindra Kumar Pal was found to be solely responsible for the crime. Dara Singh was a known criminal element in the area with multiple cases registered against him. He was also actively involved in anti-conversion and cow protection related activities and the nature of campaigns organised by him, sometimes were violent.

The commission led by Justice DP Wadhwa found that there was no evidence to establish any links of Dara Singh with the Bajrang Dal and the report did not associate any organisation with the murder.

So, did Dara Singh belong to the Bajrang Dal at all? The commission report states that “Dara Singh was perceived as being associated with the Bajrang Dal and the BJP in Sadar Circle of Keonjhar District and Karanjia Circle of Mayurbhanj District, at least for the purposes of intelligence and police records”.

Affidavit, Not Challenged By The Church

But, Pratap Sarangi as the coordinator of the Bajrang Dal had through an affidavit mentioned that Singh was not a member of the Bajrang Dal. Surprisingly, neither the state government nor the National Council of Churches had at that point provided any contradictory evidence to what Sarangi had said or had questioned him any further.

As stated earlier, there was even no documentary evidence to establish Singh as a member of the Bajrang Dal, forget about evidence for a plot involving Bajrang Dal leaders and Sarangi in particular.

So, the question again stops at, how did the culpability of Sarangi get established in a crime where the primary accused was identified as a lone ranger? What is the evidence on the basis of which leading national commentators and international media are slandering him and some even calling him a terrorist? Or does his steadfast and spirited opposition to anti-anti-conversion activities in Odisha, make him a criminal to some?

But there is an important finding from the Wadhwa commission which is less discussed. And that pertains to the scathing negligence and incompetence of then Congress-led state government in Odisha which was pointed out in the report. According to the report, the police investigation was shoddy, the FIR was doctored and the five people named as accused in the FIR had nothing to do with the crime. The investigation notes in the report suggest that the two eye-witnesses in the FIR, Ralia Soren, and Peter Murmu, could not read the contents of the FIR and ultimately said that they did not know how the names of the accused came on the FIR.

The report in fact went on to suggest that the 51 people, mostly belonging to the RSS, who were arrested immediately after the incident were found to be innocent. The Wadhwa commission report states, “Though initially the State Government took a great deal of pride that police arrested as many as 51 accused showing the efficiency and promptness of the police but ultimately subsequent events showed that in the State of Orissa as far as these 51 persons are concerned there was no rule of law.”

This was the critical juncture where the attempts to fix the blame on the Bajrang Dal and the Sangh Parivar was being attempted and the whole process leading up to it was dismissed by the Wadhwa commission. While not specifying, the consequences of the shoddy police work of the first few days, the report goes on to say, “State Government was rattled by the gravity of the crime. To divert attention from its own failure to maintain law and order and to protect the innocent and then to slow 'speedy and decisive' action, a false picture is presented”.

But, the state government was able to sow the seeds hate against the Sangh functionaries and Bajrang Dal through this period and this was further fuelled by Christian organizations which went on to say that the findings of the Wadhwa commission were “disappointing, incomplete and deliberate”. Even without any documentary evidence to establish membership, the Keonjhar police had repeatedly mentioned Singh to be a Bajrang Dal ‘sympathizer’ and ‘supporter’.

It could very well have been true, but it is barely enough to make the organisation culpable for his crime without a shred of evidence.

But the obfuscation lives on. 20 years down the line, the same arguments and propaganda has been warmed up and served again as Pratap Sarangi became a social media sensation. The accusations are mostly lies, but are sinister enough to paint a man known for his probity in public life as a criminal. There may be disagreements with his politics of standing against anti-conversion activities which he or any person working on Hindu causes in tribal belts will be able to reasonably defend. But tying him to a crime where there is little evidence to suggest any culpability is slander and the motivations behind this are to be judged.

The day Pratap Sarangi started doing the rounds of national TV channels, I hoped that he would survive Delhi and its power corridors. His mettle and resilience will now be put to multiple tests. He will certainly not be without his failings and those will also eventually not escape scrutiny. But to call a man a “criminal” and a “terrorist”, without an iota of evidence to besmirch his career will probably only leave him stronger. Unlike before, the insidious consensus creation of the media has been challenged and now people can see and judge for themselves.

And those who know Pratap Nana from Nilgiri will wait and judge him for his actual failings. Not malicious, concocted lies which are being served cold.