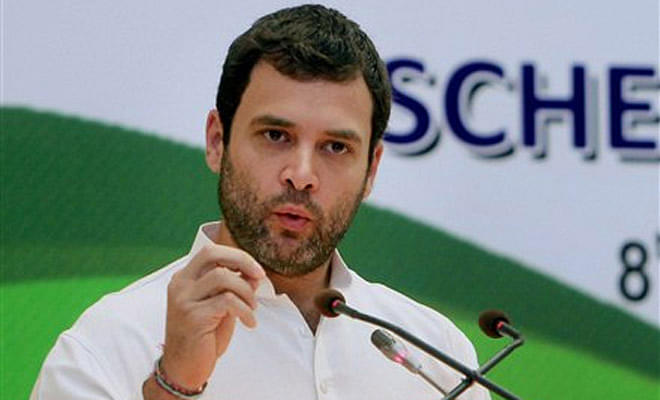 It appears that a large segment of the Indian and foreign media, to say nothing of academics and analysts, were enamoured of Rahul Gandhi, or found it useful to build him up.

Few people, except for diehard sycophants, could now believe that, after his epic failure in the 2014 general election, Rahul Gandhi has much of a political future. Presumably, any dream that his mother, Congress party president Sonia Gandhi, had that her son would become the latest member of the dynastic family to become prime minister has had to be put in deep freeze.

While it’s too early to tell, if Jayanti Natarajan’s revolt inspires other Congress leaders to break ranks, the Gandhi dynasty’s hold on its party may finally weaken or perhaps the party might split into factions as it has done in the past.

Rahul Gandhi may well go down in history as the leader who finally ends up burying the Congress party.  What a difference a few years can make.

Going back even to United Progressive Alliance (UPA) 1, and as recently as 2010 and 2011, gushing and over the top news reports and analysis lavished such high praise on Rahul Gandhi that they made his ascension to power appear almost inevitable.

Perhaps this is not surprising coming from the mainstream Indian media, whose deep ties to the Congress party establishment are well-known and documented. Natarajan herself in her press conference referred to “vested interests” in the media, whom she alleged spread “lies, falsehoods and innuendo” about her, supplied to them, she said, by “vested interests” in the party.

Thus, in the Indian media, you’ll find a whole clutch of cringe worthy pieces that make Rahul Gandhi appear only slightly less impressive than Barack Obama on the eve of his ascension to the US presidency.

A choice read in this category would be a piece from Shoma Choudhury, former executive editor of Tehelka writing in May 2008 whose very headline, “The Pilgrim Prince”, would send all but the most diehard family loyalists rushing for the exit. The final paragraph suffused with purple prose is worthy of quoting in full:

Only time and adversity will tell whether Rahul will answer to his genes and become a powerhouse political leader — with all that it takes: courage, creativity, cunning, decisiveness, the ability to build bridges. What he has going for him already is humility. A purity of intent, which itself is a rarity in Indian politics today. And the intuitive knowledge that no one wins elections in India by machinating in Delhi. He knows he has to hit the long, hard, dusty road. He knows he has to go to the people. The Congress might be in a hurry, but Rahul’s tours are just a beginning in his own journey. And in the search for the key that will unlock the magic of the Gandhi name.

A year later, the May 2009 general elections appeared to many commentators to vindicate their belief that Rahul Gandhi was now a fully fledged and brilliant political strategist. This claim rests on the fact that it was apparently his decision that the Congress should go it alone in Uttar Pradesh (UP), a decision which paid off for them with the collapse in support for Mayawati’s Bahujan Samaj Party (BSP). But even if this is true, it’s quite a leap from saying that Gandhi, or at any rate the advisors he trusts, made a good call on UP to saying that he deserves major credit for Congress’s big election victory in 2009.

If anything, credit for the Congress led UPA’s thumping election victory should go at least as much to L.K. Advani and the lacklustre campaign he ran as the Bharatiya Janata Party’s (BJP) declared prime ministerial candidate. Failing to offer a credible alternative to the UPA, and with the economy doing well, voters naturally rewarded the incumbent. Rahul Gandhi figures nowhere in this basic analysis of why the UPA got re-elected.

Sycophantic Indian journalists are one thing, but even respected and independent foreign correspondents got sucked into the Rahul Gandhi mania.

Jim Yardley, a seasoned and veteran New York Times foreign correspondent and then the bureau chief in India, wrote what can only be described as a hagiography of a living saint in his take on Rahul Gandhi in 2010. His piece begins thus:

Rahul Gandhi’s helicopter descends out of the boiling afternoon sky and a restless, sweat-soaked crowd of 100,000 people suddenly surges to life. Men rush forward in the staggering heat. Teenage boys wave a white bedsheet bearing a faintly cheeky request: We Want to Meet the Prince of India.

Yardley’s portentous prose evokes a god descending from the heavens. And if you think he’s being ironic, read the rest of the piece — where he refers to Rahul’s “enormous popularity” which he reckons could help the Congress win an “outright national majority” in 2014!

The Economist echoed this sentiment in their analysis of the 2009 election where they deemed Rahul Gandhi was “astute” and, if he played his cards right, could lead the Congress to an even bigger win in 2014. Newsweek went even further, suggesting that he could “revolutionize” India in light of the 2009 election victory.

The fact that no one really knew anything much about Rahul Gandhi — he was often glowingly described as an “enigma”, as if it’s a virtue for a political leader to be mysterious — clearly wasn’t seen as an impediment by those trying to paint him as a serious and major national leader.

The case for Rahul Gandhi was aided by surveys such as the 2011 “State of the Nation Poll” conducted by the Centre for Study of Developing Societies (CSDS) for CNN-IBN, CNBC-TV18 and presented by the Hindu. The survey results suggested that Rahul Gandhi was by far the most preferred candidate for prime minister at 19% of people polled — far outstripping all other contenders, including Narendra Modi at a distant 5%.

We all know how accurate this poll turned out to be. But here’s CSDS’s psephologist (and current ideologue of the Aam Admi Party) Yogendra Yadav describing the survey results:

Rahul Gandhi’s sudden rise to the top of the charts as the preferred choice for Prime Minister is a significant moment, perhaps even a turning point in India’s contemporary political history.

We also know how accurate Yadav’s assessment was. What he doesn’t tell us, presumably because it didn’t bear on the survey’s  methodology, is that Yadav was reportedly a political advisor to Rahul Gandhi in the 2009 elections and possibly up until 2012 at least according to press reports. At the very least, if true, Yadav ought to have added a disclosure which, we don’t see in the report.

Being the frontrunner in a survey at 19% is terrific, but it’s hard to fathom how Yadav thought this would be a turning point in India’s contemporary political history based on this slender evidence.

It appears that a large segment of the Indian and foreign media, to say nothing of academics and analysts, were enamoured of Rahul Gandhi, or found it useful to build him up.

Whatever is the case, it turned out that their idol had feet of clay. What I’ve been trying to figure out is why anyone in their right mind would imagine that Rahul Gandhi was remotely popular or charismatic and had a chance to become prime minister or change, the face of Indian politics.

What explains the fact that most everyone was so gung-ho about Rahul Gandhi who’s now all but fizzled out?

Perhaps Rahul Gandhi himself was thinking along these lines. According to Natarajan’s allegations, the Congress party high command specifically instructed her to attack Modi personally, rather than critiquing his policy proposals. Now that to me is the most interesting of the many allegations in her bombshell of a letter.

Postscript: For the record, and for those interested, here’s my skeptical take in December 2010 on Rahul Gandhi, warning of his “theatrical populism”  and here in January 2011, I made the case that the BJP ought to consider throwing the dice on Narendra Modi.