Rahul Gandhi And The Wayanad Paradox 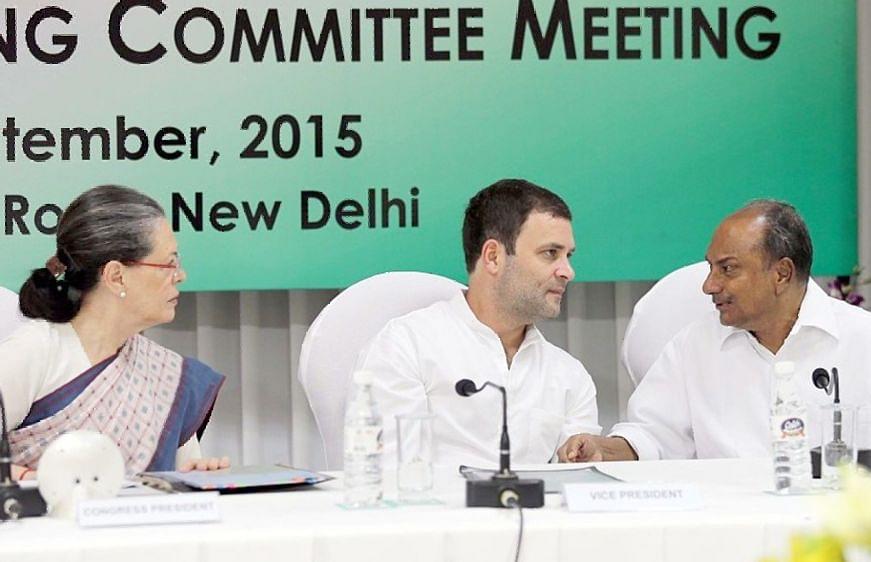 Sonia Gandhi with Rahul Gandhi and A K Antony during a CWC meeting. (RAVEENDRAN/AFP/GettyImages)

By choosing to contest from Wayanad in Kerala, along with Amethi, Indian National Congress president Rahul Gandhi has effectively chosen to give up the north, and, in the long term, gift the south to the Bharatiya Janata Party (BJP). It is possible that Gandhi may win from this Kerala constituency, but to win from Wayanad, while losing India will be a pyrrhic victory, filled with ironies that shall resound for years to come.

Unfortunately, it appears that he has few alternatives, and in their assessment, we may perhaps better understand two phenomena: why his party is withering on the bough, and why the BJP is on the bloom.

The Wayanad parliamentary constituency in Kerala is probably one of the prettiest in India. Lying atop the Western Ghats, at the tri-junction of Karnataka, Tamil Nadu and Kerala, it straddles three districts – Wayanad, Malappuram and Kozhikode. It is a prized tourist destination, with waterfalls, wildlife sanctuaries, and boutique eco-tourism resorts to match every budget.

Wayanad is also, however, the most backward part of the state. Crimes, cloaked conveniently by ideology as Maoist attacks, occur sporadically; most recently, a gang of these ‘Gandhians with Guns’ robbed the guests of a hill resort at gunpoint. The district is also on the Intelligence Bureau’s watch-list, as a hotbed of jihadi radicalisation.

Demographically, the constituency has a significant Scheduled Caste (SC) and Scheduled Tribe (ST) population, with two of the seven assembly segments falling in the seat reserved for STs, and one for SCs. Approximately 60 per cent of the voters belong to the minority communities – roughly 40 per cent Muslim and 20 per cent Christian – with two assembly segments being both more densely populated, and overwhelmingly Muslim-dominated.

Electorally, Wayanad has been a fairly safe Congress seat since the last delimitation, with M I Shanavas defeating his Communist opponent in both 2009 and 2014. The Muslim vote stood so firmly with the Congress that in 2014 the party was able to weather the loss of 9 per cent votes (4 per cent to a disgruntled Muslim independent candidate) and still win.

The BJP has no popular local tribal leader as yet, because of which it has performed poorly here – including in the 2016 assembly elections, when they first surged in the rest of the state. Apart from Sulthan-Bathery (ST) assembly constituency, where they pulled 3 per cent of the vote from the Left, to poll 16 per cent, their performance in most other assembly segments continued to flounder in the traditional, dismal, 4-8 per cent range.

It was, therefore, not surprising that the BJP allowed the seat to go to their National Democratic Alliance (NDA) ally, the Bharath Dharma Jana Sena (BDJS), traditionally an Ezhava-OBC party. BDJS president, Thushar Vellapally, has been nominated as the NDA candidate from the seat.

That is why, when Shanavas died in November 2018, the Communists realised that they had a genuine chance to capture this seat from the Congress after a long gap. And that is also why Gandhi’s candidacy from Wayanad highlights a curious political paradox.

If Rahul Gandhi had not contested from Wayanad, the Congress’ remnant Hindu vote share in other parts of Kerala would have been squeezed out by the BJP, and a chunk of the minority vote by the Communists. Now that he is contesting from Kerala, it is the Left which runs the risk of having its vote base being eroded by both the Congress and the BJP. This is because Gandhi will seek to consolidate the minority vote to offset the exodus of Hindu votes, and he can only do this by taking Muslim and Christian votes from the Left.

The impact will vary from seat to seat, but all of a sudden, it is the Left which now faces a genuine existential crisis – that too, in the last remaining red bastion. Senior Communist leader Prakash Karat voiced precisely these apprehensions, when he said that his party would work towards defeating Gandhi in Wayanad. Kerala Chief Minister Pinarayi Vijayan, whose political fortunes are most affected by this new development, put it more pithily, saying that now, Gandhi’s fight was not against the BJP, but the Left.

Only Sitaram Yechury, another senior Marxist, managed a muted response (possibly because he shares the stage with Gandhi so often). Smarting from this clearly unilateral Congress move, Yechury wondered sadly, what sort of message Gandhi hoped to send out by his Wayanad decision. His disappointment was palpable because he knew that the cozy Congress-Left arrangement, which had allowed both fronts to successfully stem a BJP surge in the 2016 assembly elections, was now dead.

One wonders how much thought actually went into Gandhi’s decision to contest from Wayanad. Was he driven predominantly by the fear of losing to Smriti Irani of the BJP in Amethi? If yes, then the Congress has now fully and firmly receded as a political force in India. If not, then this is probably a most striking instance of desperate, vote-bank politics that one may think of because, as stated earlier, Wayanad is a firm minority seat.

Unfortunately, the deed is done, and either way, the long-term prospects of India’s grand old party don’t look so great now. Whatever the outcome in either seat, rest assured that the BJP will go to town loudly accusing Gandhi of having lost the Hindu vote, and being forced to depend upon the Muslim vote as a last resort. What the Muslim community will think in private, of once again being treated as a use-and-throw commodity, may be left to one’s sad, boundless imagination, because there is no moral place for identity politics in a liberal democracy.

But senior Congress leader A K Antony tried to give a fresh spin to the move, while making the Wayanad announcement. He said that since the constituency lay at a tri-state junction, Gandhi’s candidacy would boost the Congress’ electoral prospects in Kerala, Karnataka and Tamil Nadu.

The southern constituencies of old Mysore state in Karnataka, which border Kerala, have been the BJP’s Achilles heel for decades. A handful of seats from Mysore region for the BJP, and the state’s politics of the past 15 years would have been very different. This is Siddaramaiah territory. Many are SC/ST reserved constituencies, with large pockets of Muslim voters. And yet, in the 2018 Karnataka assembly elections, the BJP actually won from here.

In Nanjangud (SC), the party more than doubled its vote share to win with 48 per cent. If Antony then believes that a Rahul Gandhi-led polarisation will create a beneficial ripple effect in the southern constituencies of old Mysore state, he must first understand that it will also push votes to the BJP. Thus, the Wayanad move, if followed up as intended by the Congress, will actually also help the BJP gain in Mysore region.

In Tamil Nadu, the Congress stopped being a political force half a century ago. The BJP on the other hand, is enjoying a slow, sectoral, but valuable ascendancy in the state, for which reason, the All India Anna Dravida Munnetra Kazhagam (AIADMK) wisely joined the NDA.

Rahul Gandhi may indeed win his party (and alliance partner the Dravida Munnetra Kazhagam) some fresh votes, but in the process, his campaign would also bring into focus, the very reasons why the BJP is attracting increasingly more votes in Tamil Nadu.

Remember, Pon Radhakrishnan of the BJP won Kanyakumari constituency (bordering Kerala) in 2014 entirely on his own steam, and is expected to repeat his performance with an enhanced margin (the AIADMK polled 18 per cent in 2014). Similarly, in Coimbatore, again bordering Kerala, in 2014, the AIADMK won with 37 per cent. The BJP was second with 33 per cent. The 2019 results appear quite obvious.

Therefore, Gandhi’s decision to additionally contest from Wayanad in Kerala has multiple, paradoxical ramifications, few of which offer meaningful short- or long-term benefits to his party.

The symbolism of having deserted Amethi in Uttar Pradesh will weaken the Congress further in northern and western parts of India, giving an advantage to the BJP.

Congress efforts to consolidate the minority vote in Kerala may aid them, but will also in turn, give a fillip to the BJP via a counter-consolidation.

The Left parties stand to be squeezed in Kerala by the Wayanad move, adding to their woes of having alienated some sections of the Hindu community, because of official, officious highhandedness during the Sabarimala agitation. One key option with them would then be to accentuate the rigours of campaigning, thereby raising the prospects of electoral violence. If they still lose, the 2021 electoral maidan will open up for the BJP.

If, as per the Antony plan, the Congress seeks to leverage Gandhi’s candidacy in Mysore region, this may help them, but it will also give more votes to the BJP.

Worst of all, more people will interpret this move, right or wrong, as another ugly example of vote-bank politics, further eroding whatever morality the Congress presently commands.

And if Smriti Irani campaigns in, or decides to contest from Wayanad too, then..!