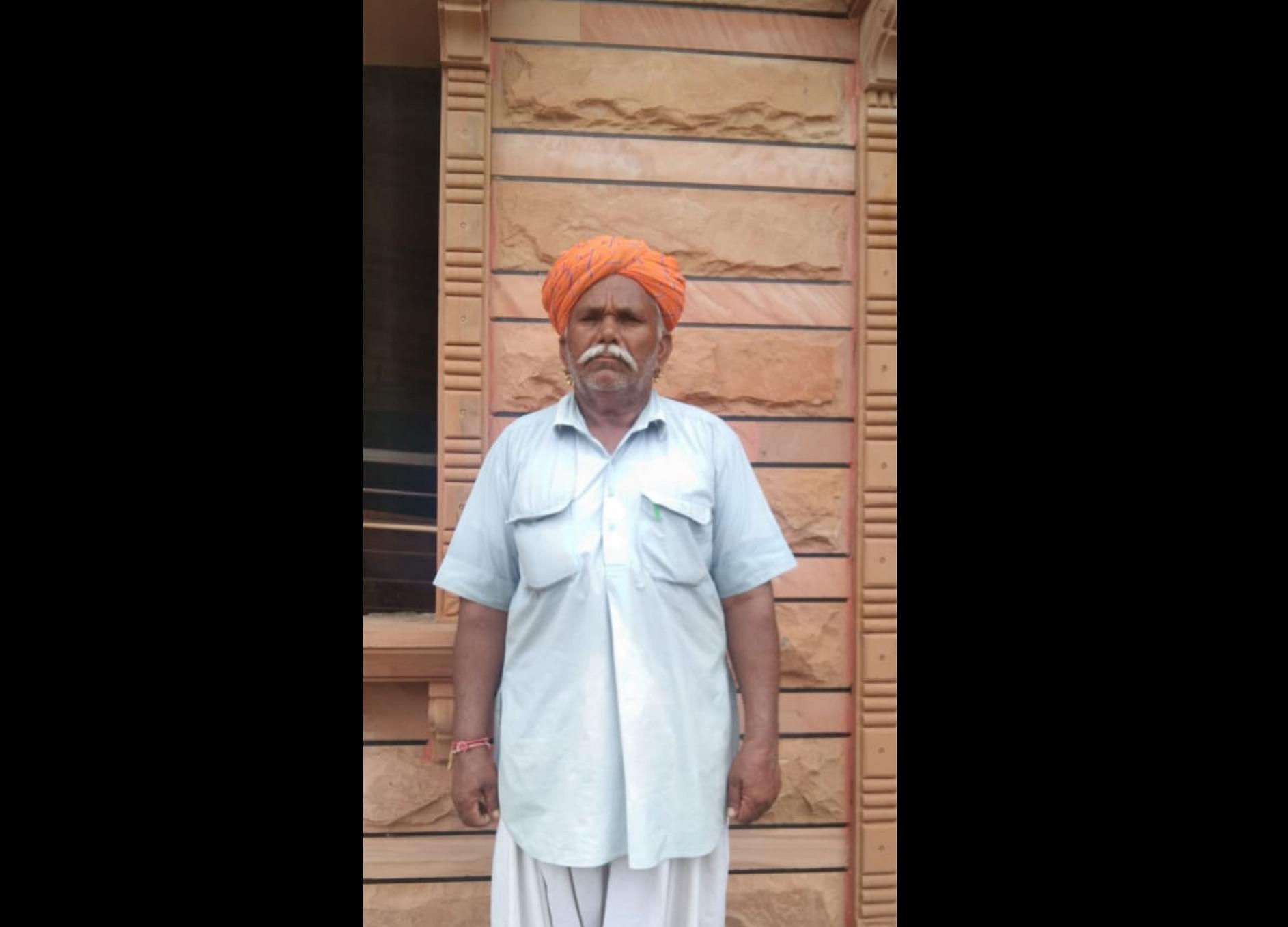 A few minutes into the phone conversation, an enthusiastic Hansraj Ram requests for a Whatsapp video call. “I want to show you my wife, my children, my house and my deities who have always been in our temple,” says the 60-year-old.

His 25-year-old grandson Magga Ram holds the phone while Hansraj shows his Rajasthani turban, the rakhi on his wrist, the chura (traditional Rajasthani bangle) and necklace his wife Sooki Devi and chachi Veera Devi is wearing, his cousin’s flowing and thick moustache, and pictures of Goddess Saraswati and Lord Parshuram in his temple. He walks to his cousin’s house and shows ‘shubh laabh’ written at the entrance of a small temple.

“You see, we were Muslims only in name. We were no different than the Hindus here,” he says and bursts into laughter.

Hansraj Ram is named as Hansraj Khan on all his identity documents such as Aadhaar card, bank passbook, ration card, Bhamashah card, MNERGA card and “khet ke kaagaz”. Wherever applied, his religion is mentioned as Muslim.

The day of the Ram temple bhoomi pujan in Ayodhya – 5 August – changed that too. Hansraj Khan, along with his family, did “ghar wapsi” and became Hindu “again”.

His family was one of the 40 Muslim families belonging to ‘Kanchan’ caste from Motisara village of Payala Kalla panchayat in Rajasthan’s Barmer district. They joined in a grand havan and accepted janeu. (You can read local news reports of the incident here and here).

The village has Muslim families belonging to other castes too, but they did not participate in the event.

Hansraj says that other than the Khan surname on identity cards, there is no cultural or ritualistic difference between the 40 Kanchan Muslim families and the 200-odd Kanchan Hindu families in the area.

Only, the Muslims performed ‘nikah’ instead of ‘vivaah’ and tied the ‘maud’ on the groom’s face a bit differently. Maud is a piece of cloth tied on one side of the groom’s face that blocks direct view of the bride’s face, he explains.

As per Govind Rathore, a neighbour who was part of the event, the village has around 600 families, most of them Khatris and Brahmins. “These families were Muslims only in name,” he repeats, and adds that the village, located close to Pakistan border, has had a good record of communal harmony.

Govind names no specific organisation or person behind the event and calls it a collective village effort.

The Kanchan caste group is largely vegetarian. Hansraj says he does not let anyone who eats meat or drinks alcohol enter his house. He adds that his vegetarianism however has nothing to do with Hindu religion. “Most meat consumers are Hindus only. Meat is not what differentiated us from the Hindus. Some men from my community too eat meat.”

The caste group, whether Hindus or Muslims, buries its dead instead of cremating. Burial ground is common.

Hansraj says none of the Muslim families knows how to recite the namaaz. “We left sunnat long ago,” he says.

His sons are named Kesa and Ashok, wife’s name is Sooki and daughter’s name is Sonu. “We have roti-beti sambandh with [Kanchan] Hindus,” he says.

His grandson Magga says about “40-50 percent” adult men from the 40 families are circumcised. Among the teens, the number is far lower. “Maybe ten percent,” says Magga, who has studied till Class 12 and helps the family in agriculture.

“This generation stopped following that custom too,” says Magga, but offers no specific reason for it. Hansraj says it’s because the “community has been considering ghar wapsi for a decade now”.

He says the caste members are present in eight surrounding villages as well, and Muslims in five of those villages have already done ghar wapsi.

Asked why their plan did not materialise all these years, he says it’s because they could not figure out the process. “Koi guidance nahi tha [we did not have guidance],” he says.

Hansraj says that the families were “always aware” that they had become Muslims “by force” during the Mughal rule - “probably under Akbar”. However, it was only recently that some villagers proposed a formal ceremony for ghar wapsi.

“When they mentioned the day as bhoomi pujan, my heart was filled with joy and hands folded instinctively. I said, ‘bas yehi chahiye’ [this is all I want].”

To complete their conversion, the families will give applications for name change to the district magistrate soon, he says.

As the conversation wraps up, Hansraj makes a request again.

“Please mention our jaati properly – it’s Kanchan and not Dhadhi as some newspapers have written,” he says, and elaborates, “Kanchans were originally Jats, who would keep a record of family ancestry of villages. Daadhis were musicians and performers.“

”My grandson will send you the list of gotras in our jaati. Please publish that too.”

(All pictures were clicked and sent by Magga Ram)