‘Ram Means Roam’ And More: How Textbooks Have Become A Weapon To Brainwash Students In Bengal 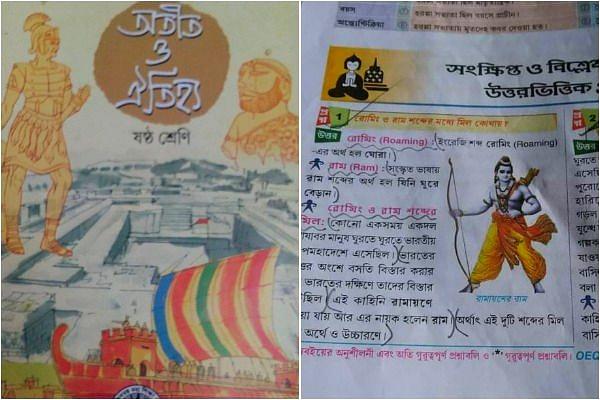 ‘Ram’ in Sanskrit means a wanderer, and its English equivalent is ‘roaming’. Hence, Ram is equal to roaming!

This, and many other scurrilous, ridiculous and deeply disparaging references to Hindu deities, is what is taught in textbooks published by the West Bengal Board of Secondary Education.

The ‘Islamisation’ of school curriculum in Bengal started soon after the Trinamool led by Mamata Banerjee came to power in the state in 2011, but it seems to have turned particularly aggressive of late.

Passages from a Class VI history textbook titled Atit O Oitijhya (past and heritage) that contain highly objectionable and insulting references to Bhagwan Ram have been circulating on social media over the past two days, triggering a lot of anger and anguish. Chapter 4 of the book is on Bharatiya Upamadesher Prachin Itihas Dhara (history of the Indian subcontinent) and is particularly offensive.

The chapter says that in Sanskrit, ‘Ram’ means a wanderer, or a person who roams around. And ‘Ram’ bears close resemblance to ‘roaming’. This ‘similarity’ between Sanskrit and English then forms the basis of the repeat in this chapter of the discredited and scurrilous ‘Aryan Invasion Theory’ that was conjured by leftist historians with a deeply sinister objective.

The chapter says that a long time ago, a group of wanderers migrated from the grasslands of central Asia in search of food and pastures and entered the Indian subcontinent from the northwest. The wanderers started mixing with the ‘original inhabitants’ of the subcontinent and also fought with them.

The migrants from central Asia won most of those battles with the original inhabitants and after settling down in the northern part of the subcontinent, started settling down in peninsular India also. “The Ramayan is related to the wanderers settling down in south India,” the chapter says. ‘Ram’ thus denotes a wanderer in Ramayan, the textbook concludes!

“The stories of victories over the original inhabitants of the subcontinent started spreading by word of mouth and stories started emanating from them. In those stories, the vanquished started getting portrayed in poor light, and being depicted as rakshas, asurs, uncivilised and dacoits. Ramayan is one such story written by the victorious, and hence portrays Ravan as evil and dangerous,” says the book.

The chapter goes on to say that similarities between languages such as Bangla, Hindi, English and Latin is due to their being members of the ‘Indo-European family of languages’. Cultivators from central Asia started migrating away due to shortage of food to many parts of Europe, Iran and India.

The chapter then goes on to make the bogus claim that the Indo-Iranian sub-group of languages, a branch of the Indo-European language group, gave birth to Sanskrit and other languages spoken in India today. The chapter also tries to link the Rig Ved and Zend-Avesta (the sacred book of Zoroastrians).

“That is why there are similarities, but also similarities, between the two texts,” says the chapter. It provides fantastical examples of this: in Rig Ved, Dev is God and very respected while in Zend-Avesta the Dayevs are devils. The supreme deity in Zend-Avesta is Ahur while asurs are those with very negative traits,” it says.

The stories of migration of the ‘Indo-Aryans’ and their settling down in the subcontinent, the chapter falsely claims, is found in Vedic texts and the civilisation the migrants founded came to be known as Vedic civilisation.

The bogus ‘Aryan Invasion Theory’, which stands completely discredited now, was floated by European and then leftist historians with a very malevolent purpose. “The objective of this project based on deceit, dishonesty and duplicity was to prevent possible outrage among Indians over the pillage, loot and unspeakable atrocities committed by Muslim invaders over the centuries,” said historian Sameer Basu.

“By floating this bogus theory, these historians tried to imply that Indians living in North and East India are descendants of invaders who displaced the forefathers of the present-day inhabitants of peninsular India. The implication here is that subsequent Muslim invasions followed the same pattern and hence, there should be nothing to outrage over. This theory was manufactured with this objective in mind,” said Basu. Most other nationalistic historians attest to this explanation.

Others also point out that the lessons from this chapter fit in very neatly with the false narrative propounded by academics owing allegiance to the Trinamool and by many leaders of that party that Bhagwan Ram is worshipped primarily by North Indians and has no place in Bengal. Amartya Sen had also spoken in the same vein after last year’s Lok Sabha polls that saw surprise gains made by the Bharatiya Janata Party (BJP) in Bengal.

“The objective is to paint Bengal and Bengalis as separate entities who have nothing in common with north Indians, whose forefathers were Aryan invaders. Bengalis —Hindus and Muslims —are a different race and distinct from north Indians. This bogus and cunning theory has an inherently political purpose: that of portraying the BJP as a party of outsiders,” said a sociologist and political analyst with the Calcutta University who did not want to be named.

The history textbook is edited by Sireen Masood, a professor of history at Calcutta University, who also provided the ‘scientific hypothesis’ (parikalpana) for the book. The council’s expert committee that vetted this textbook is headed by one Aveek Majumder (lecturer in Jadavpur University’s department of comparative literature) as its chairman and Rathindranath De (principal of David Hare Training College, Kolkata) as its member.

The new school textbooks published during the tenure of the present state government had caused outrage in the past as well when terms like ramdhenu (rainbow) was replaced with rongdhenu in what many said amounted to Muslim appeasement.

Despite protests from parents and some academics, the state government continues with these school textbooks that falsify history and try to deride Hinduism.