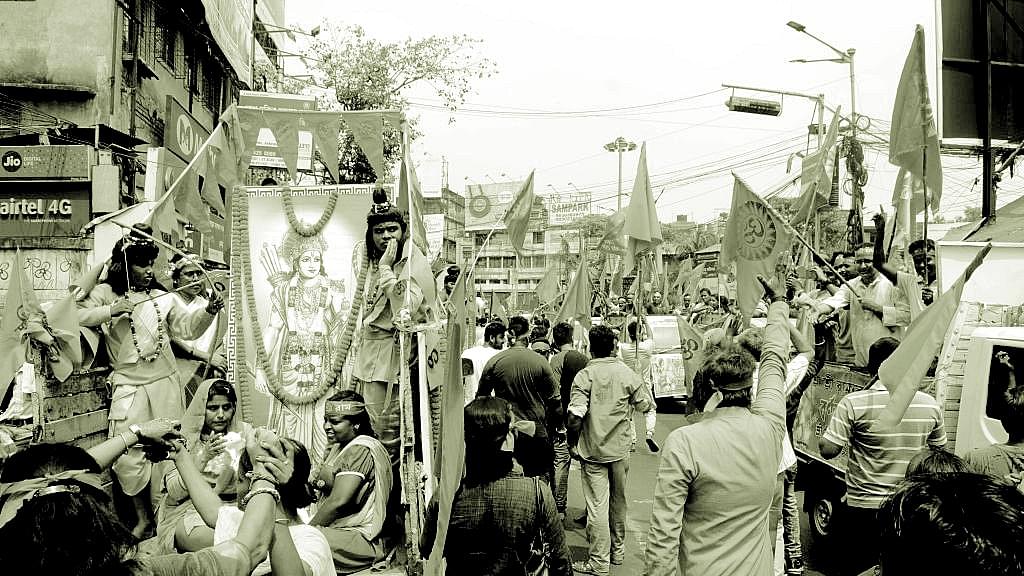 The blame game that has erupted over the violence following Ram Navami processions in Bengal and Bihar has obscured an ugly truth: that many areas in India have become out-of-bounds for Hindus.

Organisers of Ram Navami processions are being blamed, both in Bihar and Bengal, for deviating from the prescribed routes and taking the processions through or past Muslim-dominated areas or mosques. The common charge is that the Muslims were "deliberately provoked" into attacking the processions or retaliating later on, as in Raniganj and Asansol in Bengal. What those mouthing this charge imply is that Hindus cannot venture into Muslim majority areas, especially if Hindus are engaged in any religious activities. And if Hindus dare to do so, retaliation from Muslims is inevitable and fair.

The arrests by the administrations of both Bengal and Bihar also prove this. Most of the arrested are members of the bodies that organised the Ram Navami processions. They have been arrested on various charges, but one common charge is that of deviating from route of the processions laid down by the respective administrations. In effect, they have been arrested for leading the processions into or past Muslim areas. The clear message that the governments of Bengal and Bihar are sending out is that Muslim dominated areas are no-go for Hindus and if Hindus violate this unwritten rule, they will not only be penalised, but will also become fair targets for radical Muslims.

It is a fact that Hindus cannot venture safely into many pockets in Bengal, as well as Bihar (and many other states where minority-appeasing dispensations have or are holding power), where Muslims hold sway. Leave apart holding religious processions, Hindus staying in such areas have various restrictions imposed on them: there have been reports of Hindus being asked not to blow conch shells, beat drums or hold bhajans even in the confines of their homes in Muslim-majority areas of Murshidabad, Malda and some other districts of Bengal and Bihar.

Forget ordinary Hindus, even the police do not dare to enter Muslim-dominated areas in Bengal, Bihar, Assam and many other states. The police have to intimate and take the consent of local maulvis and maulanas, or Muslim community leaders, if they have to enter areas like Khidderpore, Metiabruz and Garden Reach in Kolkata to arrest criminals. Police do not muster the courage to enter Muslim-majority districts of Bengal like Malda and Murshidabad, or Mankachar and all ‘char’ (flood plains) in Assam that have been overwhelmed by illegal Bangladeshi Muslims, or Araria in Bihar, to name a few, to enforce the law. The police have had to face many attacks from Muslim mobs--one being the infamous attacks on police and rioting by murderous mobs at Kaliachak in Malda two years ago--when they have entered Muslim-dominated areas or tried to enforce the law of the land in such areas.

Successive minority-appeasing regimes that have ruled Bengal, Bihar and Assam, as well as many other states of the country, are responsible for allowing large swathes of land in these states to become exclusive Muslim enclaves where people from other communities do not dare to enter. These enclaves, for all practical purposes, are run by the powerful maulanas and maulvis and the law of the land seldom applies to the residents of these enclaves. While Muslim migrants living in the United Kingdom and some other European countries have started demanding that they be governed by the Sharia, in India, the Muslim-majority areas are already unofficially governed by it. The maulvis and maulanas in these areas resolve conflicts, dispense justice, pass and enforce fatwas and are the overlords. Minority-appeasing politicians have allowed things to come to such a pass for their petty political ends.

Another important point that is never taken into consideration is that while it has become the standard practice to disallow Hindu religious processions from entering Muslim-dominated areas, no such restrictions are imposed on Muslims. Thus, Muharram processions wind through all parts of Kolkata, including Hindu-dominated areas. There have been no instances of Hindus objecting to Muslim religious processions passing by areas in which Hindus are in a majority or on any restrictions imposed, even unofficially, on Muslims observing their festivals in any Hindu-majority area. For instance, there have been no objections to annual Eid namaz at Red Road outside Fort William.

But the far graver danger is that by ceding control of Muslim-majority areas in states to Muslim clerics, many of who have started following and advocating the regressive and radical Salafi Islam, the country faces the clear and imminent danger of incubating toxic volcanoes within its body. At stake is something much more that Ram Navami processions not being allowed to pass through Muslim-dominated areas. At stake is the integrity of India.