Ramjas College Fracas: Here Is ABVP’s Side Of The Story 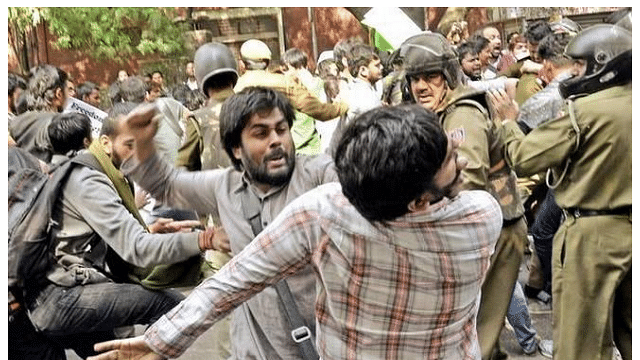 “We beat you up in DU, We’ll answer you in JNU too.

Your dead body we will throw away in the sea.”

This is how the prime accused in the anti-India programme that was organised on 9 February 2015, Umar Khalid, currently out on bail, threatened Akhil Bharatiya Vidyarthi Parishad (ABVP) leader Saurabh Sharma on 22 February at the same Sabarmati Dhaba (where the anti-national programme was organised). Ideally, the crowd should have protested this open threat to a student leader who also belongs to the very same university. But they didn’t. In fact they responded with an ecstatic cheer, applause and hooting.

Welcome to Jawaharlal Nehru University (JNU), one of the last crumbling bastions of intellectually and ideologically deranged Communists!

Khalid’s threat was in response to protests demanding cancellation of his invite as well as Shehla Rashid’s by Delhi University’s prestigious Ramjas College two days before the scheduled programme. Khalid and Shehla were to address a seminar along with other Leftist speakers at the college, which turned hundred this year.

While the students of Ramjas College had no problems with the programme per se, they were displeased with the idea of inviting Khalid, who is facing trial at Delhi High Court for raising anti-India sloganeering during a February 2016 event in JNU, organised to condemn the hanging of Parliament attack convict Afzal Guru. The students feared disturbance of peace and communal harmony in the Ramjas campus as Khalid has a history of inciting crowd with anti-India rants. His calls for ‘azaadi’ and fragmenting India into pieces, evoking emotions by appealing to political fault lines, and demanding the liberation of Kashmir, and eulogising terrorists like Afzal Guru as national heroes, were the points of concern for the Ramjas students.

Hence the students of Ramjas College, led by Students Union president Yogit Rathi, who won as independent candidate (not ABVP), appealed to the college administration to cancel invitation to Khalid. The college principal yielded to the demands.

When the organisers of the programme, comprising largely of the comrades in faculty – mostly members of Left-affiliated Democratic Teachers’ Front (DTF) – were informed about the cancellation of invitation to Khalid and reasons explained, they refused to back down and insisted on having Khalid on the programme.

On 21 February, the day the programme was scheduled, activists of All India Students Association (AISA) and Students Federation of India (SFI) from JNU, along with other DTF teacher-activists, attempted to barge into the venue. When prevented by the security, they began to raise anti-India slogans.

Some of the slogans that they raised include:

Expectedly, such irrational sloganeering was met by peaceful but resolute protests from the student community of Ramjas College, who saw this as an attempt to blacken its century-old legacy. The massive student participation against this event was once again led by Students Union president, Rathi.

Perplexed, the Left brigade comprising members of AISA, SFI and DTF started misbehaving and abusing the peaceful protesters of Ramjas College. Due to the ruckus created by the Left activists, some common students sought help from Delhi University Students Union (DUSU) in order to resolve the issue.

The Left brigade did not even respect the integrity of these elected student representatives and hurled abuses at Ramjas College Students Union office bearers.

Till this juncture, ABVP was nowhere in the scene as it stood for respecting an individual’s right to exercise free speech in line with what Evelyn Beatrice Hall famously wrote in The Friends of Voltaire – the biography of François-Marie Arouet – under the pseudonym Voltaire in 1906. “I disapprove of what you say, but I will defend to the death your right to say it.”

The ABVP does vehemently condemn such anti-India sloganeering. While criticising the government is an inalienable fundamental right guaranteed by the Constitution, secessionism is deemed seditious according to the First Amendment to the Constitution, made on 18 June 1951. It asserts that “interests of the sovereignty and integrity of India, the security of the state, friendly relations with Foreign States” will be supreme and therefore freedom of expression will not be absolute.

Subsequently, the Left cabal manhandled DUSU office bearers and instigated violence against them. Shockingly, the police sided with these AISA and SFI activists instead of protecting innocent students. At this stage, some Leftists slapped a female cop that led to ruckus in the campus in which many students of Delhi University, especially women, were grievously hit and injured by AISA and SFI activists. Police remained a mute spectator at best and atrocious at worst.

All those who were injured at the hands of AISA-SFI activists, are being treated at government hospitals. Many students also filed complaints at Maurice Nagar police station on their own volition.

Next day, that is on 22 February, ABVP on repeated requests of these terrified students gathered in the morning at the Maurice Nagar police station demanding action against the violent Left activists. Around noon, leftist activists – comprising largely of non-DU students, especially from JNU and their teacher activists – reached the venue and started mocking at the shocked students. Once again, they resorted to their “azadi” theatrics and started beating up DU students and ABVP activists.

To dispel the crowd, police resorted to lathi charges in which the leftists were injured. ABVP continued to shield DU students against the Left brigade. As a result, many of the ABVP activists, especially women, were badly affected.

The pattern of disruption of these anarchic forces is clear. Propose a controversial programme, do not seek permission for the programme, or cite incorrect reasons, which leads to cancellation of permission by authority, then claim victimhood and finally create a stir. This time-tested scripted pattern of spewing anti-India sentiment has been successfully applied in JNU several times in the past.

Not surprisingly, the Communists, true to their Goebbelsian character, that is, “repeat a lie a thousand times and it becomes the truth" are resorting to distortion of facts by alleging that ABVP activists hit them while evidence points otherwise. For doing so, they are using their strong eco-system in the academia and media. (These Leftists must be reminded of the fact that Dr Paul Joseph Goebbels served as the Reich Minister of Propaganda in Hitler’s National Socialist Party)

Apart from this usual invective of Left against ABVP, another interesting point that cannot be ignored here is the divide within the Left fraternity after this episode. Many of the prominent Left liberals have either distanced themselves or outright condemned the way AISA and SFI manufactured the DU scuffle.

Just because you wanted to be the first ones to call a protest, you put a lot of lives in danger. You don’t reach out to other organisations, heck, you don’t even reach out to the organisers of the conference! Then you show up unprepared and your cadre from JNU the students of the college feel ambivalently towards. You take no account of the atmosphere of the college, the sentiments of the students, or their need for direction. To expect you to address the trauma and exhaustion of the students and faculty you want to save is the equivalent of expecting those ABVP to see the nation critically, and much like them, you too should be thrown off campus.

Rahul Mishra, a JNU PhD scholar – who was quite active in student politics and was an activist of Democratic Students Federation (DSF) – expressed his disillusionment with Left politics. DSF was created in 2012 after CPM disbanded the entire JNU unit of its student wing SFI for dissenting against party’s support to Pranab Mukherjee’s bid for Presidency. It was a typical Communist intolerance against free speech!

As Mishra responds to Bibek Kumar, another senior activist of the DSF:

While self-proclaimed liberals have jumped in to defend Khalid's right to free speech, this is also an opportune moment to question their hypocrisy.

Recently, there erupted a controversy in Aligarh Muslim University (AMU) over an invite to Shehla Rashid, former vice president of JNU Students Union (JNUSU). Shehla was barred from entering the campus. Earlier, an FIR was filed by AMUSU against her for a 9 January 2017 Facebook post in which she had insulted Lord Ram and allegedly called Prophet Muhammed a “paedophile” and “rapist”.

Ideally, as self-proclaimed champions of free speech, Leftists and Liberals within the JNU and outside should have stormed into AMU and protested against the subjugation of free speech as they did on 22 February in Delhi University. But they couldn’t muster courage to challenge the Muslim fundamentalists in AMU.

Similarly, they are maintaining a sordid silence over the attack on Tarek Fatah by Islamists at Jashn-e-Rekhta. Incidentally, the attack took place on 21 February when Umar Khalid had his programme scheduled in DU. But, most mainstream media outlets and liberals brushed the facts under the carpet.

The hypocritical conscience of the Left remains unmoved and unshaken. Here is the list:

1. Very recently, Left protesters did not allow Prof Markarand Paranjape to enter School of Languages in JNU, where he is a faculty

2. Derogatory and defamatory remarks were hurled at Prof Paranjape at the JNU Lecture Series held in March 2016, where he was talking about nationalism;

4. Film director Vivek Agnihotri was pushed and hurt in Kolkata when he tried to screen his film Buddha in a Traffic Jam;

5. When a protest against Subramanian Swamy had turned violent at the Conference Centre, Delhi University in January 2016;

6. When Swami Ramdev was not allowed to address Vedanta Conference at JNU in December 2015;

7. When the Left had attempted to violently disrupt Narendra Modi, then prime ministerial candidate of the NDA, at Sriram College of Commerce (SRCC), Delhi in 2014;

8. President Pranab Mukherjee was abused in JNU by Communists, especially Umar Khalid who went on to call him “hang man” (of Afzal Guru) and asked him to “go back”. Incidentally, these same people are today knocking at the President’s door to propagate lies against JNU vice chancellor Prof Jagadeesh Kumar;

9. When the then prime minister Manmohan Singh was greeted with black flags at JNU in November 2015 by AISA activists, it was again the ABVP which welcomed him;

10. Similarly, when the then president A P J Abdul Kalam visited JNU in January 2005, JNUSU president, who belonged to the AISA – had refused to honour him with a bouquet;

11. And finally, JNU Left liberals take immense pride in boasting that in the eighties, they didn’t allow then prime minister Indira Gandhi to enter the JNU campus!

If there is freedom of speech, then it must be for all and equal for everyone. Why such hypocrisy?

ABVP strongly condemns such nefarious tactics of the Leftists. The vidyarthi parishad always stands for the nation’s cause and will continue to do so in time to come. The vice chancellor of Delhi University and Ramjas College administration as well as law enforcement agencies must initiate enquiries against those who raised the anti-national slogans in the premier college.

Gaurav Jha is currently pursuing PhD at US Studies Division, Jawaharlal Nehru University and was the Presidential candidate of ABVP in JNUSU 2015-16. His twitter handle is @gjha88.

Saket Bahuguna, a JNU alumnus, has completed his MPhil in School of Linguistics at Delhi University. At present, he is the National Media Convener of ABVP. His twitter handle is @BahugunaSaket.