Rape In Madrassa: Family Horrified At Islamists’ Demand To Marry Off Minor Girl To Her Rapist 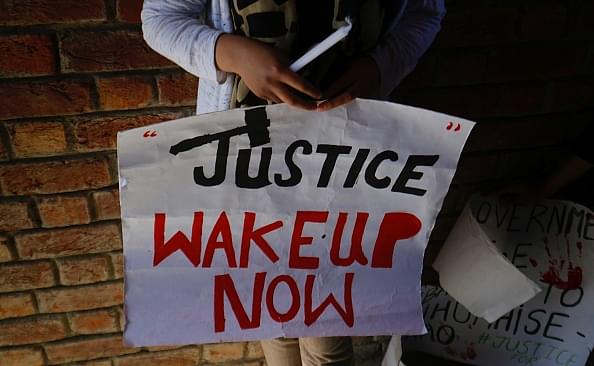 The family of a 10-year-old Delhi girl who was allegedly confined and raped in a madrassa says they are traumatised by social media posts suggesting their daughter “marry” her rapist.

Geeta (as the minor girl is being referred to in the media to protect her identity) was kidnapped on 21 April and kept in a madrassa overnight, where she was allegedly raped by a 17-year-old student. She was recovered the next day after a police raid.

Five days after the police arrested the boy, they also held a maulvi (cleric), in whose room the girl was confined. The crime branch is questioning him and he has reportedly confessed to knowing about her presence in the madrassa on the night of 21 April.

After the initial reports of the case appeared in the media, there were protests by residents and political groups against the ghastly crime, especially given that it was carried out in a place where religion is taught and is hence considered sacred.

Shockingly, some on the social media have defended the horrific act, claiming that news of the rape was “fake” as it was actually a “love affair”. These persons, most of them Muslims, even demanded that the survivor be married off to the minor rapist. Claims were made that the survivor had “confessed” before the magistrate that she was in “love” with the boy and wanted to marry him. Even a student leader of National Students Union of India (NSUI) – the students body of the Congress party – jumped in and put out a post calling the poor girl his sister-in-law, insinuating that she be married off to her rapist.

As pointed out by OpIndia, the comments gave the case a sickening angle that not only aimed at downplaying the rape inside a madrassa but also legitimised sex with a minor, and child marriage.

A teary-eyed uncle of Geeta told Swarajya that the family was horrified at this insensitive and sickening behaviour. “Instead of demanding justice for the girl, they are busy indulging in character assassination. I feel sick,” said the uncle, who recently returned to his hometown in Uttar Pradesh after spending a week in Delhi, where his niece lives.

“I was so outraged that I wanted to lash out (on social media) at those writing such filthy content about my niece. But that would have revealed her identity. I have never felt so helpless,” he said.

“I hope they are all sent to jail.”

It is pertinent to mention here that the law doesn’t recognise child marriage, and even if a minor gives consent, the sexual act is treated as rape. In this case, however, there was no consent, as alleged in the posts.

“Please put out these facts in the public domain. My niece was neither seeing that boy nor did she give any such statement to the magistrate. My sister (the girl’s mother) was present during her questioning and none of what is being claimed was said,” the uncle told Swarajya, and broke down again.

“She is a child! She doesn’t understand anything. You know, ever since she has returned, she has been asking us not to take stress and cry, telling us she has done nothing wrong. She doesn’t even know what has happened with her,” he said.

He expressed the family’s helplessness in dealing with the onslaught of abuse. “We are a poor family. We are finding it difficult to even fight this kidnap-and-rape case. How on earth are we going to tackle the propaganda to malign the girl?!” he said, asking public groups to come forward to help the family “send these men to jail”.

“Given the taboo attached to rape in society, we are already in deep trouble. We can’t decide whether to continue her studies in Delhi or bring her here,” he said.

The family is also not satisfied with the police investigation into the case. “Despite repeated requests, we have not been handed a copy of the FIR (first information report) in the case. We have also not been given a copy of my niece’s statement to the magistrate. Even the maulvi was arrested only five days after the girl was traced despite our repeated allegations that he was involved,” he said.

On 21 April, a 10-year-old girl in Delhi went missing from her house in the afternoon. Late evening on the next day, she was recovered from a madrassa some 15km away in the city of Ghaziabad, in neighbouring Uttar Pradesh, following a police raid.

The police arrested a 17-year-old boy who allegedly took the girl to the madrassa in an autorickshaw. The boy has failed to produce any documents that show him to be 17 years of age. The police suspect he is older and will carry out a bone test on the boy to verify his age.

In two days, the case was transferred from the local Ghazipur police to the crime branch. On 27 April, the crime branch arrested a maulvi named Ghulam Shahid, 35, who manages the madrassa as well as teaches there.

According to a report, people managing the madrassa have claimed that the maulvi was out of the city on the day that the alleged crime took place. Mohammad Qadri, who described himself as a social worker to the website and is associated with the madrassa, said that “the girl and the boy were both 13 and were in a relationship, and had arrived here with mutual consent.”

The girl’s family, however, vehemently denies the claim.

They narrated their version of the incident to Swarajya, as told to them by the girl: On 21 April, the girl’s mother was leaving for work in the afternoon when she asked her daughter to go to a grocery shop to buy milk and biscuits. The girl, who had just entered Class VI, carried a mobile phone with her.

The family earlier lived in adjoining Ghaziabad and had shifted to Delhi only two days ago. Geeta had a friend in Ghaziabad (female, Muslim, and a minor like her) who happened to be near her new house in Delhi, and the two decided to meet up. Geeta informed her mother that, along with buying the said items, she would also meet her friend and return soon. (The family lives on the third floor of a four-storey apartment building in Gharoli village of Mayur Vihar, which is quite crowded and buzzing.)

While the mother left, Geeta went downstairs. She kept talking to her friend on the phone who guided her towards an autorickshaw waiting at the end of the street. (The CCTV footage of the area shows Geeta walking on the street alone.) Eventually she found the rickshaw, but instead of her friend, she found a boy inside. Geeta knew the boy; her friend would introduce him as her brother.

Geeta boarded the auto and together they left for the madrassa. (CCTV footage of the area shows Geeta walking behind the boy towards the madrassa.)

There, she was given spiked water and snacks by a maulvi. It made her dizzy and she went to sleep. She woke up only the next morning, feeling throbbing pain throughout her body. She found it difficult to urinate. She wasn’t served any food the entire day.

Around 5pm, the police reached the spot after tracking the location through the last call made by Geeta to her father. At around 10pm, the girl was rescued and subsequently produced before the magistrate.

Geeta eventually returned home at around 2am.

The medical report of the girl, a copy of which is with Swarajya, says “hymen torn” and “fresh”, indicating rape.

The family, along with neighbours and political groups, staged several protests against the police, demanding immediate arrest of the maulvi, alleging that the police was trying to shield the mastermind while putting all the blame on the boy alone. When this correspondent visited the Ghazipur police station on 24 April, the station house officer refused to share any details about the case, calling the matter “sensitive”.

The case was eventually transferred to the crime branch. The maulvi was arrested on 27 April. Reports say that the maulvi has confessed that he came to know about the girl’s presence in the madrassa at 8pm on 21 April. He, however, did not tell her parents or make any efforts to send her back safely.

The family has alleged that it was at the behest of the maulvi that his student brought the girl to the madrassa. “He was our neighbour in Ghaziabad for a year. He knew when my sister and brother-in-law go to work and when they return,” the girl’s uncle told Swarajya.

He alleged that the maulvi too had raped her. The police are investigating the matter.