Ration Card Fiasco: Kerala Claims To Be A ‘Digital State’, But Is Sticking To Its Primitive Ways 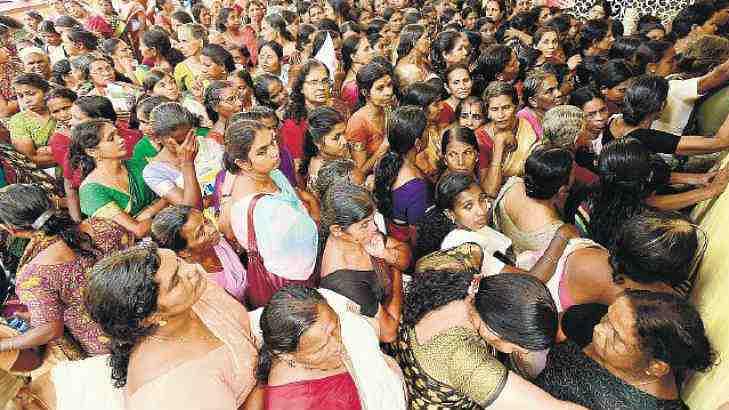 Women wait for their turn to take photograph for the new ration card at a camp in Kottayam. (Photo by Manorama Online)

As expected, there is a long queue of people outside taluk supply offices for commissions and omissions in the new batch of ration cards getting ready for distribution in Kerala. Taking into account the huge turnout in taluk offices, the Minister for Food and Civil Supplies has issued a statement directing the village and panchayat offices to accept complaints regarding corrections. Already late in issuing ration cards for a whopping 7.8 million households, this exercise has made a mockery of the “digitally literate state” of Kerala, thanks to the primitive philosophy of governance nurtured by the major political parties that have been in power there successively.

The data-entry work for the renewal of ration cards is carried out by various government agencies like the Centre for Development of Imaging Technology (CDIT), Akshaya and Kudumbashree. While Kudumbashree works under the Local Self Government Department, Akshaya works under the IT department and CDIT under the Department of Information and Public Relations. These agencies charge the government for their work, and so the state exchequer incurs a heavy cost. For instance, Kudumbashree charges Rs 30 per entry. Despite the high spending, the efficiency of the agencies involved is under scrutiny.

There is no chance for a blame game between any of the political parties since these mistakes have been part of the exercise from the beginning. As the government believes in mass welfare by creating jobs through the state machinery by any means, even at the cost of loss of man-hours and inefficient service delivery systems to the public, the operation and implementation of the ration card scheme seems to have gone to non-competent entities. The refusal to outsource data-entry work clearly shows that the government is still not ready to pull back from its attitude of trying to do everything by itself.

It is not the first time that Kerala is suffering because of the inefficiency of government agencies involved in delivering services to the people. A year ago, the failure of Kerala Book and Publishing Society (KBPS) in printing and distributing textbooks to school students in time was discussed and debated in the state. In both cases, government agencies had the monopoly in delivering services, and they failed miserably in meeting the needs of the people.

The current situation also reflects the lack of desire for modernisation. We are still debating whether a private or public company should implement the upgrading of software instead of the inefficacy of the governance system. Remember, this is a country where more than a billion Aadhaar cards were issued without any hassle, and the processing of passport applications is done in a set time limit by a world-class Indian IT firm. There are more than 37 passport offices and 90 Passport Seva Kendras in the country. Around 1 crore passports were issued without delay in 2014-15.

When it comes to the number of passports issued, Kerala occupies the top spot with more than 11 lakh passports issued in 2015 alone. But with more than 60 Supplyco offices across the state, Kerala is finding it difficult to make the necessary corrections and issue the ration cards within the time limit. It clearly shows that this digitally literate state lags behind others in making the necessary software upgrade that could have made the lives of millions of Keralites easy. Governments and banks across the globe are making use of the services of various IT companies in India for improving their efficiency in delivering services. Yet, Kerala is not ready to accommodate private IT companies, as it presupposes that private companies only work for profits.

Kerala also has the credential of having the highest level of mobile and internet penetration, but the e-governance standards in Kerala are still a dream. The successive governments have not taken any strong measures to strengthen e-governance in the state. They have concentrated rather on creating more government departments, as it can help generate more employment opportunities.

All the political parties in Kerala follow the same ideology because it’s an accepted belief that the government is the major employer in the state. Kerala, despite its small population, is the state with the highest number of government departments and the highest number of government employees. If e-governance is strengthened, the relevance of most of these departments will be questioned. Hence, the political parties are not enthusiastic about strengthening e-governance in Kerala.

During the 2016 assembly election campaign, the United Democratic Front had projected the declaration of Kerala as the first digital state in the country as one its achievements. But the events that are happening in Kerala now, with respect to the ration card scheme, should not have happened in a digital state.

The Chief Minister of Kerala had exhorted government employees to attend the office regularly. The present scenario could have been a classic example to showcase how ration cards could be digitalised and applied for, just sitting at home.

As many of the cooperative banks are still debating the issuance of debit cards to stay afloat in the business, there is no wonder that the government of Kerala is still relying on obsolete service delivery models.

D Dhanuraj is the chairman CPPR.

Deepthi Mary Mathew is a Research Associate in CPPR Centre for Comparative Studies.