Real Scandal Is Not Just Kejriwal’s Legal Bills, But The Oligopoly That Jethmalani Represents 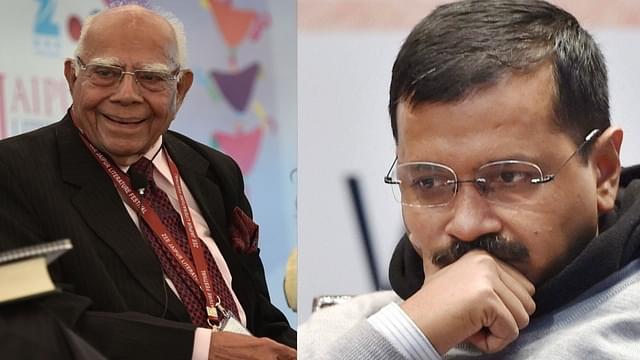 The fuss over Arvind Kejriwal’s attempt to get the citizens of Delhi to pay for his legal bills, incurred in his attempt to defame the Finance Minister, may actually be the lesser of the two scandals that are now in plain sight.

Nothing requires a sitting Chief Minister, howsoever keen he may be to root out corruption in the Delhi District Cricket Association (DDCA), which Arun Jaitley presided over for a long time, to make over-the-top allegations about the latter’s direct culpability in the irregularities spotted there. So, to claim that the allegations were made in his capacity as Chief Minister, and hence the state must pick up his legal bills, does not wash. A large part of the moral responsibility for the defamation case is personal, and, in Kejriwal’s case this has been the norm. He has been prone to making wild allegations against all and sundry even before he became Chief Minister.

Kerjiwal’s attempt to get the Delhi taxpayer to pay for his legal bills, amounting to an astounding Rs 3.42 crore, is thus indefensible.

But that is the lesser scandal. The real scandal is what this tells us about the ethics and extortionate behaviour of our senior counsel, including the irascible Ram Jethmalani, who took on Kejriwal’s defence against Jaitley’s criminal defamation suit.

When confronted with the size of his bills – apparently he charged a hefty Rs 22 lakh for every hearing he attended on behalf of Kejriwal – Jethmalani dismissed the allegations by saying even this was a discounted rate, and if Kejriwal could not pay, he was willing to forgo his fees.

He told The Times of India: “I have given a concession to Kejriwal while defending him in the criminal defamation case. I have not asked for the retainer fee I normally charge my other clients. I have also reduced the fee for each appearance in court. Moreover, I have not charged him a penny for the elaborate conferences prior to each hearing in the trial court.” He added: “I charge a fee to only those who can afford it. I fix it depending on the client's capacity to pay. If Kejriwal tomorrow says he cannot afford my fee, I will still do his case.”

This is the problem. If you are going to charge more if the taxpayer is going to foot the bill and nothing if Kejriwal declares he doesn’t have the money, what does this tell you about Jethmalani’s flexible ethics? It’s like hospitals and doctors charging you more depending on whether you are covered by medical insurance or must pay the bills yourself.

Jethmalani is entitled to his belief that he is a Robin Hood who gouges the rich to do pro bono work for the poor, but that is not the point. The point is how did we build this oligopoly among senior counsel where charges running into lakhs daily are considered normal? Who, except the very rich and the crooked, can pay this kind of fees?

Legally India, a law website, did a story on what senior advocates charged their clients, and discovered that Jethmalani was at the very top, charging upto Rs 25 lakh for an appearance, apart from retainers that run into Rs 1 crore, not to speak of conferencing fees that will be similar to the hearing fees. (Read this insightful story here.)

What this suggests is that power at the top of the legal profession rests in few hands, and the method of anointing senior counsel by the courts may be instrumental in perpetuating this oligopoly.

A story published by Mint, but again sourced to Legally India, points out that the system of appointing senior advocates is flawed, and Indira Jaising has challenged this method through a public interest litigation. She alleged in her petition that “lack of definite criteria and lack of transparency in the designations by the Supreme Court has resulted in arbitrariness, favouritism and nepotism in the designation of senior advocates.”

The Mint story also quotes a litigation partner at a law firm that “if the stakes are very high, clients expect a senior counsel. There is a perception that a judge would tend to lend more gravitas to the submissions of a senior… in the Supreme Court, I would say this is true in the case of most judges – that is, they want to hear senior counsel.”

If justice is not going to be delivered on the basis of the quality of the evidence produced or the arguments adduced, but based on who is representing a client, one wonders if this can be called justice.

Little wonder, some people are milking the system for what it is worth.

This is the real scandal, overshadowing Kejriwal’s attempts to get the state to pay for his follies, and that too to an over-charging lawyer.