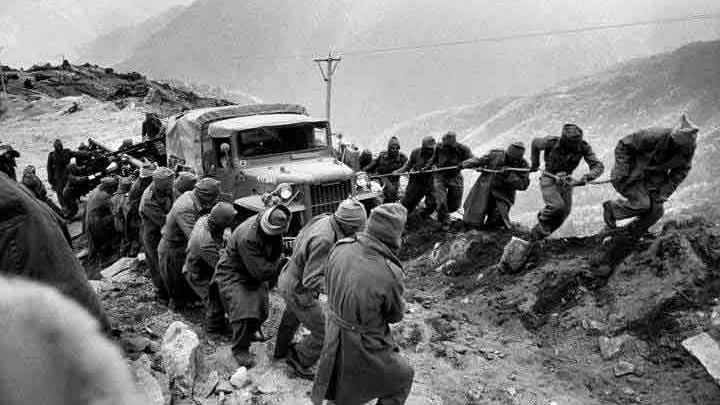 ‘Looking back, I think I should have submitted my resignation at that time. I might have saved my country from the humiliation of defeat.’

General Pran Nath Thapar, India’s Chief of Army Staff 1961–1962, in a conversation with journalist Kuldip Nayar on 29 July 1970, in Nayar’s autobiography, Beyond the Lines

It truly was a war that wasn’t.

Officially, neither China nor India ever declared war, and Chinese officials express surprise when Indians keep referring to it as one.

But while the battle in the high Himalayas in October-November 1962 might be ‘just another border skirmish’ for the Chinese, it was a bitter humiliation for India that still deeply influences our perception of and relationship with our giant neighbour.

Over 2,000 Indian soldiers died in the month-long armed hostilities which began October 21, 1962 with a massive two-pronged offensive by the People’s Liberation Army in Ladakh and Arunachal, or the North East Frontier Agency (NEFA) as it was then known.

Over 4,000 were taken prisoners of war, and an entire division of over 15,000 ill-equipped, ill-trained soldiers was routed in the face of the massive Chinese onslaught.

Much has been written on the subject, mostly blaming then Prime Minister Jawaharlal Nehru for ignoring the advice of Sardar Vallabhai Patel, who had voiced his suspicions about the Chinese as early as 1950, when the People’s Liberation Army ‘liberated’ Tibet.

“Chinese ambitions in this respect not only cover the Himalayan slopes on our side but also include the important part of Assam,” Patel had warned in a letter to Nehru dated November 7, 1950.

Post the conflict, which ended when the Chinese unilaterally announced a ceasefire beginning November 21, 1962, most of the world saw India as the victim of Chinese belligerence and betrayal.

But that perception soon changed.

Brigadier John Parashuram Dalvi commanded India’s 7th Infantry Brigade, which was decimated by the PLA on day one of the Chinese attack. Captured as a PoW by the Chinese and released in May 1963, he went on to write Himalayan Blunder, which categorically blamed the Indian political leadership –and some military top brass, including himself--for ‘India’s most crushing military disaster.’

The book was promptly banned. (the ban was lifted years later).

In 1970, Australian journalist Neville Maxwell published India’s China War, which aggressively toed the Chinese line that Nehru’s arrogant antics had left Beijing with no other option but to ‘teach him a lesson.’

Maxwell apparently had access to the Henderson-Brooks- Bhagat report, commissioned by the Indian Army after the war, to analyse the reasons for the border debacle. The report -- named after Lieutenant-General TB Henderson Brooks and Brigadier Premindra Singh Bhagat, commandant of the Indian Military Academy)-- squarely puts the blame on inept political and military leadership.

It was promptly classified as Top Secret, and remains so even today.

Maxwell, however, uploaded volume I of the report on the Internet in March 2014. Despite frantic Indian attempts to block access, the report (which begins with a quote from Sun Tzu’s Art of War) can still be found online. (Volume 2 reportedly just contains memos and other documents to back up the assertions made in the first volume.)

In July-August 1962, young Captain Ashok Kalyan Verma was transferred from 2 Rajput Battalion to the Indian Military Academy in Dehra Dun as instructional staff. Barely three months later, the entire battalion was decimated in the fierce Chinese attack on the banks of the Nam Ka Chu River in the NEFA Valley. Captain Verma, who went to fight in the 1971 war with Pakistan as a Lt Colonel commanding the 18th Battalion of the Rajput regiment, retired in 1991 as a Major General.

His book, Rivers of Silence, (Disaster on River Nam Ka Chu, 1962, and the Dash to Dhaka across River Meghna during 1971) spans two wars with very different results.

Describing the events of 1962 as a ‘national disaster,’ the first part of the book pays tribute to his unit, which was decimated in the first Chinese attack 20 October morning on an unknown Himalayan stream – Nam Ka Chu.

It vividly recounts how despite lack of political and military leadership, outnumbered, outgunned and outmanoeuvred, his comrades from 2 Rajput displayed exemplary bravery in the face of certain defeat and death.

General Verma’s son, filmmaker and military historian Shiv Kunal Verma, draws extensively from his father’s book, as well as his memories, diaries, friends and references, to write what is perhaps one of the most extraordinary book on the conflict in the Himalayas.

Three decades in the making, 1962, The War, That Wasn’t is a labour of love, sans the rhetoric and rose-tinted sunglasses.

Incredibly well researched, the book dispassionately examines events and circumstances that finally culminated with the month long hostilities in the Himalayas.

“At the time when rest of the world was exhausted from the Second World War and attention was focused on the Cold war, Chinese supremo Mao Tse-Tung (Mao Zedong) pulled off one of the greatest real estate coups of all time……..The Chinese played their cards in such a manner that the Indians lost what should have been at best a defensive war by not fighting it at all,” he says.

After setting the historical background, Verma brutally dissects how India’s security was compromised by Nehru and his ill-advised and incompetent coterie. The matter of fact recounting of how Nehru and Menon abominably betrayed one of India’s finest army chiefs, General KS Thimayya, in 1959, does not reflect a flattering image of India’s first Prime Minister.

Verma brilliantly balances the hair-raising heroism and courage displayed by our soldiers on the ground, against the ignorance, ineptitude and sheer cowardice shown by politicians and senior army leadership.

There’s the heart rending tale of Subedar Dashrath Singh, captured after an entire AK-47 magazine was emptied into his stomach, and saved by a Chinese military nurse ---who had once studied in Allahabad.


And then there’s the stories of how frightened and frantic generals ran from the battlefield at the first sign of the Chinese onslaught.

The crisp narrative echoes and reinforces the Henderson-Brooks report indictment: “comparatively, the mistakes and lapses of the staff sitting in Delhi without the stress and strain of battle are more heinous than the errors made by commanders in the field of battle”.

By vividly bringing to life the follies, faults and outright heroism that marked 1962, Verma allows us to finally accept our lapses, and honour and remember our unsung bravehearts.

And hopefully, move on.