Sabarimala Police Excess: A Brutal Legacy Inherited From The British 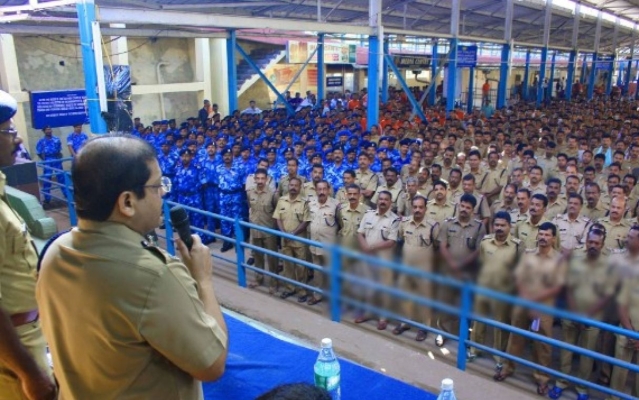 The Kerala High Court recently reprimanded the state’s Police for excesses against devotees during the Sabarimala protests. Criticising its approach, the court specifically noted that “the high-handedness of the police cannot be allowed under the guise of implementing a Supreme Court order”. The judiciary’s observation once again brings in to focus the pressing need for police reforms.

The Indian police force is largely modelled on the Irish constabulary. Its primary purpose was to reinforce the legitimacy of the British rule, which was severely jolted during the first war of Indian independence in 1857. Its original character of a coercive and paternalistic institution has remained largely unchanged over the last 160 years.

The retributive nature of the criminal justice system has further aided the police to function in an authoritarian manner. It still remains a colonial force. The use of violence is an organisational sub culture. Tales of Indian police brutality are “legendary”. The constabulary, which is the street-level bureaucracy, is poorly trained. The lack of sensitivity while filing cases or the high handedness while adjudicating petty matters, act as a deterrent and push the common man away.

This is in stark contrast to what our colonial masters have in their own land. Based on the principles put forth by Sir Robert Peel, “policing by consent” is central to the ethos of the British police forces. The police in Britain draws legitimacy from the support of its citizens. Policing is transparent, subject to numerous checks, humane and most importantly ethical. To this day, law enforcement officials in Britain are unarmed.

The Indian police force also suffers from institutional lacunae. There are dual lines of control at the higher levels. A senior police official typically reports not only to her direct senior within the police corps but also has to abide by the directives of the civilian administration. For example, the superintendent of police is in charge of a district. She reports to the director general of police (DGP), who is her direct superior. She will also report to the district magistrate, who happens to be an Indian Administrative Service officer.

The civilian supervision often eats into the autonomy of the police. This issue is further exacerbated by the refusal of the polity to maintain an arm’s length distance. Appointments and transfers are mostly arbitrary. Rent seeking is an intrinsic part of the annual transfer/appointment cycle. Central business districts in metropolitan cities often command a premium. This discretion allows both the polity and the higher echelons of the police to nurture an additional channel of unaccounted revenue. A change in government is always accompanied by a change in the top leadership of the police. As a result, policing is highly partisan and violative of natural justice.

The Indian Police Act 1861 continues to remain the de facto standard against which our policing (or the lack of it) is held accountable. We need a model policing law that is in sync with ground level socio-cultural realities and in line with the enlarged scope of modern day policing. Although there is consensus among policy-makers that a more progressive framework needs to be put in place, change has been elusive.

The National Police Commission was set up in 1979 to report on policing and give its recommendations. The commission produced eight reports and put forth a Model Police Act. However, none of the states showed interest in adopting the major recommendations. A public interest litigation was filed in the Supreme Court in 1996 by ex-DGPs Prakash Singh and N K Singh in order to draw the judiciary’s attention to the lack of progress.

Three committees were set up by the Supreme Court to design a new model police bill - the Padmanabaiah Committee, the Julio Ribeiro Committee and the Soli Sorabjee Committee. But all their recommendations gathered dust as state governments ignored them.

In 2006, the Supreme Court delivered a historic verdict in the Prakash Singh vs Union of India case directing the states to implement police reforms. This landmark judgement is popularly referred to as “The 7 directives”. These directives sought to increase police accountability and eliminate external interference.

The 7 directives are summarised below.

Arguably these directive are not holistic and do not touch upon all aspects of policing in India. There is no reference to the capacity and capabilities of the constabulary. The autonomy of the middle level police bureaucracy (the sub inspectors/inspectors/SHOs) is not sufficiently addressed. Nevertheless, the SC’s verdict gave state governments a model for their respective police acts. But so far, compliance has been poor.

All we have seen so far are piecemeal efforts by state governments to adhere to the Supreme Court’s directives. Political neutrality, which is one of the central pillars of the civil service rules continues to be held hostage to political expediency. Beyond issuing directives, the judiciary has also been largely helpless in getting the states to implement substantial reforms. The Justice Thomas Committee (2010) expressed its “dismay over the total indifference to the issue of reforms in the functioning of police being exhibited by the states”.

For a nation which aspires to be called “first world”, our law enforcement institutions embody the worst of the “third world”. It is one of India’s greatest ironies that our polity proudly rejects Britain’s aid but still clings on to one of its most antiquated legacies – the police.