BJP Looks Set To Wrest Tripura From CPI(M), But It’s Not Over Till The Last Vote Is Cast 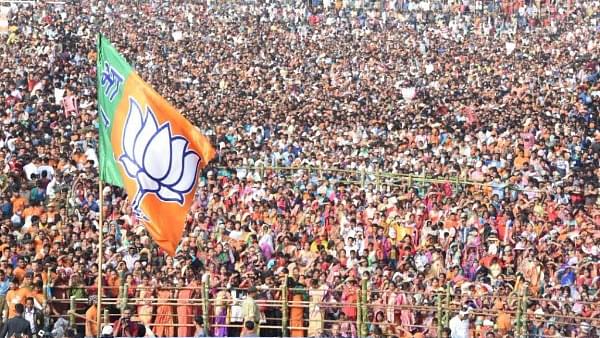 The remote northeastern state of Tripura is witnessing history in the making. A party that had virtually no presence in the underdeveloped and poverty-stricken state even till two years ago is now set to uproot the well-entrenched communists who have ruled the state for two and half decades now. And what’s more, it appears that the masses of Tripura have finally gotten over their fear of the communists to mouth the Bharatiya Janata Party (BJP) slogan “chalo paltai (come, let’s change)”.

The massive crowds that the back-to-back rallies of BJP leaders from across the country are attracting, are indication enough of the saffron wave sweeping through the state. The twin rallies of Prime Minister Narendra Modi in the state on Thursday (8 February) drew an unprecedented crowd of over one lakh people each; never before has an election rally in the state with a population of 37 lakh (and a 24 lakh-strong electorate) drawn such an overwhelming response. As the BJP’s Tripura prabhari (in-charge) Sunil Deodhar asserts, the numbers say it all.

What is significant is that, at last, the people of Tripura have mustered the courage to express their desire for change (from communist rule) so openly. “Till now, people, especially from the rural and semi-urban areas, would be afraid to even attend rallies by opposition parties. Any overt and even covert show of support for an opposition party would invite swift and often brutal retribution from the ruling communists. This change – of people picking up the courage to defy the communist terror machine and stream into rallies by an opposition party in such large numbers – is nothing short of a revolution in itself,” says state BJP spokesperson Dr Ashok Sinha.

Sinha should know: he was in the Congress and had faced many attacks from the Communist Party of India (Marxist).

The lotus-emblazoned flags of the BJP fly merrily alongside those with the hammer-and-sickle print of the CPI(M) in every nook and corner of the state. That again, as Sinha points out, is quite unprecedented. Never before has an opposition party dared to plant its flags in Tripura, except in the state capital Agartala and other big towns in the state. Notably, this time, people have defiantly hoisted the BJP flags openly in their homes. “This is unthinkable. Anyone doing so earlier would have had to face terrible consequences,” says BJP’s Bimal Chakma. The consequences would earlier range from social and economic boycott to physical attacks, denial of government benefits like ration and even forced expulsion from their village.

Deodhar, who has been permanently camping in Tripura for the last two years after being made in-charge of the state, says there is enough reason for this change and groundswell of support for the BJP. “The people of Tripura have had enough. The CPI(M) has not done anything for them and has deliberately kept them in poverty and the state as underdeveloped and backward. People are not fools and know how the rest of the country is progressing. They, too, want to go ahead in life. They no longer want to wallow in neglect and poverty. They want jobs, good roads, power and water and to lead normal lives free of terror and wanton interference by the communists. People of Tripura have run out of patience and, hence, they have revolted. The desire to uproot the communists is overwhelming,” Deodhar told Swarajya.

The BJP in Tripura has gained from the severe erosion from the ranks of the Congress, which was once the principal opposition party, as well as the CPI(M) and its left allies. Leaders and workers of the Trinamool Congress, which witnessed an artificial growth in the state (thanks to large-scale infusion of money, mostly tainted, from the party in Bengal), have switched over to the BJP almost en masse. “The Congress failed to play the part of an effective opposition and so people lost faith in that party. Often, Congress leaders were found to be secretly aligned to the communists and taking favours from the latter. The Trinamool never really struck roots in Tripura. When the BJP entered the political scene in the state and showed the guts to take on the CPI(M), people were impressed. They found in the BJP a party that could not only uproot the CPI(M), but also one that will provide good governance and usher in the much-required development in the state,” said Assam Finance Minister Himanta Biswa Sarma, who is in charge of the party’s election machinery in the state.

Sarma, who was instrumental in crafting the BJP’s win in Assam last year, says that his party’s electoral alliance with the Indigenous People’s Front of Tripura (IPFT) has been a game-changer. The IPFT is strong in the tribal-dominated hill areas of the Tripura, which has a long history of discord between the indigenous tribals of the state and the Bengali-speaking migrants from East Bengal (subsequently East Pakistan and now Bangladesh). The tribals had also turned towards militancy that resulted in a lot of bloodshed from the mid-1990s to the middle of the last decade.

The tribals, loosely termed as Tripuris, dominate 20 of the state’s 60 assembly constituencies. The left had been winning most, if not all, of these seats. But it had never allowed the tribals a strong voice and denied them their due. “The BJP has emerged as a party that enjoys support amongst both the tribals and non-tribals of the state. The CPI(M) has completely neglected the tribals and used them as mere vote banks. We have given the tribals the confidence to change their destinies for the better. They now know that after we come to power, we will usher in development in the hills, along with the rest of the state,” said Sarma.

The BJP’s optimism is corroborated by opinion polls, one comprehensive one among them being conducted by ‘Jan Ki Baat’, which has covered all the constituencies of the state extensively. This poll, with a sample size of 30,000, the largest such poll in the state till now, gives the BJP-IPFT alliance a clear win with 31-37 seats and the CPI(M)-led Left Front 23-29 seats. “Our reporters and pollsters have fanned out to all parts of the state and the remotest of areas. The BJP-IPFT alliance will get a vote share of 49 per cent to 52 per cent while the left will get between 45 per cent and 48 per cent. The BJP will gain the most in the districts of North Tripura, Gomati, Khowai (which cradled the CPI(M)) and West Tripura. The BJP will be neck and neck with the CPI(M) in Dhalai district, while the CPI(M) will edge past the BJP in South Tripura and Sepahijala districts and take a substantial lead in Unakoti district,” said ‘Jan Ki Baat’ founder Pradip Bhandari.

But, say many long-time observers of the state’s politics and even ex-CPI(M) leaders and cadres who have switched over to the BJP, the BJP should not be too complacent and sure of its win. “A lot will depend on how much the BJP is successful in countering the CPI(M)’s formidable election machinery. So far, the CPI(M) has been rigging elections extensively. Use of terror and intimidation has been its favourite poll weapons. The CPI(M) has a huge network of dedicated party cadres who will stop at nothing to win elections. It has a well-oiled election machinery that is adept at rigging elections and has perfected rigging into a fine art. Apart from terror, the CPI(M) will deploy many other tricks to rig the polls. The BJP enjoys widespread support on the ground, but does not really have the cadre base to counter the CPI(M)’s rigging,” said Krishnadhan Nath, a retired bureaucrat and CPI(M) supporter who has now joined the BJP.

Nath, who headed the census machinery as a former director of census operations in the state, says there are an estimated 1.71 lakh fake voters in the electoral rolls that the CPI(M) will try to take full advantage of.

Tripura’s bureaucracy, especially its lower bureaucracy, is highly politicised and beholden to the CPI(M). “The petty bureaucrats and the state police who will man the polls down to the booth level function more as CPI(M) cadres and actively aid in the rigging of the polls. They are a totally biased lot,” said Nath.

Deodhar also says that the election machinery in Tripura is biased. “In fact, that is the first thing I told Prime Minister Modi yesterday (Thursday),” he says. The BJP will have a tough task on its hands ensuring that the poll officials are stopped from helping the CPI(M) cadres rig the polls. What is, however, expected to work in the BJP’s favour is the extensive deployment of central paramilitary forces. “But the Election Commission has to ensure that the central paramilitary forces are not controlled and managed by the state police. The state police should not be allowed into polling stations and booths where they can play mischief and help the CPI(M) cadres,” said Nath, who also has a lot of experience in conducting elections in the state and has witnessed rigging of polls by CPI(M) cadres.

But, says Deodhar, it is the will of the people that will ultimately triumph. “I complained to (Union Home Minister) Rajnath Singh about the possibility of rigging by the CPI(M). He asked me how much can the CPI(M) rig the polls. He asked me if the CPI(M) can subvert the will of the 37 lakh people of Tripura. I don’t think the CPI(M) can do that at all. But we are on our guard and are more than capable of defeating any evil designs of the Marxists,” asserted Deodhar.

The people of Tripura can only hope that Deodhar’s optimism does not turn out to be misplaced and the will of the people, now being resoundingly voiced through their full-throated ‘chalo paltai’ slogans, will find reflection in the poll results in early March.