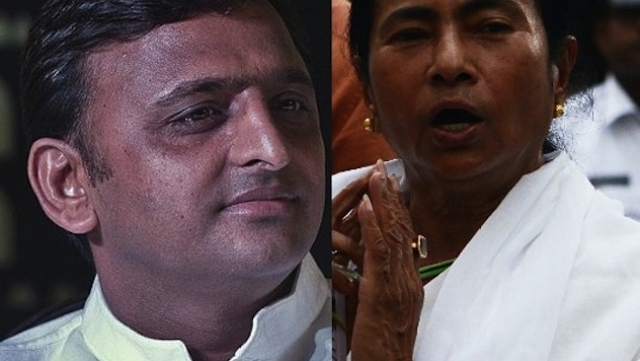 Trinamool Congress has no base in Uttar Pradesh. The lone TMC legislator Shyam Sundar Sharma joined the Bahujan Samaj Party in June this year. While Mamata Banerjee, the TMC chief, may still be harbouring a grudge against Mulayam Singh Yadav for ditching her during the 2012 presidential elections it did not stop her from seeking Samajwadi Party’s help for her protest rally in Lucknow on Tuesday.

Without the support of chief minister Akhilesh Yadav the rally would have been an embarrassing fiasco.

It would be a misnomer to call it a rally as the crowd comprised mostly of Samajwadi Party workers and a few passersby. Thanks to the Samajwadi Party, Mamata was saved the blushes.

Strange are the ways in which the Opposition is reacting to the weeding out of the high denomination currency notes. While Akhilesh extended Mamata the courtesy of personally receiving her at the Amausi airport and sending his young brigade members like minister Arvind Singh Gope, Pawan Pandey and Anand Bhadauria besides minister Ravidas Mehrotra and SP leader Kiranmoy Nanda to attend the event along with a few hundred of party workers, he himself decided to give skip it.

It was rumoured that the chief minister who planned to join Mamata on the dais was, for some reasons, restrained by his father Mulayam Singh Yadav. It is mystery why Akhilesh stayed away from the rally while providing Mamata all the support.

The Bengal chief minister, however, called it a joint protest by the SP, AAP and the Trinamool Congress. By any yardstick it was an SP show to help Mamata.

Attacking Prime Minister Narendra Modi for asking all BJP members of Parliament to furnish details of their bank transactions after November 8, Bengal chief minister Mamata Banerjee said that he and Amit Shah should be the first to disclose their transactions.

Mamata alleged that a lot of land was purchased by BJP leaders just before the PM declared old Rs 1000 and Rs 500 notes as illegal tender.

As the Bengal chief minister tore into Prime Minister Narendra Modi for his decision on high denomination currency notes there was hardly a few hundred people gathered at the 1090 Crossing, not far from chief minister Akhilesh Yadav’s official residence at 5, Kalidas Marg.

Telling the people that they should retaliate to “notebandi” by denying votes to the BJP in the coming elections (“votebandi”), the TMC leader said that all the parties were working against demonetization although she seemed more in an ekla chalo mode.

She said that Modi government’s decision was politically motivated in view of the coming assembly elections in Uttar Pradesh, Punjab and Uttarakhand.

At one stroke all the people had been made to look like thieves, as if the Prime Minister was the only big saint in the country, the TMC chief said.

Mamata said that Indira Gandhi had declared Emergency while Modi, “who says something and does something else”, had “looted the country without declaring Emergency”.

Mamata warned the people that after snatching ‘stree dhan’, the future of children, jobs and money, Modi would now snatch their houses.

“After Independence the country was progressing but look where is the country going today. Shops are closed and agriculture is at a standstill as banks don’t have 100 and 500 rupee currency notes,” the Bengal CM said.

While Mamata’s speech lasted barely 22 minutes, the wait for her was much longer. Originally slated to speak at 1 pm, she reached the venue an hour late. It was said that she was trying to persuade Akhilesh to join the rally but her UP counterpart did not oblige.

Much of the crowd dispersed after learning that Akhilesh won’t be addressing them.