Sanitation Workers In Bengaluru May Still Be On The Edge 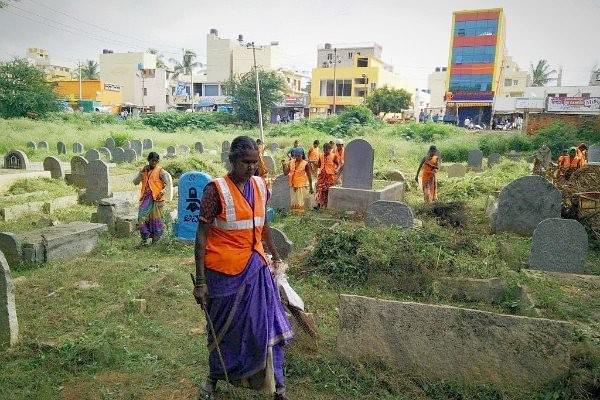 Is the plight of Bengaluru’s sanitation workers, or pourakarmikas, still the same as it was a couple of months ago?

Yes, going by some of the city’s pourakarmikas.

A couple of months ago, a sanitation worker, Subramani, of Vyalikaval ward committed suicide after he was unable to face the situation arising out of non-payment of salaries.

A worker from ward 49 (Lingarajapuram) told Swarajya that despite the Bruhat Bengaluru Mahanagara Palike (BBMP) putting in place a biometric attendance system, pourakarmikas have not received their salaries for March, April, May, and June.

The worker, on the condition of anonymity, alleged that there is a lobby that is pushing for cancellation of the biometric attendance system for men only.

The wage issue is among some of the problems that the sanitation workers are facing in Bengaluru. They have held at least two public protests this year – first in March and then in May – demanding improvement in their working conditions. Besides wages, workers are also seeking regularisation of their services. At least 30,000 workers or pourakarmikas are engaged by BBMP for sanitation work, and some 4,000 of them are permanent.

Some of the workers are aged and have been employed as daily hands for nearly 30 years now. The sanitation workers’ contention is that if they go on a strike, like their counterparts in Delhi, Bengaluru could face untold misery. The city is one which does not score high from the sanitation point of view and, if the garbage is not cleaned, the city could get mired in health problems. Already, the city is ineffective in disposing its solid waste, resulting in increasing cases of dengue.

While permanent workers are eligible to avail of various benefits, including weekly offs and holidays, pourakarmikas have to work on all days, including on national holidays.

A sanitation worker claimed that her supervisors were not allowing them to take their mandatory offs on Wednesdays or Sundays and they were being “overworked”. When asked why, she claimed that since the paymasters had “absolute control” over finances, they could do as they pleased.

She alleged that the corporation was not prompt in providing them with basic infrastructure such as uniforms and gloves, as a result of which their health was at risk. They also are handicapped because they haven’t been given any equipment to handle hazardous wastes.

The worker claimed that during the current rainy season, getting public transport on time was a problem and, on many occasions, they could not reach work on time. Owing to the biometric attendance system, late-coming was being penalised by the contractors. The result was pay cuts, leading to further misery for them.

Another sanitation worker said her husband had passed away a few years ago and, since she had to manage the house all by herself, she found it tough to ensure her children reached school safe as well as report to work on time. She felt that the corporation, its officials, and contractors should show some consideration to women who reported late as Bengaluru is a bustling, fast-paced city with heavy traffic at any time in the day.

When contacted, Sarfaraz Khan, Joint Commissioner (Solid Waste Management), BBMP, rejected the charges and told Swarajya that the allegations by pourakarmikas were not true as of date. In the aftermath of the payment crisis, all efforts had been taken by the corporation to ensure that workers’ salaries were being paid on time.

Another source in the corporation, who did not want to be identified, said as of now there really was no payment crisis in the Palike and that the corporation had streamlined the disbursal system. If at all there were cases of non-payment, they would be at the supervisory level and not at the corporation level. This, at best, was an exception rather than the norm, he said.

The Karnataka government had raised the wages for pourakarmikas two years ago, but the workers feel that the compensation is poor, given the risk they take and the delay in paying them. “We got this wage only after a long struggle,” says the ward 49 worker.

K J George, currently the state minister for large and medium industries, had assured sanitation workers that their problems were solved when he was the minister for Bengaluru Development and Town Planning in the Siddaramaiah government. But the woes of the sanitation workers remain. And the situation isn’t a good one for Bengaluru city, which is bursting at its seams!