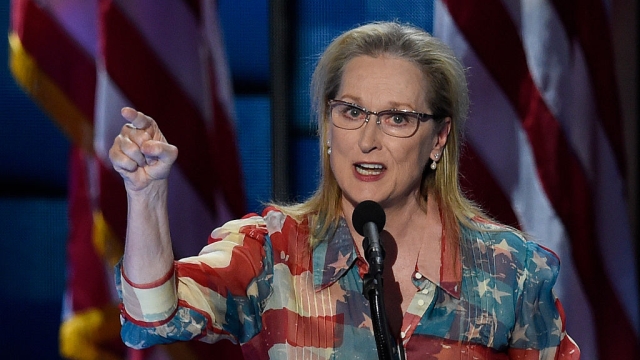 Streep addresses the evening session of the Democratic National Convention at in Pennsylvania. (SAUL LOEB/AFP/GettyImages)

Ever since Meryl Streep’s speech at the Golden Globes award ceremony, where she attacked United States President-elect Donald Trump without mincing any words, she has not only become the darling of the Alt+Left establishment in India, but she has also become the standard Bollywood celebrities were expected to live up to.

There’s also been much venting of angst about how Indian stars never speak up like this. The spineless capitulation by Shah Rukh Khan and Karan Johar to the Shiv Sena and Maharashtra Navnirman Sena goons to ensure release of their films starring Pakistani artistes has been held up as a lamentable contrast to spirited Streep.

Suddenly, everyone seems to have forgotten about the award wapsi campaign of two years ago, especially the fact that four top film makers were part of it – Dibakar Banerjee, Anand Patwardhan, Kundan Shah and Saeed Mirza. Perhaps they are not mainstream enough? But that did not seem to be a problem when they were being hailed for returning their awards over Rising Intolerance.

Have mainstream stars never taken a political stand, ever?

One oft-cited example is that of Kishore Kumar whose songs were banned from All India Radio (AIR) and Doordarshan during the Emergency because he refused to sing at a Congress rally in Mumbai. But it is not clear – and will never be clear – if Kumar took this stand as a protest against the Emergency or because of his own eccentricities.

Dev Anand – quite the mainstream star in the 1970s – did take a stand. According to this account, he repeatedly refused to succumb to pressure to do programmes for AIR and Doordarshan and also stayed away from a meeting of film artistes called by Vidya Charan Shukla, the infamous information and broadcasting minister. Were these quiet actions less brave than a stirring speech?

But if speeches are the litmus test, it is surprising why one speech by the darling of the Alt+Left brigade has gone unmentioned. It took a film journalist, Bharti S Pradhan, to remind everyone. On 12 January 1989, Shabana Azmi, on stage at the national film awards ceremony to receive an award read out a short statement to protest the killing of theatre activist Safdar Hashmi two weeks earlier. Why was this significant? Because this was during the time of the Rajiv Gandhi government and Hashmi was murdered by Congress workers.

This writer – and Swarajya – are far, far away from Azmi’s political leanings. Yet, it bears pointing out, as Pradhan has done, that unlike Streep, who was speaking at a function organised by a private organisation (the Golden Globes awards are conferred by the Hollywood Foreign Press Association), Azmi was speaking against the ruling party at a government function at which the information and broadcasting minister was present. Is that not way sassier than Streep? As Pradhan points out, Azmi of 1989 had more at stake than Streep of 2017.

It is possible to quibble about Azmi’s intervention – Hashmi was a hard-core leftist, as is Azmi; would she have spoken up if an ideological opponent had been in his place?

But another question needs to be asked – has the glossing over of her short speech got to do with the fact that she had spoken out against the Congress? If the BJP had been in place of the Congress at that time, would her speech have been forgotten at all and would there have been laments about the pusillanimity of Indian film stars? Or would the Alt+Left have been pointing out – nose up in the air – that India had its own sassy Shabana 30 years earlier.

Is this an unwarranted and unseemly jibe? Perhaps. But the duplicity of the Alt+Left in India makes it necessary to ask this question.