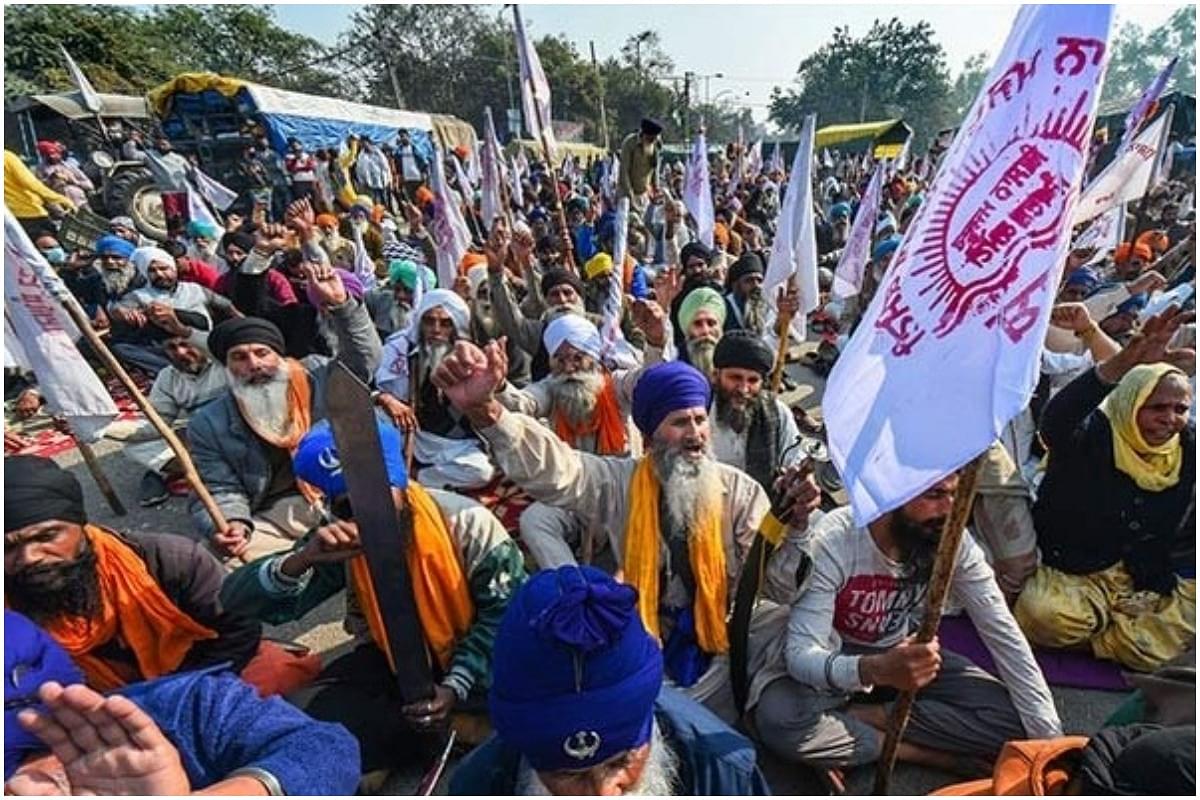 The barbaric mutilation and murder of a poor labourer at the Delhi border by a group of Nihang Sikhs is only the latest in a series of such killings over ‘blasphemy’ of the Sikh religious text in recent times.

The most recent lynching

On Friday morning, the body of a man clad in nothing but his underpants was found hanging from an iron frame at Singhu, where farmers from Punjab have been camping for almost a year against the proposed farm bills.

The man’s wrist had been severed and, to add to the horror, the severed hand was hung from the same iron frame.

The victim, 35-year-old Lakhbir Singh, was killed for allegedly ‘desecrating’ a Sikh religious text kept at the protest site.

In several videos that have been circulated on social media, a group of Nihang Sikhs can be clearly heard saying that the man had been killed for barging into one of the tents and insulting the religious book.

In one of the videos, a Nihang Sikh is seen addressing a crowd even as the victim is lying on the ground, his wrist chopped off and lying near his head.

Pointing to Lakhbir, the Sikh man says that he had done “beadabi” (disrespect) of ”Guru sahib”. The group goes on to interrogate Lakhbir about his name, his place of residence and other details.

In another video, a Nihang Sikh leader is seen telling a journalist that it is the “maryada” of the community that whoever disrespects the religious texts, is subjected to violence.

When the journalist asks the leader if the violence includes killing, the leader gives this explanation: He says that it’s been quite some time that Sikhs have been witnessing repeated insults of their religious text including Guru Granth Sahib. It’s pertinent to mention here that the Guru Granth Sahib is revered by Sikhs as a living Guru, so much so that its pages are called ‘Ang’ (organs).

He complains that when they hand over the culprits to the police, they are released in no time.

The killing of Lakhbir Singh, from all accounts so far, is a killing over blasphemy.

Not many might know this, but the killing is only the latest in a series of such murders by the Sikh community.

Last year, the father of a man accused of ‘desecrating’ a copy of the Guru Granth Sahib was shot dead in Bhagta Bhaika town of Punjab’s Bathinda district.

The victim, Manohar Lal Arora, was said to be a member of Dera Sacha Sauda founded by Gurmeet Ram Rahim Singh, who is currently serving a 20-year jail sentence for rape.

A gangster named Sukhpreet Singh alias Sukhi Gill Lamme took responsibility for the murder through a Facebook post. The post said that his brothers Harjinder and Amana had carried out the killing in response to the insult of the sacred text.

Arora’s son Jimmy was accused of being involving in a sacrilege case in Gurusar village in 2015, when pages from a copy of the Guru Granth Sahib were found thrown in the streets.

In June 2019, a man named Mohinder Pal Bittu was murdered in the high-security Nabha prison by two fellow prisoners.

Bittu had been in jail since 2015 in a case of disrespect to a copy of the Guru Granth Sahib in Punjab’s Bargari. India Today quoted the Inspector- General of Patiala range, AS Rai, as saying that both the attackers were baptised Sikhs and they told the police that they had attacked Bittu because he was the main accused in the Bargari case.

Bittu was also a follower of Dera Sacha Sauda. The attackers reportedly removed an iron rod from a barricade and beat Bittu to death.

In September 2016, a woman named Balwinder Kaur from Amritsar was killed by her husband Labh Singh. Balwinder was accused of disrespecting Guru Granth Sahib by entering the sanctum santorum of a gurudwara witch slippers on in November 2015.

Labh Singh initially tried to mislead the police that some hardliners were behind the killing, but later confessed to the killing.

News reports quoted police as saying that Labh Singh said that he was very upset with his wife after the sacrilege episode and the couple constantly quarrelled over this.

The woman was out on bail after being booked and arrested for ‘desecrating’ the Sikh religious text the previous year.

The fleeing assailants dropped a written note that they had 'avenged' the sacrilege. Kaur was accused of insulting the Guru Granth Sahib by tearing some pages from it.

As per reports, no witness came forward to testify to the murder.

She belonged to a Scheduled Caste. Before her murder, she was excommunicated by her village.

Later, two men, Gurpreet Singh and Nihal Singh, surrendered before the police, saying that they did not want senior leaders from the community to be implicated. A Sikh religious body, Guru Granth Sahib Satkar Committee, reportedly came forward to support the two in the legal case.

It’s pertinent to mention here the issue of sacrilege of copies of Guru Granth Sahib has taken centrestage in Punjab society and politics in recent years.

Most cases date back to 2015. Of them, three are considered to be major ones including the Bargari case. Others include cases in Faridkot’s Burj Jawahar Singh Wala village.

In the first case, a copy of the religious book was found stolen from a gurudwara. In the second case, posters criticising Sikh preachers were found pasted on a wall.

The poster contained a threat that copies of the religious book would be thrown in the streets in Punjab if Gurmeet Ram Rahim’s film ‘Messenger of God’ was not allowed to be released.

In October 2015, more than 6,000 villagers in Faridkot staged a protest against the sacrilege cases, where both police and the Sikh protesters exchanged fire. More than 50 people, including 24 policemen, were injured. At least two protesters died in the violence.

The same year, the then Akali government in Punjab handed over the cases to the CBI for investigation.