So Why Did Sasikala Quit? Here’s A Review Of All The Conspiracy Theories 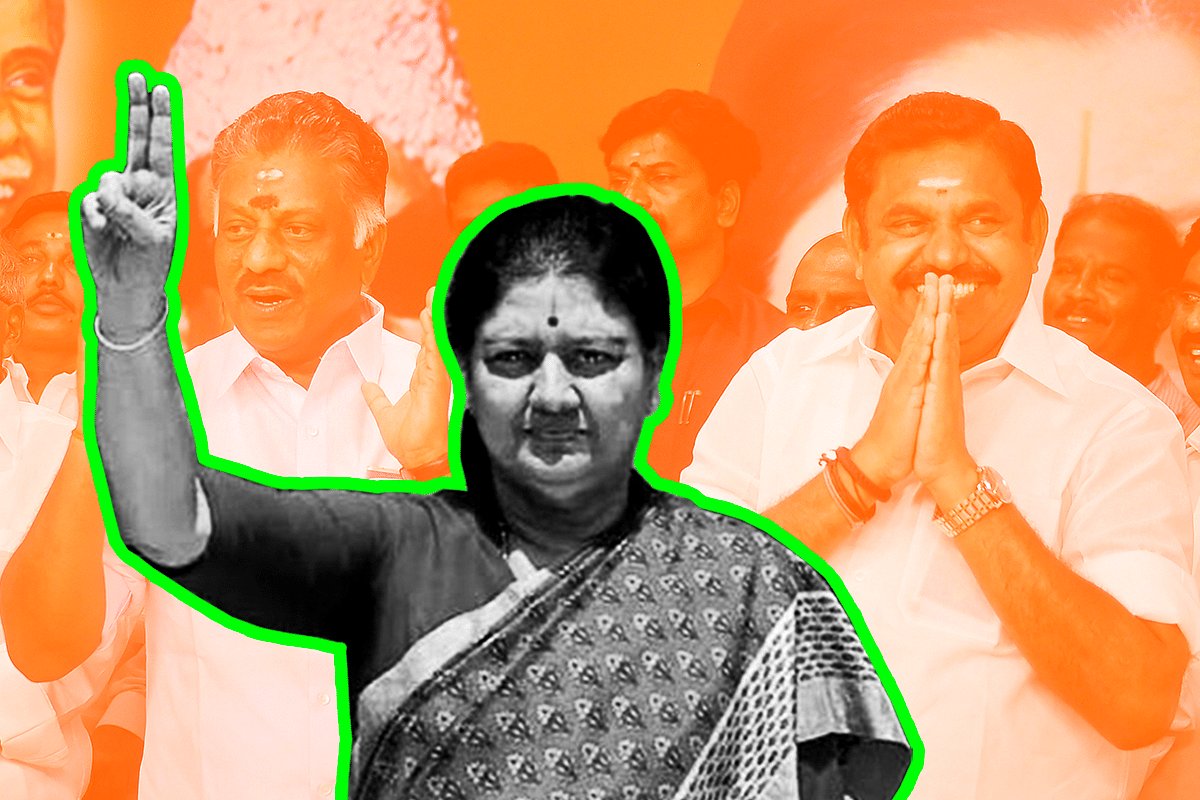 As a Kongu Vella Gounder myself, it is rather gratifying to see all the roadblocks to the re-election of Tamil Nadu Chief Minister Edapadi Palaniswamy (EPS) being removed one by one.

Earlier, there was a lot of buzz about Tamil movie star Rajinikanth entering politics — but he seemed to have developed cold feet at the last moment and withdrew.

Yesterday was the turn of V K Sasikala, the erstwhile patron of EPS and the closest confidante of former chief minister J Jayalalithaa. While Sasikala's last bid to become chief minister was thwarted by a rebellion from within the party, and an imprisonment (thanks to conviction in a disproportionate assets case) she isn't even trying this time. Or so she claims.

Last evening, she put out an announcement in which she claimed that it was important to defeat the common foe (ie, the main rival party, the Dravida Munnetra Kazhagam) and that she was retiring from politics.

But Sasikala wasn't always signalling her intention to quit. Only a few days ago, following her release from the Parappana Agrahara prison, where she had just finished serving out her sentence, she chose to travel in a car with the All India Anna Dravida Munnetra Kazhagam (AIADMK) party flag affixed on it.

She was accompanied by dozens of cars, participated in welcome parties, hosted meetings in every town and ended her trip to Chennai with a flourish — a visit to the AIADMK party founder Dr M G Ramachandran's house.

Following her arrival in Chennai, she chose to meet some celebrities and minor political figures in the state capital. All these were not activities of someone looking to quietly go into the sunset.

According to a source cited by The New Indian Express, this announcement may be a “comma, but not a full stop”. According to this theory, Sasikala is merely buying time and waiting to see if EPS would perform well in the elections — and if he didn't, the party would always welcome her, given the loss of power and lack of a centre of gravity in the system.

Choosing to rock a well-oiled electoral machine just a month before the polls would not particularly earn her any goodwill with the strong party organisation that the AIADMK has built.

Besides having to disrupt an AIADMK that is now looking increasingly confident, there is the issue of having to perform well in polls if she chooses to be a contestant. While hundreds of cars and welcome parties may have been arranged on her return to the state, the harsh truth is that the party of her nephew T T V Dhinakaran — Amma Makkal Munnetra Kazhagam — doesn't seem to be going anywhere. Why risk a defeat when you can protect your reputation by sitting out this round?

A few other reports hint that the Bharatiya Janata Party (BJP) may have been behind the move. The central postulation of this theory is that the high command of the BJP was behind keeping Sasikala out of power and that the BJP played a key role in keeping the factions within AIADMK united after Sasikala's imprisonment.

The theory further suggests that the BJP may have indicated a revival of cases against Sasikala if she played spoilsport to the AIADMK-BJP alliance.

It is worth recollecting that in December 2019, news reports suggested that Sasikala was able to buy properties worth Rs 1,600 crore, and that IT sleuths told The Hindu that they retrieved documents and received statements indicating Sasikala had laundered or exchanged demonetised notes worth more than Rs 200 crore.

In October 2019, the Income Tax Department had indeed issued a notice to Sasikala asking why Rs 1,911.50 crore should not be declared as her undisclosed income. Her last imprisonment was for a much, much lower figure of disproportionate income.

The most touching theory came from The Indian Express. The newspaper reported that a source close to Sasikala indicated that since she had lost her patron (Jayalalithaa, affectionately called as Amma by loyalists), her husband, who died a few years ago, having served a long prison sentence and being without children — what reason does she have to fight for anything?

"She has no children, nobody is there to look after her at this age. And if she has to save the party also, she will have to fight for it, wasting her complete energy. But for whom she should achieve all that?” the source is quoted as saying.

Dripping as it may be with sentiment, it's tough to find anyone who would buy this last theory. Most are going with a variation or combination of theories one and two.

But if you were to set aside all these ideas, crazy or not nobody knows, the key takeaway is that EPS has one problem less to worry about. Some of us in Kongu Nadu, where EPS is from, are celebrating that for now.